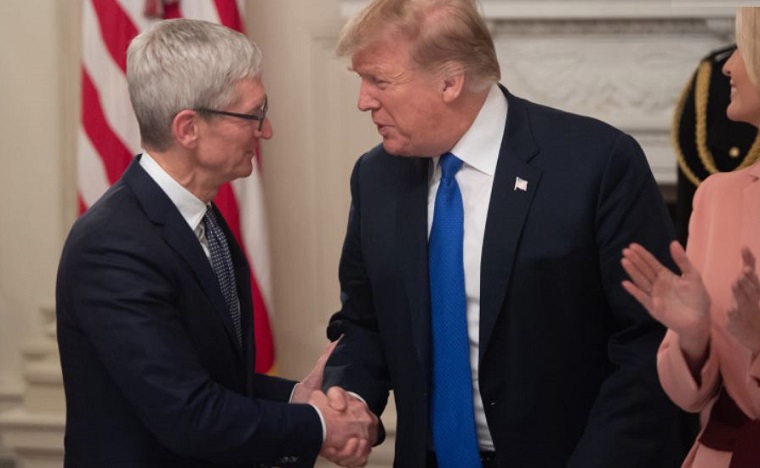 On Tuesday Patently Apple posted a report titled "President Trump will reportedly Tour Apple's Mac Pro Plant in Texas as soon as next Week." Today it's being reported that the tour is likely to take place next Wednesday, according to sources familiar with the matter.

Reuters is now reporting that "The trip will highlight Cook’s strong relationship with Trump as he seeks further relief for Apple from U.S. tariffs on imports from China and will be cited by Trump as part of his efforts to convince companies to add more U.S. manufacturing jobs.

Earlier this month, Apple also asked the Trump administration to waive tariffs on Chinese-made Apple Watches, iPhone components and other consumer products, according to filings with trade regulators.

To strengthen Apple's position with the Trump Administration, Apple has reportedly hired one of President Donald Trump’s closest allies in Washington, D.C., Jeffrey Miller to lobby on its behalf as it looks to avoid getting hit with another round of tariffs, reports CNBC.

Miller’s firm effectively registered to lobby for Apple in October but the disclosure report was signed by him on Thursday, the document said. He was vice finance chairman of Trump’s inaugural committee before he became a top fundraiser for the president’s reelection campaign.

The move by Apple to turn to Miller comes as it formally requests to have some of its products be excluded from another set of tariffs that may be set in motion by December if the United States and China don’t come to a deal that would end the ongoing trade war. For more read the full CNBC report.

Note: The press is claiming Apple has hired "Jeffrey" Miller and yet continue to show images of "Stephen" Miller.