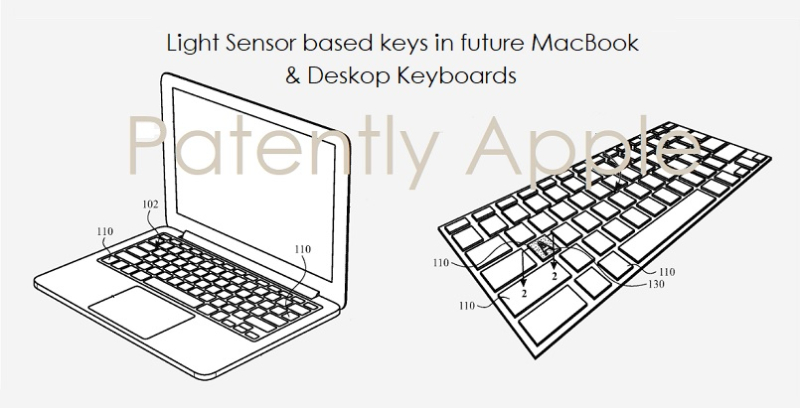 On November 13, Apple introduced their new MacBook Pro 16" model that includes their desktop Magic Keyboard design retrofitted for the new MacBook Pro, abandoning the butterfly key design for the MacBook Pro only. In the big picture, Apple may abandon mechanical switches in the future for an all new architecture using light sensors.

Phil Schiller told CNET in an interview this month that "Keyboards in general are a lot of work. People sometimes underestimate how much work goes into a keyboard, and that's why most keyboards in the industry don't change for 10 or 20 years. Adapting that to a notebook is more work. It's not impossible, but it's definitely a lot of work."

This summer Apple was granted a patent for a possible next-generation keyboard patent under number 10,394,341. Apple filed this patent in Europe this week under application number 16529638 while filing a continuation patent a week earlier in the U.S. that we originally missed.

The patent interestingly shows that Apple engineers are in fact looking into a possible new keyboard design that departs from anything known in the past. It's based on keyboards having keys that use light sensors to determine when a key has been struck instead of using mechanical switches.

In accordance with some aspects of Apple's invention, a key such as an electronic input key of a keyboard may be provided with a keycap and a light sensor that detects changes in an amount of received light caused by a motion of the keycap when a user presses the key.

The amount of received light may be used to determine one or more key input functions of the key. The key may also include a light source that provides the light sensed by the light sensor.

Apple's use of the term "electrical make' is referring to the current way keys are made in keyboards using electrical circuits completion to register a key strike versus using light.

Apple's patent FIGS. 1 and 2 below illustrate the targeted keyboards that could use a next generation keyboard where keys use light sensor instead of mechanical mechanisms to trigger a response on screen; FIG. 5 represents a top view of an example switch housing of a key. 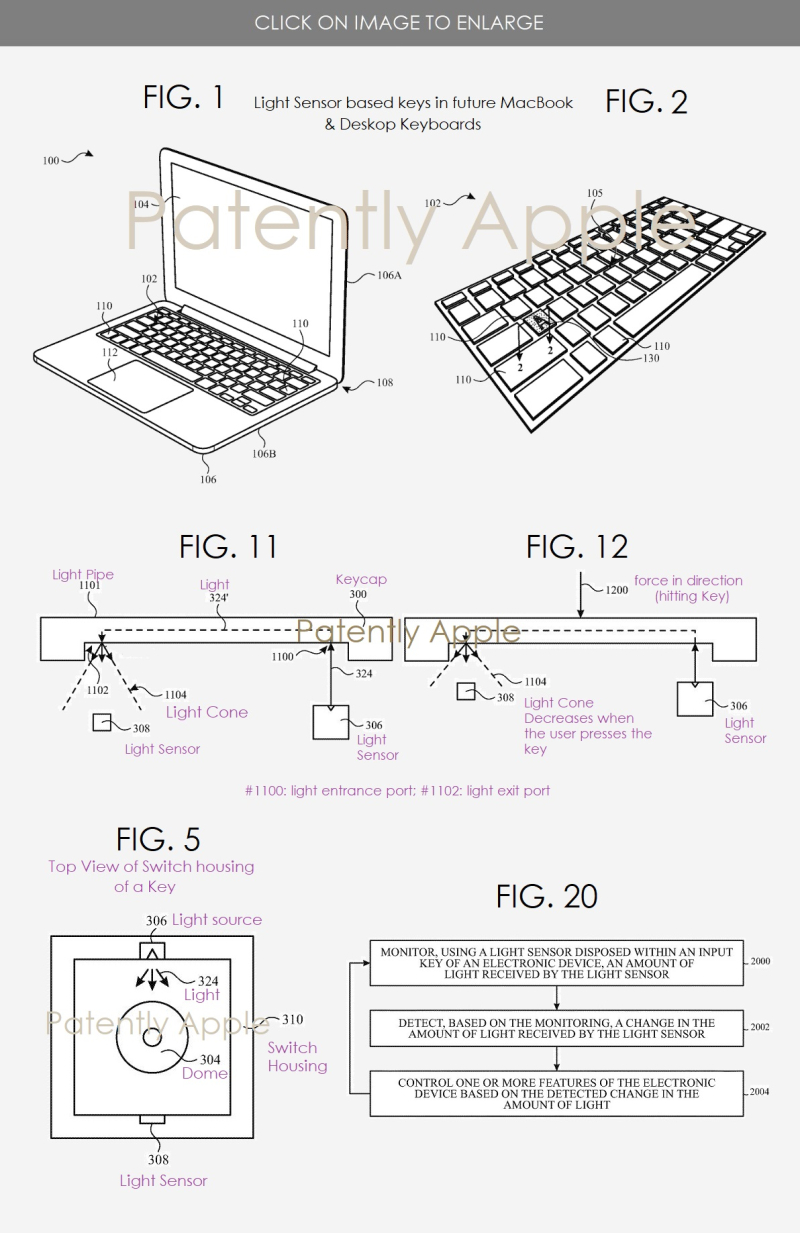 Apple's Patent FIG. 11 above illustrates a schematic cross-sectional side-view diagram of a key having a keycap with a light pipe structure FIG. 12 is the same key but compressed when a user hits the key; FIG. 20 illustrates a flow chart of an example process for obtaining user input with a key having a light sensor.

While the focus of the invention is about keyboards for Apple computers, Apple hints that the principle of the new key design may apply to other devices like a door bell or entry keypad and other devices using fewer keys.

The changes made to the original patent claims granted this summer are highly technical and difficult to find. In one change or addition Apple notes "wherein the detected change in the amount of the received light determines a key function input of the key, wherein a location along the leg portion is configured to buckle at a time during motion of the keycap from the uncompressed position to the fully compressed position, and wherein the key function input is coordinated with a predetermined change in the amount of the received light corresponding to the time of the buckle."