The size of the global market for true wireless hearables reached 33 million units (USD 4.1 billion) in Q3 2019, growing 22% QoQ, according to the findings of a mew Counterpoint Research Hearables report.

Geographically, the US accounted for 31% of the global market and exceeded 10 million units for the first time in a single quarter. China has recently expanded remarkably and grew 44% QoQ in Q3.

Apple continued its leadership by growing sales of their second generation AirPods Pro, but its share fell to 45% in Q3 from 53% in the previous quarter, due to growth among second-tier players, according to Counterpoint. However, Apple's Beats came on strong in Q3. So Apple + Beats combined would provide Apple with over 50% of the market. 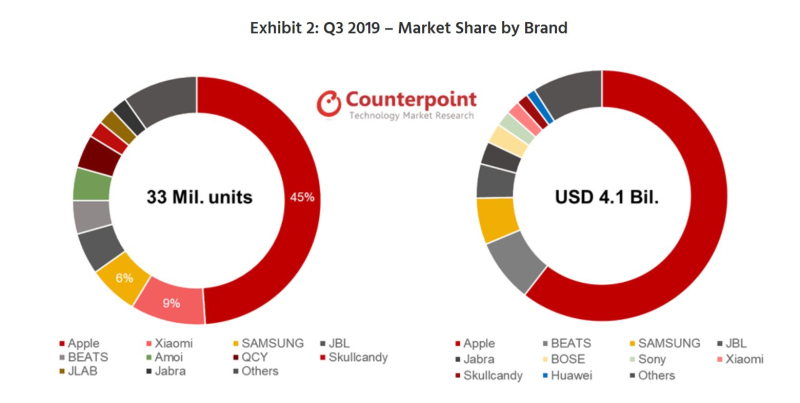 To confirm that, Counterpoint added that "JBL and Beats were the following leading brands and ranked fourth and fifth, respectively. The market share of their new premium models, such as Beats Powerbeats Pro in May, have increased significantly, boosted by favorable market reviews of sound quality and design by consumers. While Counterpoint failed to provide percentages for the U.S. market, clearly the pie chart indicates Apple's market share is somewhere in the 60-65% range.

Since new powerful models, such as Apple’s AirPods Pro, Amazon Echo Buds, Microsoft Surface Earbuds, consumer interest is increasing. Given the recent growth momentum and the effect of year-end promotions, such as Singles’ Day, Black Friday and Christmas, the Q4 market is expected to show further high growth. Thus, Counterpoint Research expects the annual market to reach 120 million units in 2019.

Liz Lee, Senior Analyst at Counterpoint Research, said, “The recognition that true wireless hearables are the most useful and convenient smartphone accessories is spreading fast among consumers.

The elimination of inconvenient wires, sophisticated designs with advanced features such as active noise cancellation is proving a significant purchase motivator.

In late September, Patently Apple posted a report titled "In the U.S., Apple's AirPods are the most Preferred Choice of Hearable for Future Purchases."

Our report covered a Counterpoint report that stated that "Apple’s AirPods, a true wireless hearable device, turns out to be the preferred choice for future purchase due to factors like ease of use, comfort & fit, and portability. Further, Apple also edged rivals because true wireless as a category is the preferred choice over wireless earphones, due to factors like better sound quality, portability, and ease of use." 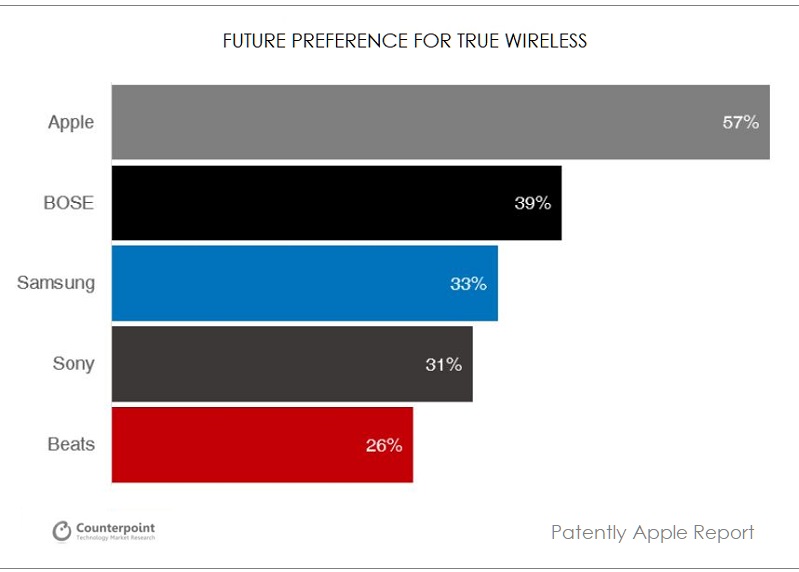 And lastly, in a separate report published this morning, CNBC reports that "Consumers are gearing up for the holiday shopping season, and Apple, Nike and Louis Vuitton could be the big winners in the key teenager demographic, according to a new survey from Piper Jaffray.

The firm conducted a survey of more than 1,000 US consumers, ranging in age from 18 to 65. After analyzing the responses from the upper-income teenage cohort, Piper Jaffray found that Apple was the 'top-listed consumer brand for teens,' with AirPods the top desired product." For more read the full CNBC report.