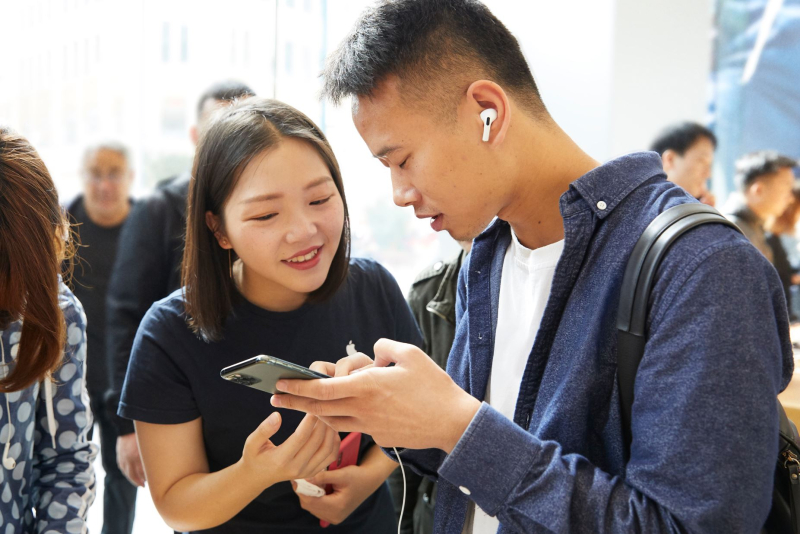 Apple AirPods’ runaway popularity is boosting wireless headset and part makers in China – and investors should be listening, according to Chinese analysts.

A new Asian report today states that the "The wireless earphones are Apple’s second fastest selling product of all time, only behind the iPhone. Now its more expensive AirPods Pro – which include such features as noise cancellation – is a hot seller, too. The stampede into so-called true wireless stereo earbuds is in its early stage, analysts say, as consumers ditch their old wires for the cooler look and improved sound.

Zhongtai Securities analysts wrote in a new report that "True wireless stereo will become the next big thing in consumer electronics. It will become the next product that could 'create a growth miracle' after the smartphones, which have experienced what seems like a topping-out in output after years of rapid growth."

Chinese companies like Luxshare Precision Industry, the main assembler of AirPods – are benefiting. It’s up more than 200 per cent this year while Apple's second assembler GoerTek is up 193 per cent this year, though GoerTek's growth includes contracts from Huawei.

Luxshare is likely to become the major supplier to AirPods with a 60 per cent to 70 per cent share in 2019, Zhongtai Securities said in its report. 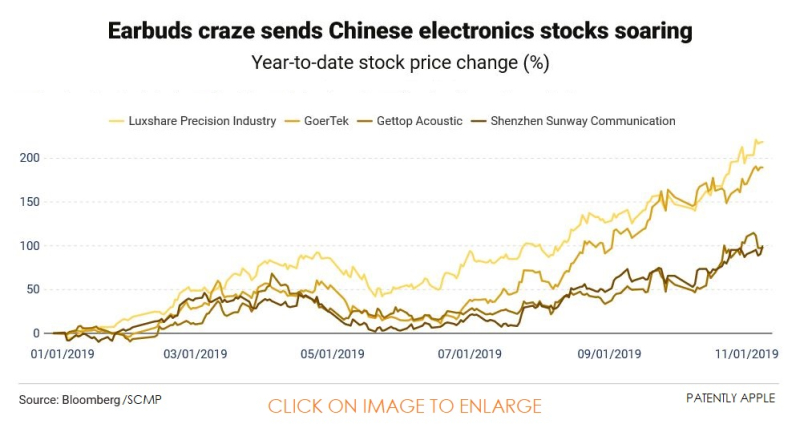 analysts Liu Xiang and Liu Shang at Zhongtai Securities wrote in their report that "There are about 900 million to 1 billion iPhone users worldwide, so the saturation ratio of AirPods among the existing users is not even 10 per cent. That represents huge room for growth."

Analysts say the quality of AirPods – the convenience of its small size and its stable Bluetooth connection to the iPhone – rocketed this type of product to new heights. It single handedly set off a massive trend with its launch in December 2016.

Fast-growing sales in AirPods are a bright spot for Apple. AirPods led the company’s wearable products, with sales surging by 54 per cent quarter-on-quarter for the period from July to September, while revenue from iPhones dropped 9 per cent and that from the Mac personal computers weakened 5 per cent.

Shipment of AirPods skyrocketed by 150 per cent to 35 million units last year from 14 million in 2017, data from consultancy Counterpoint Research shows.

Alex Ng, analyst at CMB International Securities who specializes in technology sector told the Chinese publication that "Apple is leading the technology advancement in wireless earphones. It’s a whole new market." Ng added that "What is even more stunning, is how Apple was able to hike prices at such a fast pace – the latest AirPods Pro is 56 per cent more expensive than the first generation, priced at US$159."

During Apple's Fiscal Q4 2019 Conference Call in late October, Apple's CEO stated that "We generated well over 50% revenue growth from wearables. And I'm thrilled to say that we set Q4 records for wearables in each and every market we track. Our wearables business showed explosive growth and generated more annual revenue than two-thirds of the companies in the Fortune 500."

While Apple doesn't breakout sales data for each wearable in this category, it's clear by today's report that AirPods is the clear leader.