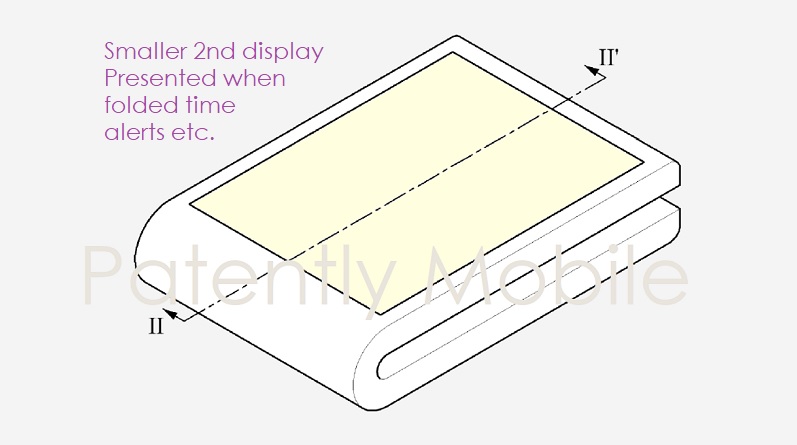 In mid-November Patently Apple posted a report titled "Motorola's Foldable Razr Smartphone will Ship in January 2020 beating Samsung's first Flip Phone model to Market." On the same day that we posted the report, the U.S. Patent Office published a patent application from Samsung covering yet another flip phone smartphone design that's closer to Motorola's with a small secondary display that's seen when the phone is shut in the folded position, as our cover graphic illustrates.

Although the real battle in the foldable flip phone category is likely to be between Motorola and Samsung, Apple has at least two such iPhone designs on record should the need arise sometime in the future.

Our reports covering Apple's flip phone patents could be viewed here (2016) and here (2019).  The patent figure below is from our 2016 patent report. 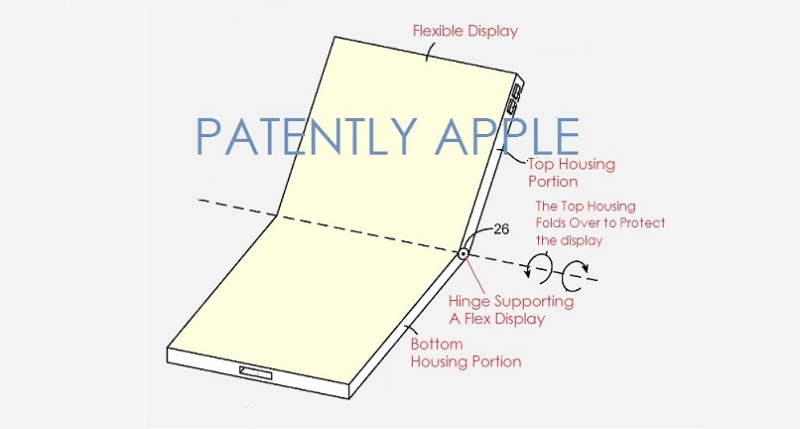 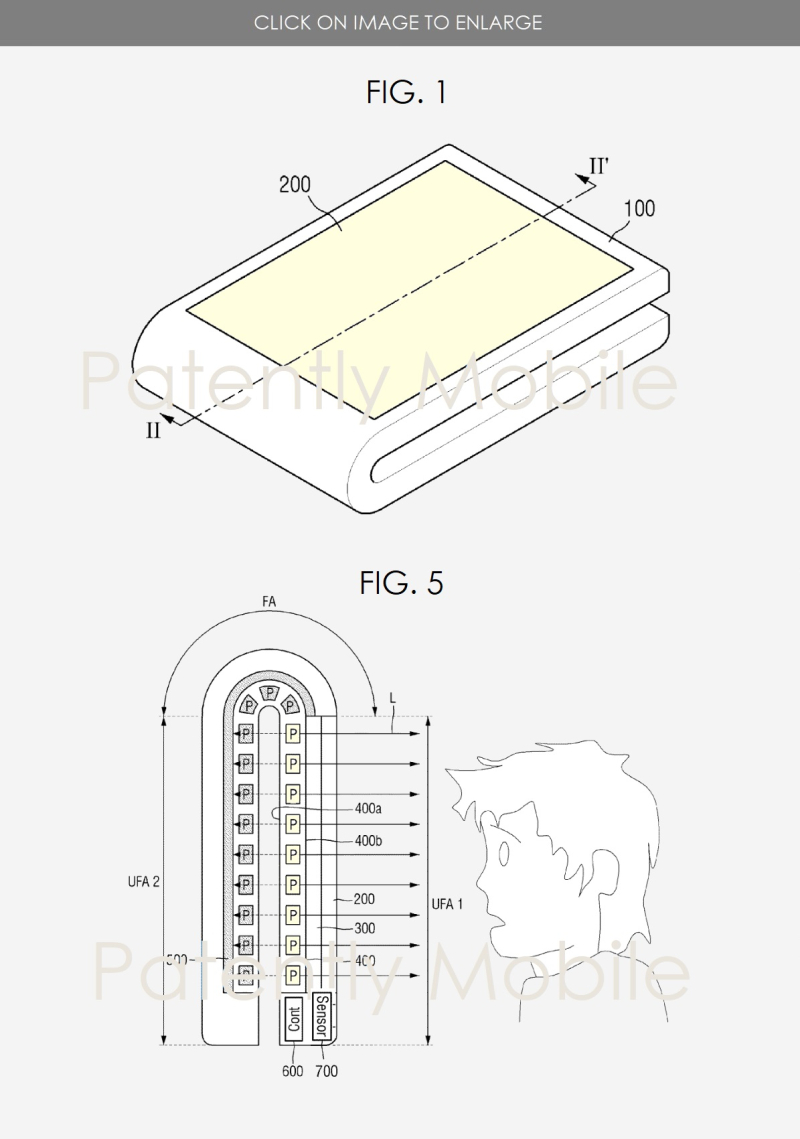 Samsung's patent FIG. 6 below illustrates the operation of the foldable display device in the unfolding mode. 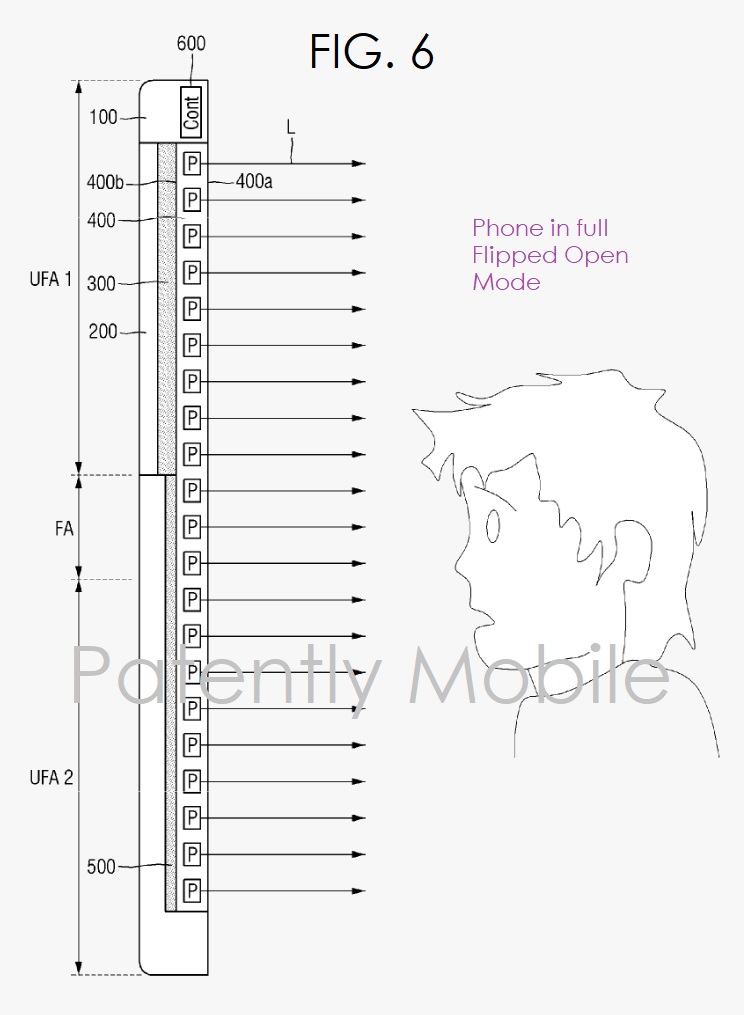 Prior to November's patent filing, Patently Mobile covered at least six more flip phone styled smartphone patents between 2016 and 2019 that you could review here: 01, 02, 03, 04, 05 and 06.  The last design in the group shows a unit with the ability to fold in different ways depending if the user wants to place emphasis on the camera or the speaker at any given time as presented below from our August 2019 report. 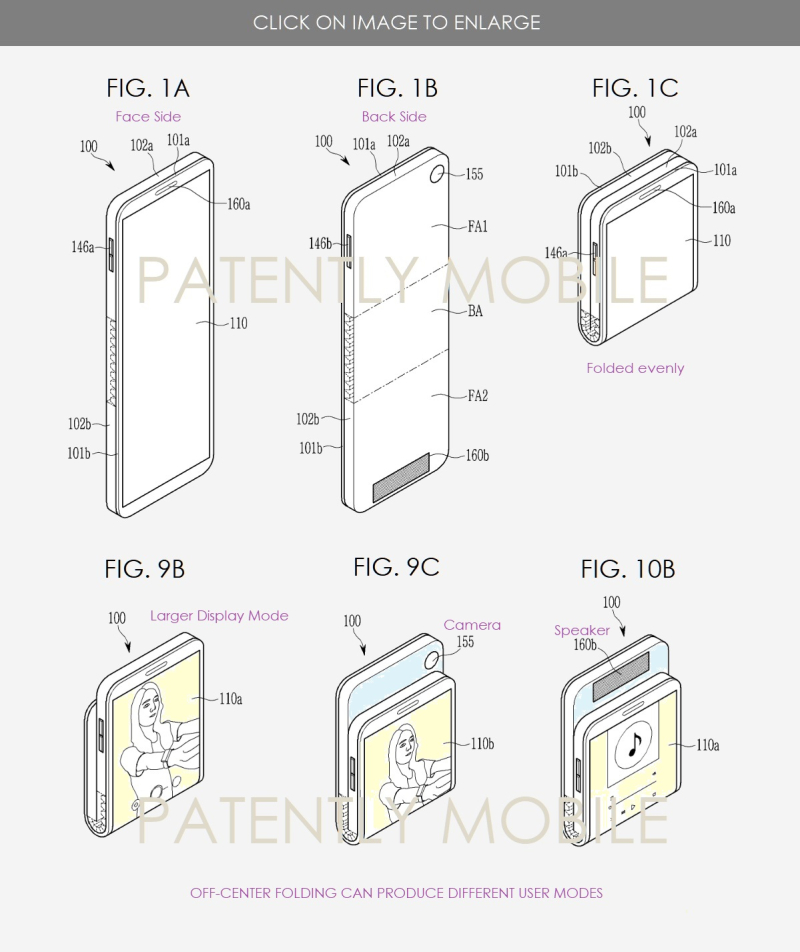 In patent FIG. 9B above, the upper area of the foldable smartphone may be folded to be larger than the lower area; In FIG. 9C, the lower portion of the smartphone is bent backwards in an off center configuration so that the camera is able to act as a selfie camera; Folding it another way, as shown in FIG. 10B above, the speaker can be highlighted when using a music app.

At the end of the day, a future flip phone from Samsung could be any one of their patent-pending designs or a combination of ideas melded into one final product. However, knowing that Motorola's Razr will have a secondary from display when folded, this latest Samsung patent shows that they may decide to match Motorola's idea in 2020 or in a follow-up design in 2021.

Samsung's latest US patent application published by the U.S. Patent Office in mid-November was filed in March 2019. Its Korean patent was originally filed in May 2018. The inventors are Hwan Jin Kim and Sang Gu Kim.

Samsung's patent focused on the materials of the smartphone and didn't share anything about new phone "features" or software that could be accompanied by the flip phone as other flip phone patents have done in the past.