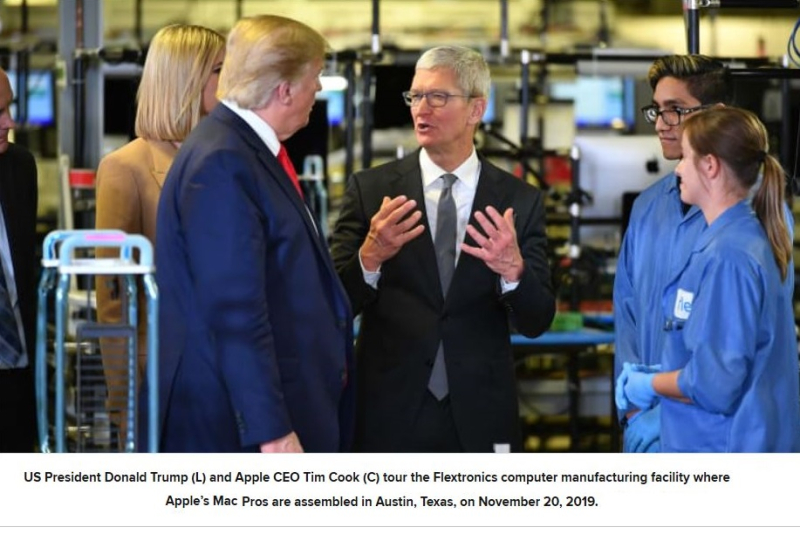 A surprising new survey has revealed that Apple employees are strongly in favor of CEO Tim Cook's efforts to lobby President Donald Trump on behalf of the company, seemingly putting it at odds with its Silicon Valley brethren.

The survey, conducted for Fortune by anonymous workplace social network Blind, shows that 81.6 percent of the tech giant's employees support Cook in his efforts to speak directly with Trump on issues that affect the company and help "shape policy in Apple's favor."

Separately, 8 out of 10 respondents said that it is "fair that some of Apple's products have been exempted from U.S. tariffs on Chinese-made goods." Cook has repeatedly lobbied the Trump administration to exempt Apple's products, including the iPhone, Apple Watch and Macs, from tariffs.

Blind confirms the respondents are Apple employees based on their corporate Apple email addresses. Employees are intentionally anonymous on the service, but Blind says that more than 50% of Apple employees on the social network self-identify as engineers.

It just goes to show you that there's a dedicated group within Apple with poisonous bias against President Trump. It's rather insane considering that it's Elizabeth Warren and Bernie Sanders that want to break Apple up if elected.  For more on this, read the full Fortune report.

At times surveys have baffled me in how they extract a conclusion from an amazingly small pool of people. The findings in this particular survey are reportedly based on 100 Apple employees. Apple has 90,000 Apple employees in 50 states. Knowing that the animosity against President Trump is extremely high at Apple (and Silicon Valley in general), I certainly have my doubts about Blind's findings being representative of the whole of Apple.

Am I the only one that holds this view? Let me know in the comments below.