Home Archives Contact Us Subscribe Twitter MeWe Facebook Patently Mobile
Apple led the way with Major Health Studies Associated with Apple Watch, now Fitbit forms an Alliance with Bristol-Myers Squibb & Pfizer
Apple's CEO has been named the new Chairman of the Advisory Board of the School of Economics in Beijing, China 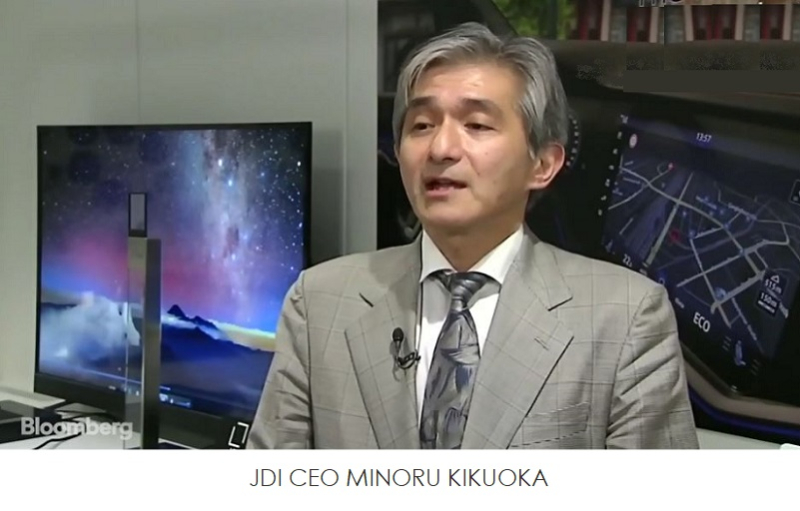 Last month Patently Apple posted a report titled "Funding for Japan Display's OLED Plant has been approved to make Displays that will meet Apple's Demanding Quality." The report noted that Japan Display is planning to make OLED displays in their Ishikawa plant in the next 2 or 3 years, or sooner. Japan Display sees fast production of OLED panels as the pillar of its growth strategy.

Below is a new Bloomberg Business video interview with the CEO of Japan Display talking about their strategy going forward. In the video interview, the CEO claims that they're ready for mass production of some OLED products and that they have unique under display sensing technology. Apple has shown great interest in under display biometrics, with one of their patents on this surfacing earlier this month.

Japan Display Inc. is now saying that it has about a year before it needs to decide on whether to take a plunge on next-generation organic light-emitting diode displays.

While OLED panels are slimmer, more energy-efficient and offer higher contrast, JDI’s liquid crystal displays will retain a price advantage that keeps them competitive in smartphones through 2021, the company’s new Chief Executive Officer Minoru Kikuoka said in an interview. He anticipates a more decisive shift to the new technology may occur in that time period, declining to elaborate on plans of specific customers.

“We are seeing consumers put more emphasis on affordability when it comes to their smartphone preferences,” Kikuoka said. “The industry is now gaining a new appreciation for the kind of price competitiveness offered by the LCDs.”

After repeatedly pushing back mass production of its own OLED screens, JDI is finally close to having its first OLED product, Kikuoka said, declining to give further details other than to say that it won’t be a smartphone screen.

A Bloomberg source familiar with the matter confirmed that JDI’s first OLED will be used in the Apple Watch, as competing in the mobile phone arena would take billions of dollars in additional investment that isn't available to them yet.

Chinese screen makers BOE Technology Group Co. and Tianma Microelectronics Co. had also shown interest in JDI’s OLED technology, but both have since focused on developing their own versions. Having  an actual track record of mass-producing OLED panels might bring those companies back to the table in the future, Kikuoka said. A joint venture at Japan Display’s Hakusan plant in central Japan would be the easiest route, but exporting its manufacturing knowhow to China is also an option, he said.