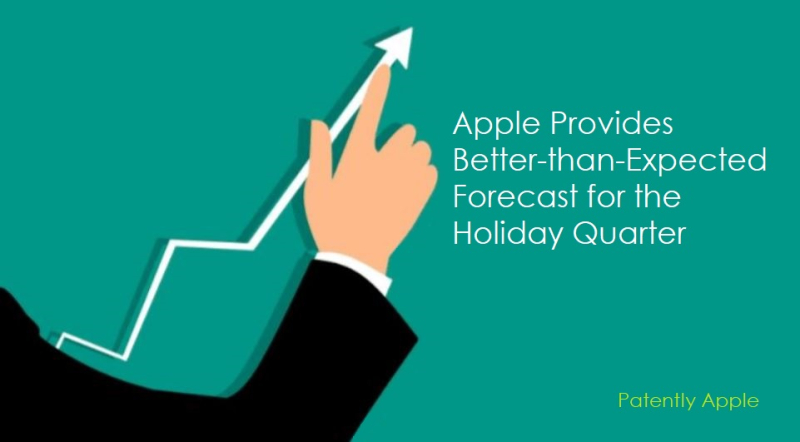 Apple Inc. has projected revenue for the holiday quarter that beat analysts’ estimates, signalling solid demand for the latest iPhones, new services like Apple TV+ and wearables such as upgraded AirPods and Apple Watch. After hours Apple is up $4.4/Share or 1.7%. You could check out Apple's (AAPLs) chart live here which is bound to change over the next the next few hours. Fiscal first-quarter sales will be $85.5 billion to $89.5 billion, the Cupertino, California-based technology giant said in a statement. Analysts were looking for $86.5 billion, according to data compiled by Bloomberg.

The forecast suggests Apple is seeing strong demand for the iPhone 11 and iPhone 11 Pro models that went on sale in September. The company’s shares had surged in recent weeks on optimism about the upgraded devices. Chief Executive Officer Tim Cook told a German newspaper at the end of September that the new models had a “very strong start.”

Shannon Cross of Cross Research: "This was a strong quarter and this should silence some of the concerns out there regarding the iPhone. The guidance was also strong."

Bloomberg further noted that "Analysts had become increasingly bullish on iPhone 11 sales. Apple cut some prices and has offered more attractive trade-in deals. Still, a trade war between the U.S. and China has sparked concern that Chinese consumers may favor domestic smartphones over Apple’s product."

According to a new report earlier today, the US-China trade agreement is positively moving along and the Chinese appear to moving the needle in the right direction when it comes to forcing US companies to transfer their technology to China in order to gain access to that market.

This is a significant step which could be positive going forward and Tim Cook made mention that he feels the tone of the talks are positive and he's optimistic. It's also one of the reasons Apple is so bullish for Fiscal Q1, calendar Q4.

However, at some point in  time, the U.S. may have to move on the issue of Huawei, at least allowing their smartphones into the U.S. market.

Bloomberg also echoed Apple's position on the Wearables, Home, and Accessories segment, which includes the Apple Watch, AirPods, HomePod, Apple TV, and Beats headphones, which generated $6.5 billion in revenue for the quarter, an increase of 54%, easily topping Wall Street estimates.

Apple's Services division is growing at a faster rate as well. This quarter, revenue jumped 18% from a year earlier. In the fiscal third quarter sales rose 13%.

Still, sales fell in several areas outside the U.S. In China, revenue slipped 2% to $11.1 billion. Sales in Japan and Europe also declined.

Apple said it generated $7 billion in revenue from the Mac segment. That was down 5% and missed Wall Street expectations. For more on this story, read the full Bloomberg report.

During Apple's conference Call, Tim Cook noted that while iPhone sales declined 9% in the quarter, the rate of decline has been coming down dramatically since the beginning of the year when declines were in double digits. The impression from Cook was that the declines in iPhone sales will be reduced again this quarter if not erased or better.

Apple's CEO was also very bullish during the conference call on Apple Pay, stating that their growth was outpacing that of competitor PayPal by a wide margin.

Lastly, Apple's CEO announced that Apple Card will soon be adding a new feature for iPhone financing. Starting later this year, Apple Card users will be able to finance iPhone purchases over a two-year period with 0% interest.