Yesterday Patently Apple posted a report titled "Rumor Claims that Apple will Shift to Mini-LED displays for High-end iPad Pro and MacBooks by 2021." Reportedly MacBook displays use 576 LEDs in contrast to a future MacBook display based on mini LED will use approximately 10,000 LEDs. Our report included a chart illustrating that the eventual leap to micro-LEDs will translate to possible millions of LEDs.

While the topic is fresh, the U.S. Patent and Trademark Office officially published a granted patent for Apple Inc. regarding some technicalities involved with future micro-LED technology.

One of the inventors listed on this granted patent is Dmitry Sizov, a Senior Hardware Engineer. His background includes over 8 years with Corning as a Senior Research Scientist where he worked on the design of GaN-based light emitting devices which is a part of today's granted patent.

Apple's patent notes: "For example the layers forming the LED may include GaN, AlGaN, InGaN. In an embodiment, the top region includes n-GaN, and the bottom region includes p-GaN. The active region may be formed of a variety of materials, such as but not limited to InGaN."

Unless you're a scientist or high-end display engineer, Apple's example just sailed over your head.

For us mere mortals, Apple notes that "State of the art displays for phones, tablets, computers, and televisions utilize glass substrates with thin film transistor (TFTs) to control transmission of backlight though pixels based on liquid crystals. More recently emissive displays such as those based on organic light emitting diodes (OLEDs) have been introduced as being more power efficient, and allowing each pixel to be turned off completely when displaying black.

Considering that Apple's granted patent is titled "Micro LED mixing cup," we present FIG. 1 below which is a schematic cross-sectional side view illustration of light emitting structure including a plurality of mixing cup regions. 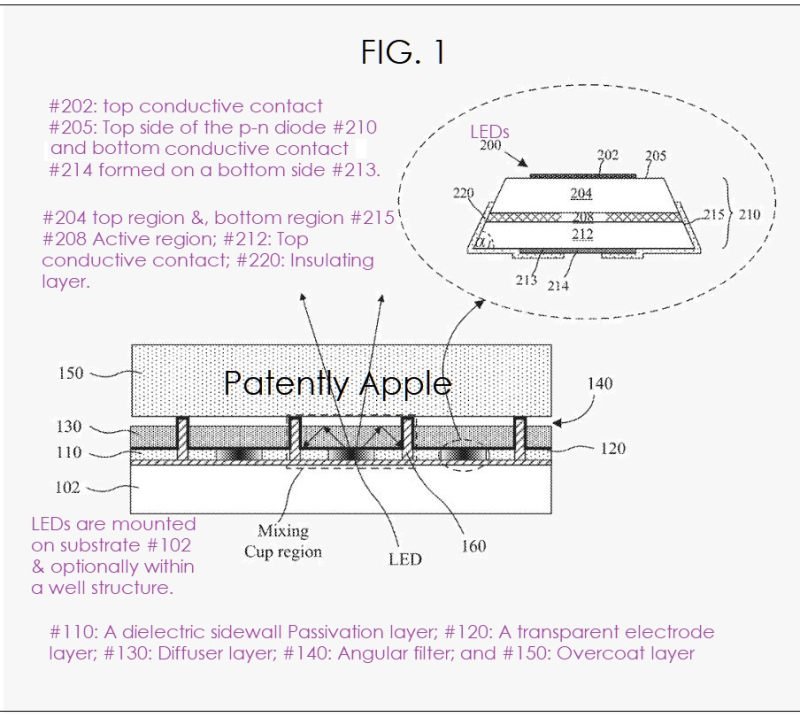 Apple's granted patent 10,431,723 was originally filed in Q4 2017 and published today by the US Patent and Trademark Office.  For engineers, scientists and the over curious, you could check out the fine details of this invention here.

In 2019 Patently Apple posted another three reports on micro-LED displays as follows:

01: Apple Wins a Patent for micro-LED based Displays that could be used in Future iMacs, MacBooks iDevices and a TV

03: A micro-LED Display Patent was Published in Europe this Month that could Apply to Future iDevices, Macs & More

At present, only Samsung has produced a display with micro-LED called "The Wall" that's certainly not aimed at any mass market.