Home Archives Contact Us Subscribe Twitter MeWe Facebook Patently Mobile
A Reminder from Apple: "There's more Private Information on your Phone than in your Home. Think about that"
Apple is Considering Giving Priority to Third-Party Products on their Store Shelves that Promote Sustainability

TSMC is the leading chip maker in the world hands down. While Apple is a huge customer for iDevice processors, their list of customers reads like an all star team. Most of the leading fabless semiconductor companies such as Qualcomm, Nvidia, Advanced Micro Devices (AMD), MediaTek, Marvell and Broadcom Inc. are customers of TSMC along with consumer product companies like Apple, Google, Lenovo, OnePlus, ASUS and others.

Few people know that the Pentagon is another TSMC customer. A New York Times report published late this afternoon notes that Pentagon officials have been holding private discussions with tech industry executives to wrestle with a key question: how to ensure future supplies of the advanced computer chips needed to retain America’s military edge.

The talks, some of which predate the Trump administration, recently took on an increased urgency, according to people who were involved or briefed on the discussions. Pentagon officials encouraged chip executives to consider new production lines for semiconductors in the United States, said the people, who declined to be identified because the talks were confidential.

The discussions are being driven by the Pentagon’s increased dependence on chips made abroad, especially in Taiwan, as well as recent tensions with China, these people said.

One chip maker, the Taiwan Semiconductor Manufacturing Company, better known as TSMC, plays a particularly crucial role producing commercial chips that also have applications for aircraft, satellites, drones and wireless communications. And because of unrest over the past few months in the semiautonomous Chinese territory of Hong Kong, some Pentagon officials and chip executives have wondered about situations that could force suppliers in Taiwan to limit or cut off silicon shipments, the people said. 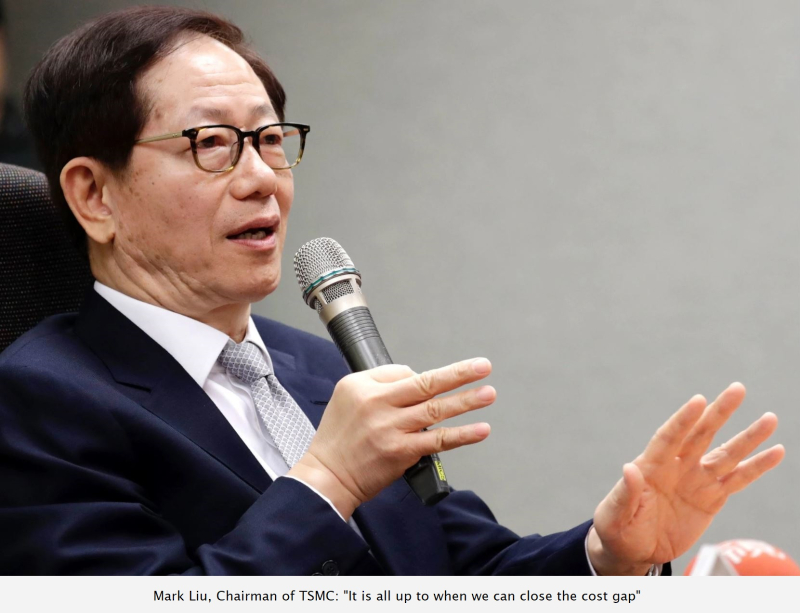 Mark Liu, the chairman of TSMC, said he had recently discussed options for a new factory in the United States with the Commerce Department. The stumbling block was money; major subsidies would be required, he said, as it is more expensive to operate in America than Taiwan. In an interview Liu stated that "It is all up to when we can close the cost gap."

The conversations are a sign of how federal agencies are grappling with a deep-rooted technology conundrum. The United States has long fielded the most advanced weaponry by exploiting electronic components once exclusively produced in the country. Chips help tanks, aircraft, rockets and ships navigate, communicate with one another and engage enemy targets.

But domestic production lines of many chips have long since moved overseas, raising questions about supply interruptions in the event of political or military crises abroad. Those fears have been exacerbated by the increasing importance of particular components — such as programmable chips that figure prominently in the F-35 fighter jet, which are designed by the Silicon Valley company Xilinx and mainly fabricated in Taiwan.

The United States remains the leading supplier and innovator in most chip technologies, including the processors that Intel sells for nearly all personal computers and server systems. But the Pentagon’s research arm — DARPA, for the Defense Advanced Research Projects Agency — has been trying since 2017 to spur chip innovations under a $1.5 billion Electronics Resurgence Initiative.

Its goals include finding alternatives to silicon for manufacturing and packaging small "chiplets" together instead of making big monolithic chips.

“We have vulnerabilities we really need to address, but we are still the dominant producer of electronics in the world,” said Mark Rosker, the director of DARPA’s microsystems technology office. He said questions about the American semiconductor industry called for "a graceful and considered kind of panic."

If there's to be a new TSMC plant it will be in the Camas, Washington area where they currently have a small plant. But it'll all come down to heavy subsidies and that kind of decision may have to wait until after the 2020 election to get resolved. Read The New York Times report for the full story.