Home Archives Contact Us Subscribe Twitter MeWe Facebook Patently Mobile
Under Extreme Pressure Apple Reverses Course and Pulls both ‘HKmap.live’ and Quartz App from their Chinese App Store
Apple Patent Reveals Finger Sensory Devices that will Work with a Future Headset and Designed to be Stored Together 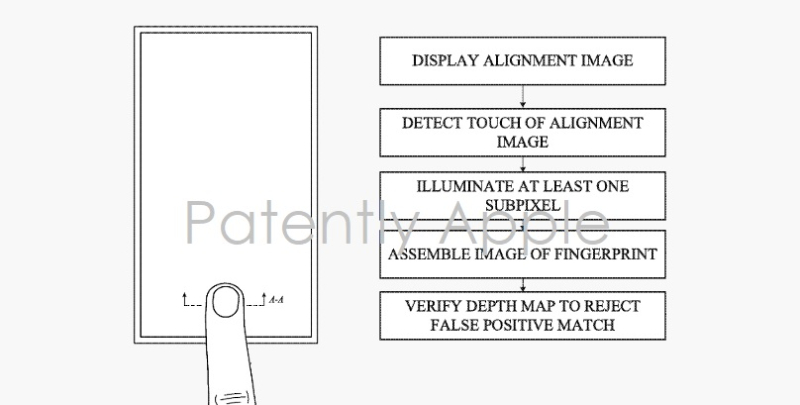 Today the US Patent & Trademark Office published Apple’s fourth next-gen Touch ID patent application for 2019 that involves the user simply touching the display to have their fingerprint captured for authentication. The patent states that the finger could be statically positioned to work or even in action like sliding a finger across the sensor area.

In many embodiments, an optical imaging array is positioned behind a display and is oriented to receive light transmitted through the display in a direction generally opposite that of light emitted from the display.

The optical imaging array can be used by the electronic device for any suitable imaging, sensing, or data aggregation purpose including, but not limited to: ambient light sensing; proximity sensing; depth sensing; receiving structured light; optical communication; proximity sensing; biometric imaging (e.g., fingerprint imaging, iris imaging, facial recognition, and so on); and the like. 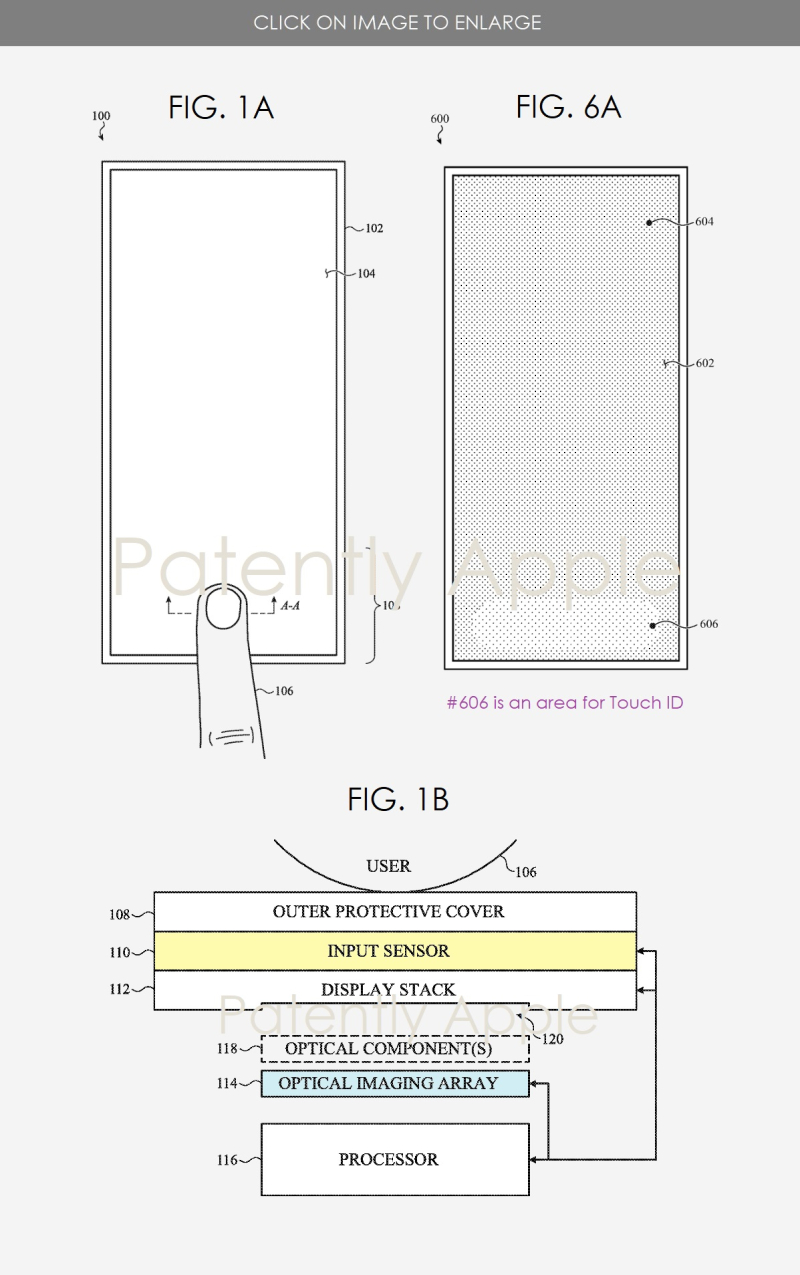 In another example, the user's fingerprint can be imaged when the user places his or her finger onto the low pixel density region.

In some cases, the active display area #602 can display an image or animation that encourages the user to touch a particular part of the low pixel density region #606 in order that the user's fingerprint can be captured.

For example, in some embodiments, the active display area can display a shape within the low pixel density region #606. The shape may be animated in a manner that draws the user's attention. For example, the shape can pulse, rotate in three dimensions, flash one or more colors, vibrate, and so on. In other cases, other shapes, patterns, or animations are possible.

In some examples, the electronic device #600 can generate one or more supplemental outputs in addition to, or in place of the operation of displaying an image or an animation described above. Supplemental outputs can include, but may not be limited to: playing a sound from a speaker; generating a haptic output with a vibrating element; generating a haptic tap or set of haptic pulses with a linear actuator; vibrating the display or housing; increasing or decreasing perceivable friction of the display (e.g., electrostatic attraction or ultrasonic vibration); and so on or any combination thereof. 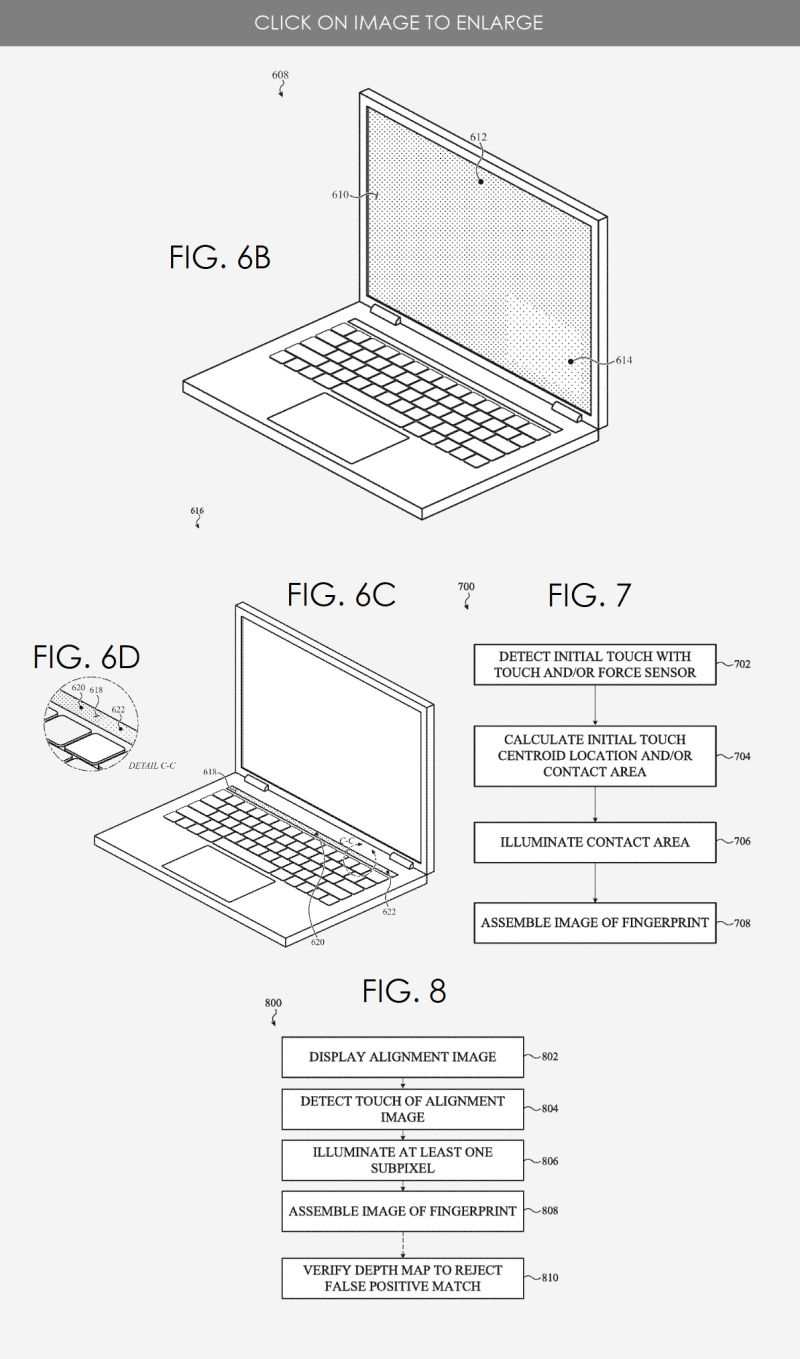 Apple's patent application that was published today by the U.S. Patent Office was filed back in Q2 2018. Considering that this is a patent application, the timing of such a product to market is unknown at this time.

The other three patents published this year about Touch ID under the display include the following:

01: Next-Gen Under-the-Display Touch ID could use an Array of Pin Hole Cameras to Capture Biometric Data

03: Apple's Next-Gen Touch ID uses Optical Imaging Sensors under a Display for a Variety of Devices like Apple Watch