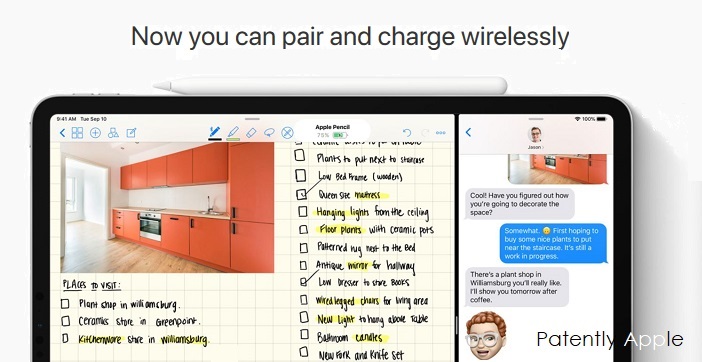 Today the US Patent & Trademark Office published a patent application from Apple that relates to wireless systems, and, more particularly, to systems in which devices are wirelessly charged. Once the patent application was reviewed, it was evident that part of Apple's invention was in-part already in use with their new Apple Pencil's wireless charging system which Apple illustrating that it may possibly extend to the iPad Pro, iPhone and beyond. 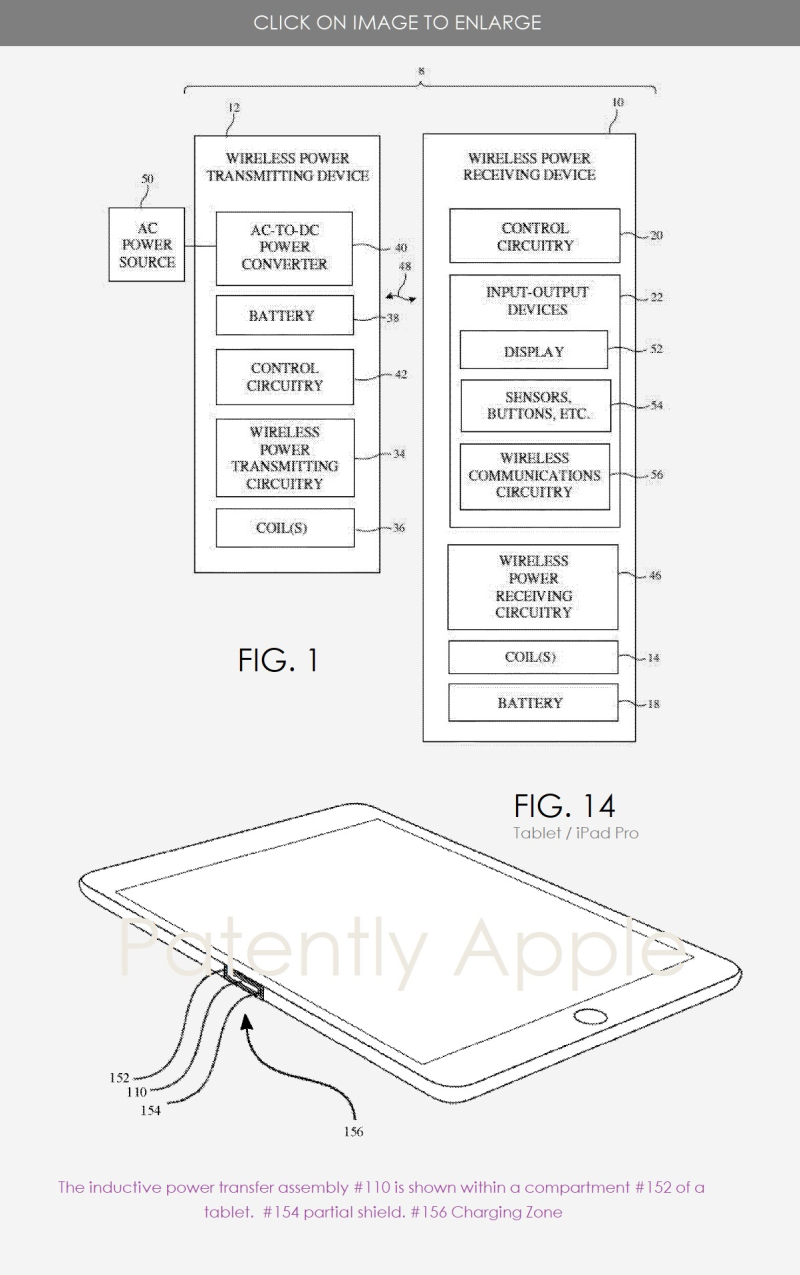 The partial shield or plating #154 can act as a magnetic shield to reduce the amount of flux generated by the transfer assembly 110 reaching electronic components of the tablet computer #150.

The tablet computer can include magnets or other coupling means for retaining a wireless power receiving device placed at or near the charging zone #156. For example, magnets could be provided as part of the transfer assembly within the compartment #152, or in the region around the compartment.

Apple's patent FIG. 11 below is the image Apple claims is the heart of the patent. It's a top view of an illustrative inductive power receiving device showing the core, limbs and coils. 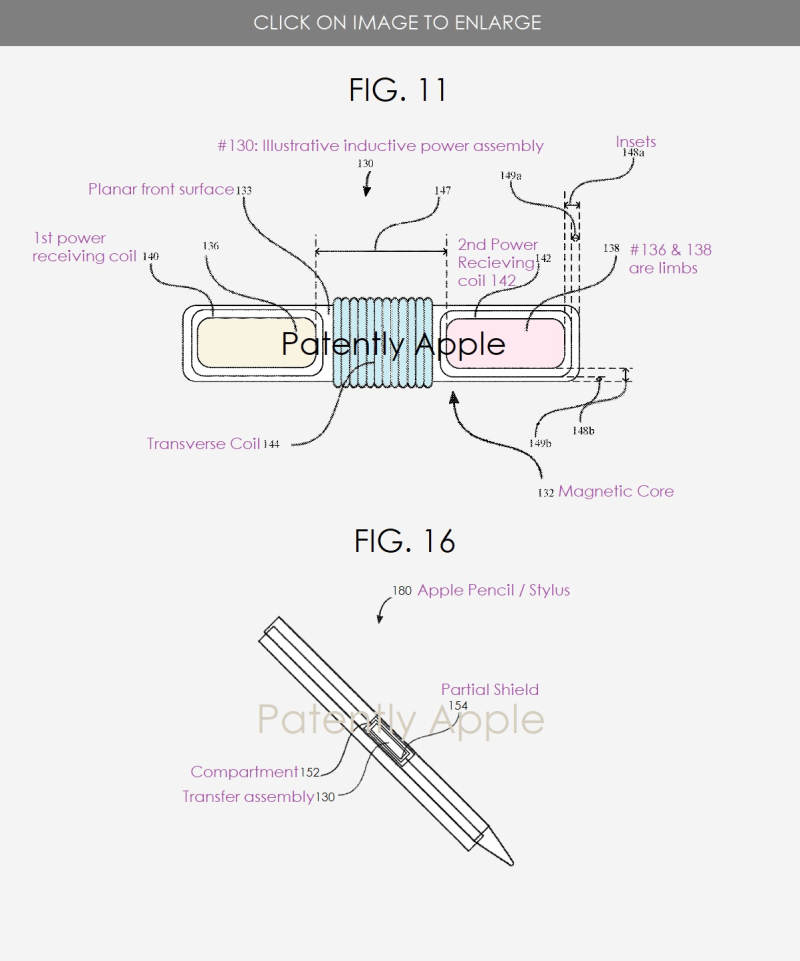 Apple's patent FIG. 16 above is a schematic diagram of an illustrative electronic accessory including an inductive power receiving device. Apple's latest Apple Pencil for the iPad Pro as pictured below. 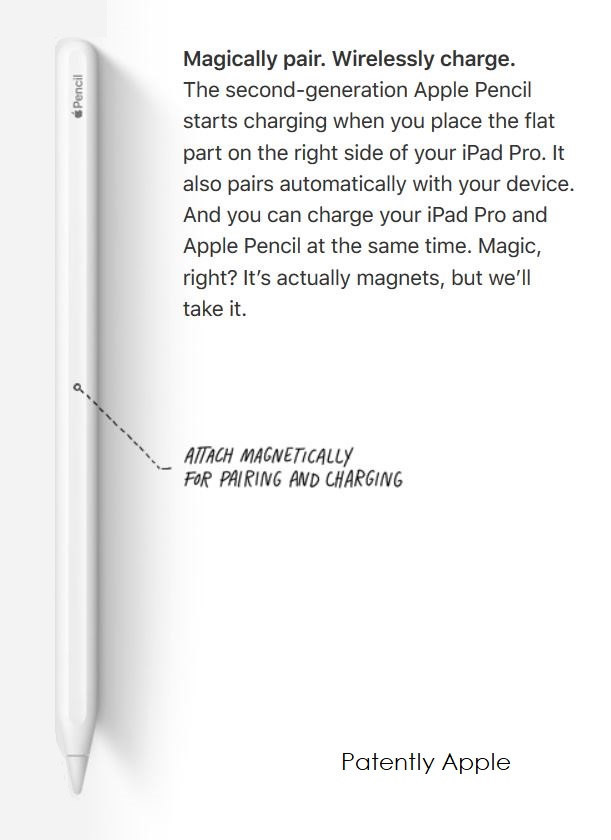 Although the device images for the iPad and Apple pencil appear to be pointing to a port, they are not. Just like with Apple's new magnetic version of Apple Pencil, the wireless receiving power system is within and edge of the device.

As far as the Apple Pencil is concerned, this is now a patent fulfilled.

As with most patents, Apple doesn't want to limit the devices to only those that are illustrated in the patent. Apple notes that the wireless power receiving device is a device such as a cellular telephone, watch, media player, pair of earbuds (AirPods), remote control, laptop computer, electronic pencil or stylus, other portable electronic device, or other wireless power receiving equipment.

In the end, this is an alternative wireless charging system to the ones already in use with the iPhone and Apple Watch. Whether this particular wireless system discovered in Apple's latest patent published on Thursday will extend to other Apple devices in the future is unknown at this time.

Apple's patent application 20190311848 that was published on Thursday by the U.S. Patent Office was filed back in Q3 2018. You could review the details here. Considering that this is a patent application, the timing of such a product to market is unknown at this time.

Both inventors came from Apple's acquisition of Power by Proxi. One of the engineers listed on this patent is Saining Ren, which didn't make the transition to Apple after the acquisition according to his LinkedIn profile.

Posted by Jack Purcher on October 13, 2019 at 07:21 AM in 1A. Patent Applications, Wireless Charging, Wireless technology | Permalink | Comments (0)