On September 11, 2018, Patently Apple posted a report titled "A Federal Appeals Court invalidates Key Claims in an Israeli Patent that was used to Sue both Apple and Samsung." The report noted that a federal appeals court handed a victory to Apple and Samsung Electronics, gutting a patent relating to wireless hotspot technology the smartphone makers had both been accused of infringing.

The U.S. Court of Appeals for the Federal Circuit affirmed a ruling by the Patent Trial and Appeal Board invalidating key claims in a patent owned by IXI Mobile (R&D) Ltd, a New York-based intellectual property licensing company.

Flash forwarding to yesterday afternoon, Apple has filed with the court a "Complaint for Declaratory Judgment of Res Judicata, Noninfringement and Invalidity." Res Judicata is the principle that a cause of action may not be relitigated once it has been judged on the merits.

This kind of lawsuit is filed when a party is threatened with a patent infringement lawsuit. It may preemptively sue the patent owner(s) in a declaratory judgment action and seek to have the patent declared invalid or not infringed.

Early into the complaint, Apple notes: "On information and belief, IXI IP is a patent licensing entity formed in April 2014 that produces no products, and instead exists solely to assert IXI’s patents." The definition is usually assigned to Patent Trolls.

In their "PRAYER FOR RELIEF" Apple respectfully requests the following relief from the Court:

For more details of this case, read Apple's full complaint filed with the court in the full SCRIBD document below, courteous of Patently Apple. 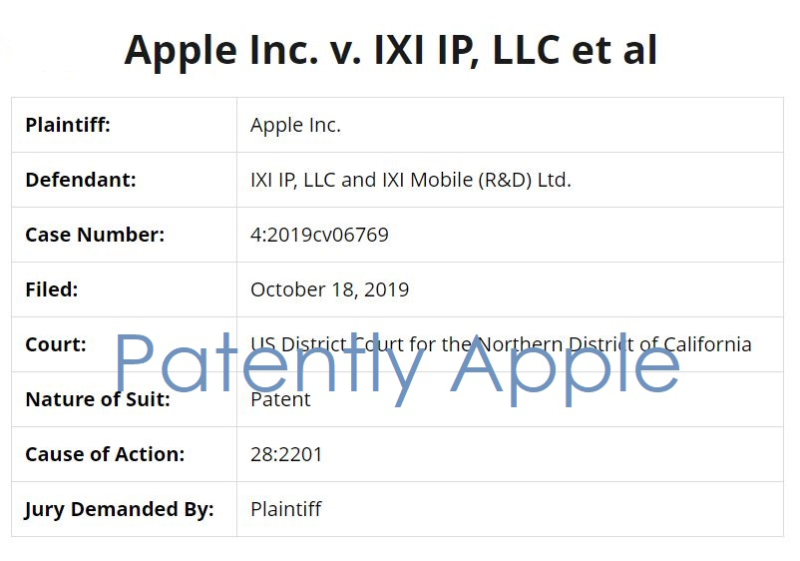