Earlier this month the US Patent & Trademark Office published a patent application from Sony that relates to professional gaming augmented reality (AR) visors and methods for parsing context-specific heads up display (HUD) content from a video stream. Technically the AR visor will work with future PlayStation and Xbox consoles and Apple and Google Operating Systems.

In Sony's patent background that explains what the problem is that their invention is to solve, they note that many video streams, especially those from a video game, contain peripheral supplemental data, information or images on screen. As not to interrupt or block the primary images and content being displayed, this supplemental information is typically displayed on a television or computer screen around the edges or perimeter of the primary video being shown.

However, for example, during the play of a video game, requiring the user to take his eyes off of the primary screen content to view and decipher HUD content along the outskirts of the screen can be distracting. Indeed, while scanning perimeter-located content typically takes only seconds, present principles appreciate that in game play activity even short durations of distraction can result in untimely miscalculations, missed opportunities or other game play mistakes.

Indeed, to ensure they see important but peripheral information, professional video game players train themselves to constantly divert their gaze to the screen edges at opportune periodicities using training metronomes.

Sony's invention generally relates to computer ecosystems including aspects of consumer electronics (CE) device networks such as but not limited to computer game networks.

Content appropriate for Heads-Up-Display (HUD) can be strategically extracted and displayed or superimposed over the primary viewing area through the use of a visor or display worn or positioned in front of the user, relieving the user from diverting their attention to other areas of the screen and creating a gameplay advantage for the user.

Camera: In example embodiments, at least one camera may be presented on the interpose display and positioned to track an eye orientation of the computer gamer, with information from the camera being sent to a game console executing the computer game program for, e.g., establishing a computer game weapon aim line. 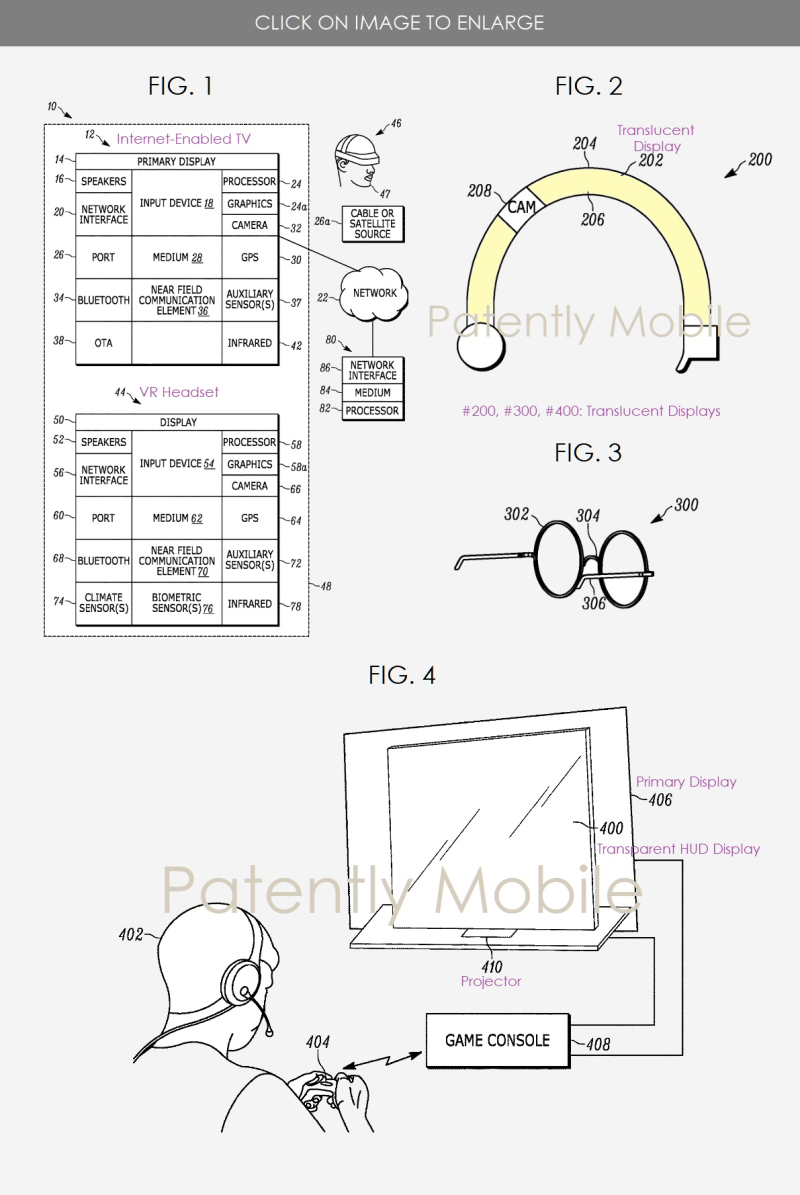 Sony's patent FIG. 4 above is a perspective view of a translucent display configured as a standalone HUD that is not worn by a gamer but rather is disposed between the gamer and primary display, showing some components schematically, it being understood that components in any of the implementations of the HUD may be interchanged.

Sony's patent FIG. 5 below is an elevational view showing a system that includes the primary display on which computer game video from a game console is shown, with information from the program executed by the console being sent to a translucent HUD; FIG. 9 is a flow chart of example logic for executing AR presentation on the HUD. 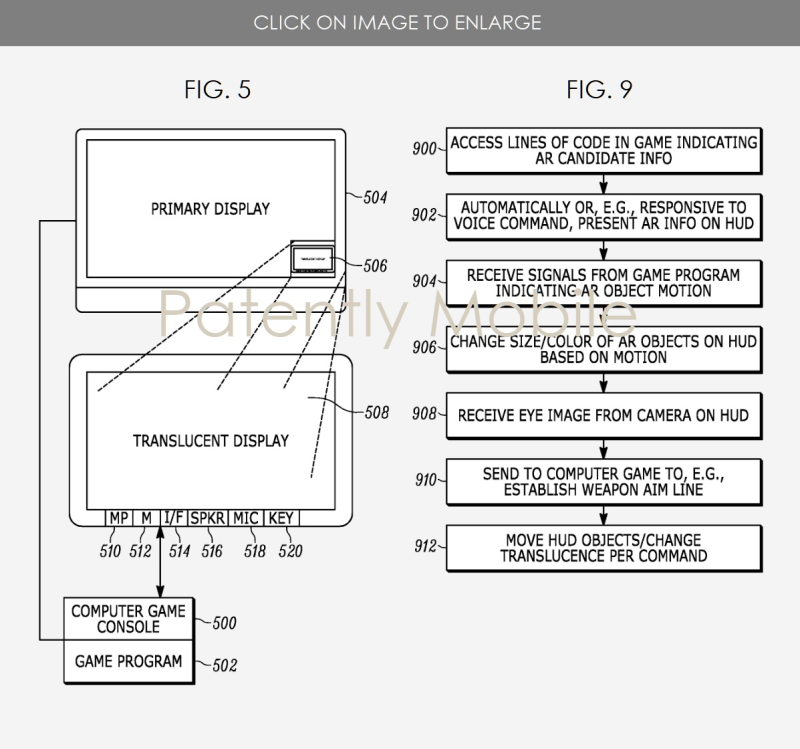 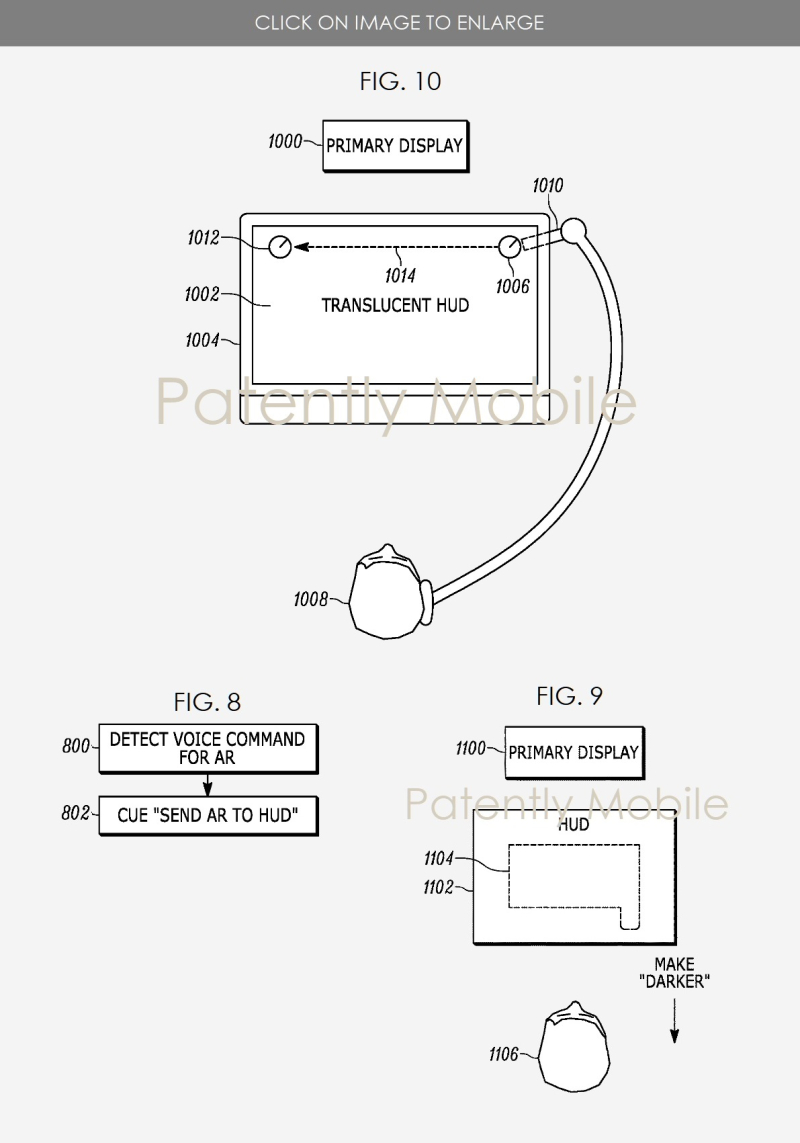 CE devices (gaming console and visor) may include one or more auxiliary sensors (e.g., a motion sensor such as an accelerometer, gyroscope, cyclometer, or a magnetic sensor, an infrared (IR) sensor, an optical sensor, a speed and/or cadence sensor, a gesture sensor (e.g. for sensing gesture command), etc.) providing input to the CE device processor.

The first CE device may include still other sensors such as e.g. one or more climate sensors (e.g. barometers, humidity sensors, wind sensors, light sensors, temperature sensors, etc.) and/or one or more biometric sensors providing input to the CE device processor.

In addition it is noted that in some embodiments the first CE device may also include an infrared (IR) transmitter and/or IR receiver and/or IR transceiver such as an IR data association (IRDA) device.

In some embodiments the server may be an Internet server or an entire server "farm" and may include and perform "cloud" functions such that the devices of the system may access a "cloud" environment via the server in example embodiments for, e.g., network gaming applications. Or, the server may be implemented by one or more game consoles or other computers in the same room as the other devices.

Beyond AR Gaming, Sony states that the invention could also apple to future Vehicle Dashboard Displays. Sony notes that present principles may also be used in applications other than competitive video game play. For example, dashboard displays of information, which otherwise divert the driver's attention from the road and operation of the vehicle, can be moved by a display apparatus that superimposes or otherwise displays the information from the dashboard to a safer HUD field of view.

Sony's patent application that was published earlier this month by the U.S. Patent Office was originally filed back in Q1 2018. Considering that this is a patent application, the timing of such a product to market is unknown at this time.