A rumor by Ming-Chi Kuo, an analyst at TF International Securities, predicts that Apple will use a new mini-LED display for at least one iPad Pro model along with MacBook models in the 2020-2021 time frame.

Apple acquired LuxVue in 2014 known for their work in micro-LED. Since that time, Apple has filed a few patents discussing the use of micro-LED. One was for a foldable device while others are in context with Quantum Dot inventions (01, 02, 03, 04, 05, 06, 07 and 08). One of Apple's latest patents discovered in Europe by Patently Apple claimed that Apple Watch would be adopting micro-LED.

Mini-Led displays are a stepping stone to the superior micro-LED that is on based next-gen technology. The problem with micro-LED at the moment is it's inability to be mass produced. Mini-LED can be mass produced and it's why Apple is moving towards the use of mini-LED displays from LG first for the high-end iPad Pro and MacBooks.

You could learn more about the differences between mini and micro LED from a 2018 LEDinside report here. Below is a quick overview of the technical difference between the two types of displays. 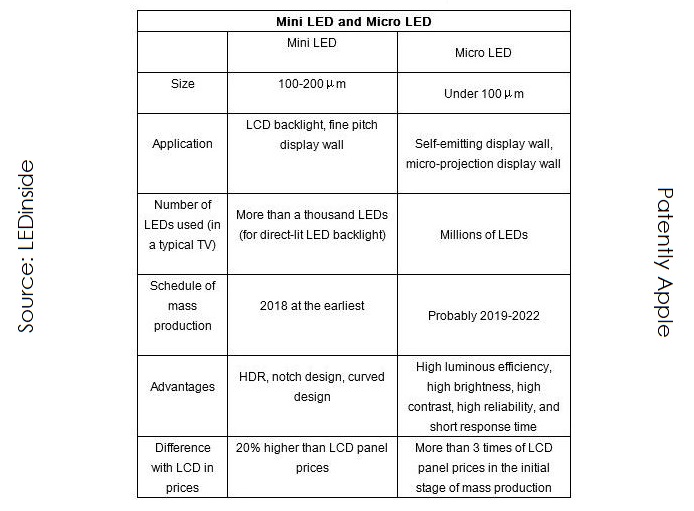 Kuo added that the iPad Pro and MacBook displays will each use approximately 10,000 LEDs compared to 576 in Apple's upcoming Pro Display XDR.

Kuo believes the Mini-LED displays will allow for thinner and lighter product designs, while also offering good wide color gamut performance, high contrast and HDR, and local dimming, which dims the backlight behind areas of the screen that are displaying black while keeping the bright parts of the screen bright. The rumor was first published by MacRumors late last night.