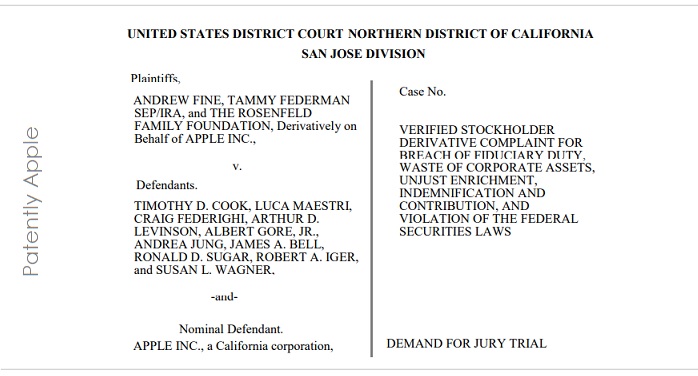 Sept. 22, 2019 Report Update: A second shareholder lawsuit was filed on this same matter

Three Apple stockholders have filed an eight count lawsuit against key Apple executives and Board members. The complaint states that "This derivative action brought for the benefit of Apple seeks to recover the Company’s damages, as described herein, from the directors and officers whose breaches of fiduciary duties and other legal violations caused those damages." In part, the focus is on the mishandling of the iPhone throttling situation causing a series of class actions against Apple. Apple is listed in the lawsuit as a "Nominal Defendant." Find the legal definition of Nominal Defendant in context with a shareholder lawsuit here.

The full preliminary statement from the lawsuit states in full:

"Apple’s flagship product is its iPhone, accounting for nearly two-thirds of the Company’s revenues in 2017 and 2018. Much of the revenues derived by Apple from the iPhone stem from users upgrading their older model to a new one. Apple periodically provides information to the public reflecting demand for and sales of the iPhone due to its materiality to the Company’s financial condition and business prospects.

Given the importance of the iPhone to the Company, Apple’s directors and officers were required to investigate and take action regarding reports from frustrated consumers of Apple products that they had experienced unexplained shutdowns with their Apple devices even though the batteries were sufficiently charged.

In November 2016, Apple admitted there was a problem, but claimed that it was limited to the iPhone 6s manufactured in September and October 2015. In fact, the problem stemmed from the degrading of the lithium-ion batteries that power iPhones. Thus, installing a new battery would have solved the issue. Rather than be up front with its customers and warn them both about the problem and the easy solution therefor, Apple disseminated an update to its operating system, “iOS,” that purported to “fix” the shutdown issue, but did so by “throttling” the iPhone, i.e., dramatically slowing the performance of older iPhone models, without informing the user of that slowdown or securing his or her consent. As such, the update didn’t fix the shutdown issue; it simply reduced the speed of the processor so that it could continue to be powered by the degraded lithium ion battery.

On December 20, 2017, in the face of the independent reports and growing outrage from customers, Apple admitted that the iOS update circulated by the Company intentionally slowed the performance of older iPhones. In an attempt to ameliorate customers’ anger, Apple offered a discounted replacement battery to customers.

Class action lawsuits were swiftly filed both here and abroad against the Company after the revelation of the secret throttling of iPhones was made. Numerous of these class action lawsuits have been consolidated under the caption In re: Apple Inc. Device Performance Litigation, No. 5:18-md-02827-EJD (N.D. Cal.) (the “Consumer Class Action”), which seeks damages on behalf of those consumers (including punitive damages), and an injunction, as well as restitution. The motion to dismiss in that litigation was denied, in part, and granted, in part, leaving Apple to fight four state and federal claims brought on behalf of the putative class.

Class actions were also filed in California state courts that were consolidated under the caption Apple OS Cases, JCCP No. 4976 (the “OS Cases”), asserting claims under California law and based on facts in common with the Consumer Class Action. The court denied Apple’s demurrer to two of the claims pled in the OS Cases, while allowing the plaintiffs there to re-plead those claims for which the demurrer was sustained.

Regulators and governmental authorities have also taken action with regard to Apple’s misconduct, launching investigations that pose further material harm to the Company. The United States Department of Justice (the “DOJ”) and the SEC commenced investigations into Apple’s disclosures concerning the software updates. Regulators and governmental authorities in Canada, Israel, Italy, China, South Korea, France, Brazil, and Spain have likewise investigated Apple. In fact, Italian regulators have already assessed a five million euro fine against the Company, the maximum fine allowable, for its “dishonest commercial practices,” and an additional five million euro fine for failing to give customers clear information about essential characteristics of their batteries, including their average life expectancy and how to maintain or replace them.

The full extent of the misconduct had not yet become clear until January 2, 2019 when declining iPhone sales were disclosed. Tim Cook (“Cook”), Apple’s Chief Executive Officer (“CEO”), informed investors in a press release that the revenue guidance provided merely eight (8) weeks earlier would not be met as a result of lower iPhone sales. Defendant Cook attributed the shortfall to users’ decisions not to upgrade, or to delay upgrading, their iPhones after getting the discount battery replacement, as well as macroeconomic issues in China despite the Individual Defendants’ having repeatedly disclaimed those issues as having an effect on iPhone demand in calls with analysts. After Apple revealed the truth regarding demand for iPhones, the Company’s stock spiraled downward by almost 10%, costing over $74 billion in market capitalization in a single day.

Securities class action lawsuits were swiftly filed against Apple, Cook and Luca Maestri, Apple’s Senior Vice President and Chief Financial Officer, for violations of the federal securities laws. The Company is now besieged with litigation, and investigations as a result of the Individual Defendants’ misconduct. Apple will be forced to expend substantial sums to defend itself in these lawsuits and investigations and stands to incur further material costs if it resolves those lawsuits whether by settlement, or after trial. The Company has also been financially damaged by the securities laws violations. Apple is named as a defendant in the securities class action lawsuit, leading to substantial expenses to defend itself and further damages if the action is resolved unfavorably to the Company. Further, during the period that Apple stock is alleged to have been artificially inflated in the securities class action, the Individual Defendants caused Apple to repurchase substantial quantities of its stock at prices artificially inflated by the false and misleading statements and omissions made by them to the detriment of the Company and its stockholders.

Through this action, Plaintiffs seek to recover from the Individual Defendants, for the benefit of Apple, the damages inflicted upon the Company through their breaches of fiduciary duty and securities laws violations. Plaintiff has made no demand upon the Company’s Board of Directors since it would be a futile, wasteful and useless act due to the lack of independence and disinterest of the Board members and their substantial likelihood of liability for the misconduct described herein."

There's one section in this filing titled "CONSPIRACY, AIDING AND ABETTING, AND CONCERTED ACTION," wherein it states in-part: "In committing the wrongful acts alleged herein, the Individual Defendants have pursued, or joined in the pursuit of, a common course of conduct, and have acted in concert with and conspired with one another in furtherance of their common plan or design. In addition to the wrongful conduct herein alleged as giving rise to primary liability, the Individual Defendants further aided and abetted and/or assisted each other in breaching their respective duties."

Count 7: Violations of Section 10(b) of the Exchange Act

Count 8: Violations of Section 20(A) of the Exchange Act

For more details on this lawsuit, read the full SCRIBD document below covering the entire Complaint filed with District Court of San Jose California, courtesy of Patently Apple. 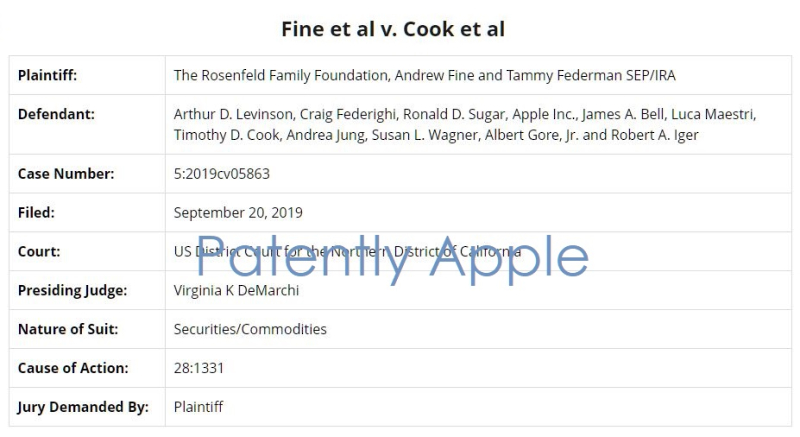 A second Shareholder's Derivative Complaint was filed in Northern California against Apple with basic information presented below. 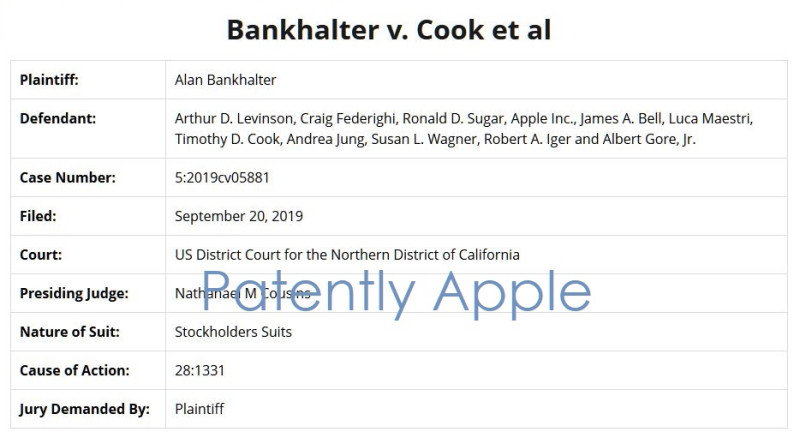