On July 29, Patently Apple posted a report titled "Google to Introduce Pixel 4 Smartphones in Q4 with Apple-Like 3D Face ID and In-Air Gesturing," and provided the video supporting it. Our Patently Mobile site reported on a major Google patent covering in-air gesturing back in March. CNN Business reports today that the Pixel smartphone cameras will be a big focus as well as the all-new hands-free, in-air gesture, feature powered by new motion sensors.

As our cover graphic confirms, Google has invited the media to a hardware event on October 15th in New York City. The invite says “Come see a few new things Made by Google.” The Android world is expecting  to see the new Pixel 4, Pixel 4 XL, a Pixelbook 2 and an updated to Google Home speakers.

A few surprises are bound to arise during the event and Google's aggressive smartphone pricing is bound to help them gain ground. Since Huawei is locked out of the U.S. market, Google is trying to fill that price void and should begin to gain some traction with their new smartphone line-up against Samsung and LG.

The backside of the Pixel 4 has been rumored to mirror Apple's block-style camera design but only have two cameras instead of Apple's triple cameras. A telephoto lens capable of zooming in on subjects will be added.

Apple introduced "Night Mode" for the iPhone 11 Pro and Google's Pixel 4 will introduce an "improved" version of their "Night Sight" mode that they introduced last year.

In March Patently Apple posted a report about Huawei's P30 smartphones and we illustrated that Huawei mocked both the iPhone XS Max and Samsung's Galaxy S10 Plus for having poor to non-existent low light camera capture as presented below. Apple ensured to counter Huawei camera quality. Google's Pixel 4 is likely to also show a huge leap in this area. 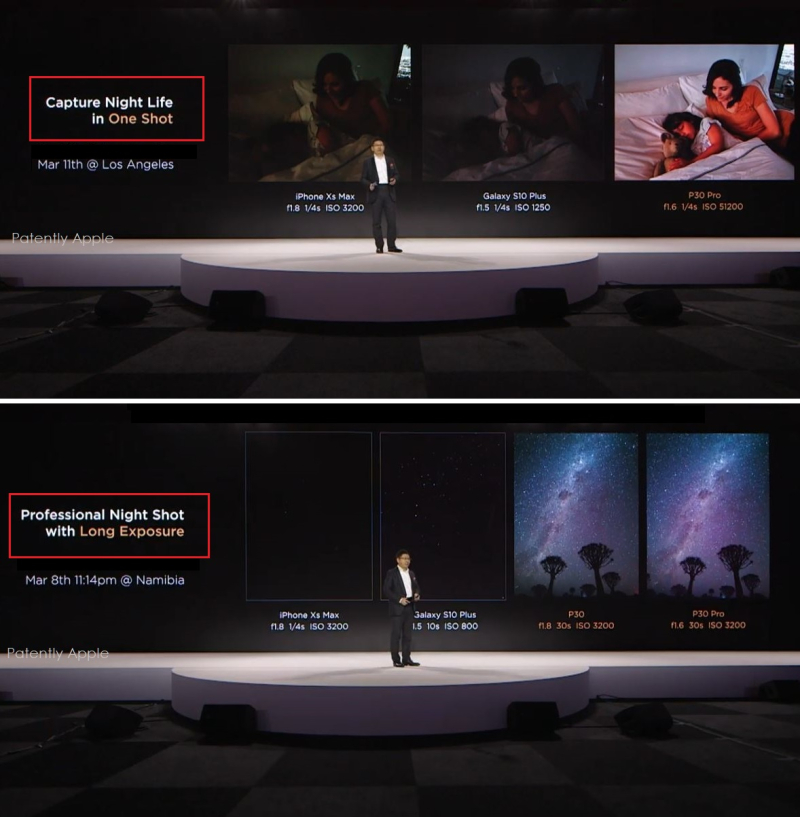 As for Google's in-air gesturing feature, Apple has been working on this for years and you could review our patent archives on this technology segment. Once again a competitor gets the leap on Apple even though Apple has a long history researching this technology.

If Google's implementation of this feature is a serious one and not just a gimmick, then it may push Apple to bring their patented technology to market sooner.