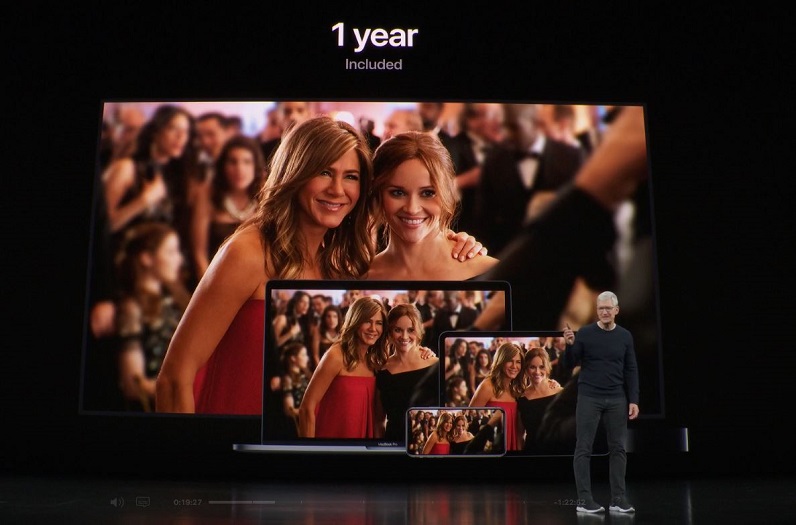 On Tuesday Apple's CEO touched on Apple TV+ during his keynote. At the 9:24 mark of the event he told fans that anyone buying a new iPhone, iPad, Mac or Apple TV would get 1 year of Apple TV+ for fee. While Apple fans were happy about that, it appears that a particular Goldman Sachs analyst wasn't.

According to a new report this morning Goldman Sachs just significantly slashed its price target for Apple, predicting 26% downside to the shares because of a "material negative impact" on earnings for the accounting method the iPhone maker will use for an Apple TV+ trial.

Goldman analyst Rod Hall, in a note. Wrote: "We believe that Apple plans to account for its 1-year trial for TV+ as a ~$60 discount to a combined hardware and services bundle."

Hall Added that "Effectively, Apple’s method of accounting moves revenue from hardware to Services even though customers do not perceive themselves to be paying for TV+. Though this might appear convenient for Apple’s services revenue line it is equally inconvenient for both apparent hardware ASPs and margins in high sales quarters like the upcoming FQ1′20 to December."

Before the bell rings on Wall Street, the news doesn't seem to be affecting Apple's AAPL stock.

Hall’s new price target is the lowest of the major Wall Street banks and the fifth lowest of all analysts that cover Apple, according to TipRanks.com. For more, read the full CNBC report.

Update, 12:30 p.m. PST: The quarter in question will be Calendar Q4, Apple's fiscal Q1 2020. While only time will tell if there's any validity to Hall's calculations, Apple in the meantime has issued a statement to CNBC: “We do not expect the introduction of Apple TV+, including the accounting treatment for the service, to have a material impact on our financial results."