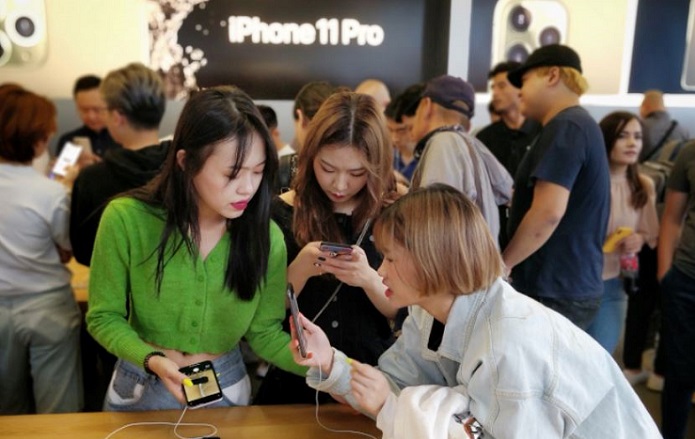 As the brand-new iPhone 11 hit the shelves in China on Friday, the iPhone 11 Pro models sold out in a flash at Apple’s flagship store in Taikoo Li Sanlitun, Beijing’s upscale retail district. Shoppers could still order the new iPhones online.

That was good news for scalpers who shouted "Stock available" to woebegone customers who had arrived at the store too late.

One scalper said that "The basic iPhone 11 line was also available, but nobody wants those."

An Apple spokesperson declined to say how many iPhone 11s were made available for purchase in stores each day.

Apple is hoping for a return to form in China after last year’s models that drew tepid responses from the country’s shoppers.

Preorder sales have been encouraging, with e-commerce giant JD.com announcing that more than 1 million iPhone 11 handsets were reserved within a day of becoming available Sept. 13.

As for the iPhone 11 Pro's design, customers generally stated that they actually mind the backside camera but noted that the shininess of the frame was a little unrefined.

As for the lack of 5G, one customer stated that he was unconcerned about that because such networks will not be widely used for another couple of years. Neither did he expect ongoing trade tensions between China and the U.S. to derail his fellow citizens’ interest in the American tech giant.

In the end he noted that "Once people know it’s cheaper, lots of them will buy it."

One competitor's fake-customer plant was roaming the story trying to talk to the press saying how ugly the phone was and basically went on a negative rant. He obviously wasn't at the store to buy an iPhone but rather stir up negative press.

As for customers not wanting the entry iPhone 11, obviously this was one of Beijing's high-end districts where residents only want the very best. I'm sure at the end of the day however, the entery iPhone 11 model will likely be the bigger seller overall in mainland China. Early adopters definitely want to get their hands on Apple's advanced camera and that great new color, Midnight Green.

More photos of that store in general, not related to the iPhone 11, could be viewed here.