Apple has released a series of new iPhone 11 Pro ads promoting a few of its new camera system advantages that you may enjoy watching. Our report also points out the three camera set up for the new iPhone 11 Pro and add a couple of videos including one with Marques Brownlee's first impressions of Apple's Pro model.

Apple states that "The iPhone 11 Pro is ready for life and everything that it can throw at it. Apple's iPhone is in a wind tunnel with vegetables, toys, sunglasses, a lipstick case, gloves, elastics and a 50 lbs cake washed away by a powerful water sprinkler spray."

While cute perhaps, we don't see practical items like keys, pocket change and things that are a little more realistic and harder. Of course in a wind tunnel that would have destroyed the iPhone and so that was never really an option (Ha!)

Though seriously, what smartphone cover couldn't withstand a soft toy or elastic band being hurled at it? The ad is creative, colorful but lame.

Apple: "Introducing the advanced triple-camera system with all new Ultra Wide, Wide and Telephoto cameras. Take photos in low-light like never before with all new Night mode. This has to be one of the biggest improvements on an iPhone camera and one everyone will greatly appreciate."

Apple: "A first look at 4K video in a series of cinematic tests on the new triple-camera system of iPhone 11 Pro. Shot on iPhone by Diego Contreras."

The video was commissioned by Apple, meaning that most of us will never come close to shooting a video that's this cool. But it does prove that the iPhone 11 when pushed with the right apps can produce some amazing holiday videos.

The new iPhone 11 Pro now offers a "Pro Camera System," according to Phil Schiller, Apple's SVP of Worldwide Marketing. You can enlarge the photo below by simply clicking on the image so that you could read the details of the triple cameras on the Pro model. 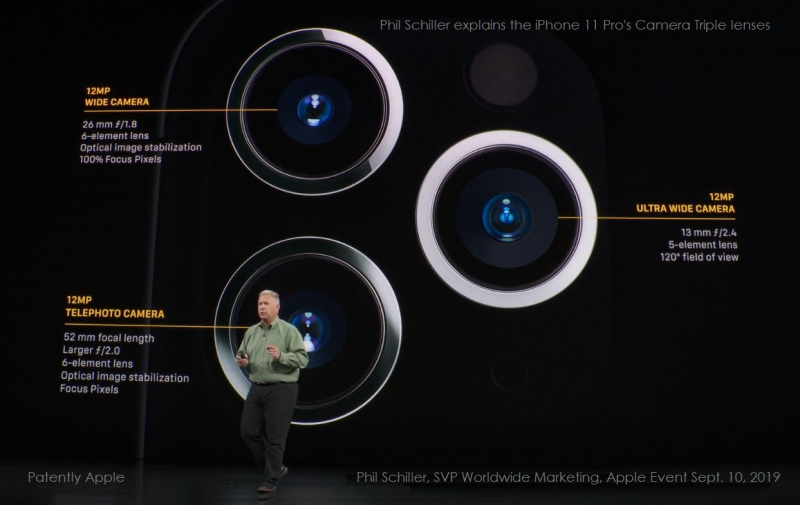 The new Telephoto Camera for the iPhone 11 Pro let's in 40% more light and it's how Apple is able to offer its powerful new 'Night Mode.'

While there are a few photos showing night mode in the wild, I'm not convinced that someone actually got their hands on an iPhone 11 Pro model this quickly. So stay tuned, a slew of "Night Mode" photos are bound to be flooding in once users get their hands on their hot new iPhone 11 Pros.

In case you missed the keynote this week, the introduction of the iPhone 11 Pro's camera system by Phil Schiller can be found starting at the 1:17:17 mark of Apple's event video below.

One of the best Vloggers in techland today weighed in with his first impressions of the iPhone 11 Pro. While Brownlee had a lot of great things to say about Apple's top end iPhone, he was equally hard on Apple marketing it as a "Pro" model without delivering true Pro features such as reverse wireless charging, Apple's ProMotion offering 120 Hz refresh rate, USB-C connectivity, Apple Pencil support and more.

Overall it's an honest video on first impressions of the iPhone 11 Pro worth checking out.