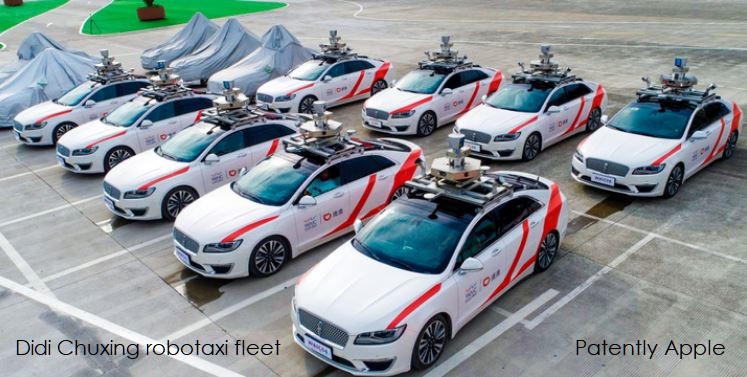 In 2016 Apple invested $1 Billion in China's Didi Chuxing. Didi’s president Jean Liu briefly noted during a conference call that the companies would benefit each other "on product, technology, marketing, and many other levels." Since that time Patently Apple has covered Apple's many Project Titan patent applications and granted patents in a vehicle technology archive that in most cases covers autonomous and semi-autonomous technologies that you can review here.

Because of Apple's Project Titan and its possible connection to Didi Chuxing, we're covering a report posted in China today about a major announcement made in Shanghai worth noting.

The report states that while Shanghai is better known for being a financial hub, it's now trying its hand in the high-tech realm with plans to take the lead in autonomous driving.

The city has become China’s first to issue licenses to intelligent connected vehicle companies, allowing them to pilot autonomous driving projects in real urban scenarios, local government officials announced on Monday. Such tests are a crucial step before things like commercial robotaxis can go into service.

Car makers SAIC Motor, BMW, as well as Didi Chuxing, are becoming the first companies to receive such licenses, and will roll out related projects in the city’s Jiading district, the government said.

Licensees can run pilot programs including robotaxis, unmanned delivery or other autonomous driving tasks with special purposes, in designated locations, according to an earlier interim document, which is also the guidance document of the pilot projects.

The robotaxis, mostly relying on automation, require a driver present as a precaution and also require that passengers sit in the back seats with seat belts fastened, said the government.

The pilot projects should charge no fees to passengers, and are prohibited from operating commercial businesses, the document said. It added that the licenses will be suspended or cancelled if any test vehicles, during rides with real passengers, violate major traffic regulations or get in severe accidents that cause casualties.

Chinese transport-tech companies are busy preparing to roll out robotaxi projects in a year or two. Supporting polices can accelerate the process by helping vehicles adapt to real road situations, though many netizens doubt whether the projects are practical.

As Didi Chuxing accelerates its robotaxi project, passengers will be able to hail self-driving vehicles from its app in a pilot robotaxi service in Shanghai.

Although it was made official today by the Shanghai Government today, Didi Chuxing knew that they got the go-ahead to test their robotaxis back on August 28 and Didi stated that they would 30 different models of L4 autonomous vehicles to provide pilot robotaxi services in Jiading District of Shanghai.

Given the complex traffic and road conditions in the mega-city, Didi will begin the program with a mixed dispatching model, which will combine both autonomous vehicles and human-driving vehicles for the duration of the pilot robotaxi project.

While Shanghai will be the first test city, it's known that China's giant Baidu is gearing up to launch a robotaxi service in Changsha later this year, while Pony.ai is carrying out its own project in the Nansha district of Guangzhou.

In the U.S., Google spinoff Waymo has teamed up with ride-hailing service Lyft to offer riders the option of a driverless car in Phoenix. Meanwhile, Tesla CEO Elon Musk said his company should have robotaxis on the roads in 2020.

Due to Apple's early investment in Didi Chuxing with a technology connection, according to its president Jean Liu, Patently Apple will from time to time report on Didi's announcements regarding their robotaxis service.