Apple Granted a Patent for a Smart Door Hinge System for Vehicles, MacBooks and Smart Homes

The U.S. Patent and Trademark Office officially published a series of 60 newly granted patents for Apple Inc. today. In this particular report we cover an Apple invention relating to a new kind of smart hinge system in which a variable feedback force is applied. The amount of feedback can be controlled and modified based on, as examples, preferences and sensed conditions. What's interesting is the scope of the invention. According to Apple, the new variable feedback force hinge can apply to a future MacBook Pro, a future Project Titan vehicle and more.

While the heart of Apple's patent relates to a vehicle door related to Apple's Project Titan, due to two of the inventors being ex-Tesla engineers, the invention is protected at the patent claims level as also applying to a future laptop (MacBook Pro).

Smart Hinge For MacBooks: Apple states that "Feedback regarding end limits of travel, simulated detents, and other types of feedback supplied using the hinge control process may be applied, for example, to a laptop computer with a hinged display screen in order to provide tactile feedback to the user when opening and closing the hinged display screen relative to the base portion of the laptop computer.

In addition, feedback may be applied to the hinged display screen of a laptop computer to indicate battery state of charge, by modulating the force of simulated detents based on state of charge.

Smart Door Hinge for Vehicles: In respect to the invention relating to a smart vehicle door hinge Apple notes that in some implementations, the force profile may be modified to provide tactile feedback. For example, the resisting force may be increased, or a vibration (buzzing) may be applied using a sawtooth waveform in order to warn of hazardous conditions on the other side of a door.

Operation of the motion control component based on the proximity signal may be applied to a fixed-location door to prevent the door from being opened rapidly toward an unseen person. This may be applied to a door on a movable structure, such as vehicle, to prevent the door from contacting external objects that are temporarily positioned near the door.

In some embodiments, the proximity sensor may be applied to a door and be configured to detect proximity of an object between movable and fixed portions of the door (e.g., the first structure #104 and the second structure #106), and increase the resisting force to restrain the door from pinching the object between the fixed and movable portions.

In some implementations, the force profile may be configured to hold the first structure relative to the second structure in a "closed" position, such that the hinge assembly 100 functions as a lock. In such implementations, the controller 320 may receive signals from other components, such as metal detectors, magnetic strip card readers, voice recognition systems, RFID readers, fingerprint readers, retinal scan devices, and other sensor systems that could serve to modify behavior of the motion control component, such as by opening in response to presence of a credential, automatically opening in response to presence of a person, or automatically locking based on presence on an unauthorized person.

Smart Home - Smart Room Door Hinge: In some implementations, operation of the hinge assembly, including signals from any of the included sensors from the motion control system, can be used as input signals for an occupancy detection system. For example, when the hinge assembly is incorporated in a door for a room, use of the door can be detected by the motion control system, reported to the occupancy detection system and used to perform functions such as turning on lights. 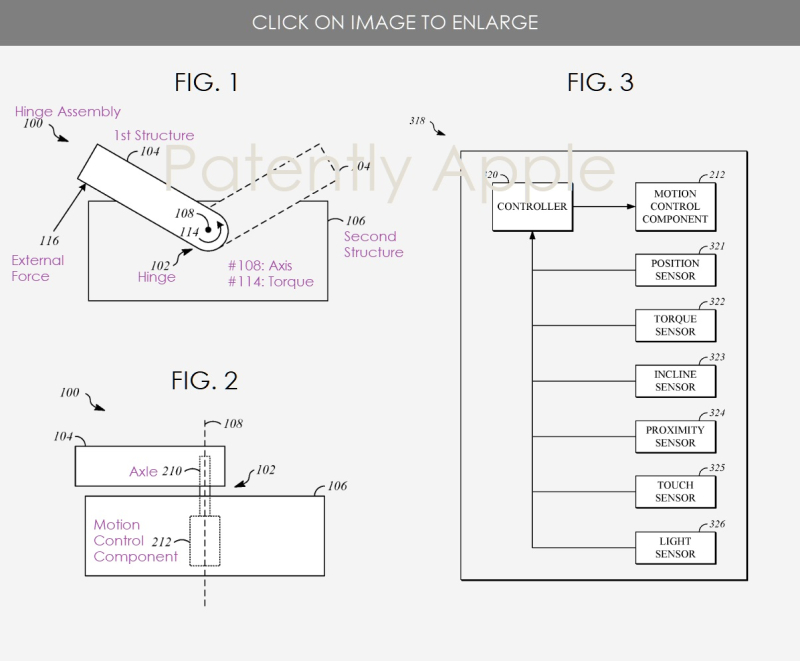 Apple's granted patent 10,415,286 was originally filed in Q3 2017 and published today by the US Patent and Trademark Office.