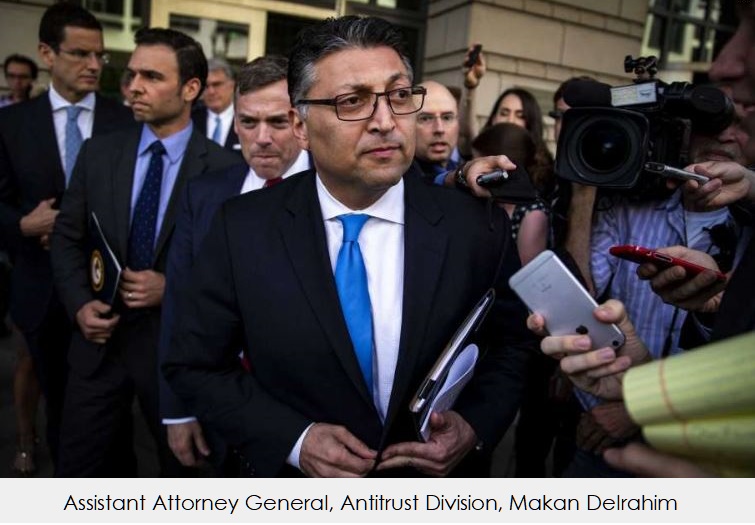 A report surfacing yesterday reveals that Assistant Attorney General of the Antitrust Division, Makan Delrahim said at a conference in Colorado that the U.S. Justice Department is working with a group of more than a dozen state attorneys general as it moves forward with a broad investigation into major technology companies. The Reuters report listed Amazon, Apple, Facebook and Google as some of the companies that are the main targets of the investigation.

Delrahim added that the government is looking at previously approved acquisitions as part of a broad antitrust review, something that the FCC Chairman Joseph Simons first announced last week.

“Those are some of the questions that are being raised ... whether those were nascent competitors that may or may not have been wise to approve,” Delrahim said. “Whether the intention of the incumbent was to purchase some of those competitors, I don’t know. I’m not privy to the facts of each of those investigations.”

Delrahim further stated at the conference: "I think it’s safe to say more than a dozen or so state attorneys general that have expressed an interest in the subject matter."

U.S. Representative David Cicilline, a Democrat who chairs a House panel that oversees antitrust issues, said on Tuesday, "Big tech platforms aren’t going to regulate themselves. I’m pleased that several state attorneys general are now conducting their own investigation into the dominance of these firms."

The New York Attorney General’s office said on Monday it is continuing to "engage in bipartisan conversations about the unchecked power of large tech companies."

North Carolina’s attorney general, Josh Stein, is also "participating in bipartisan conversations about this issue," his office said. If you remember, Apple and 68 other firms (mostly tech) filed legal filings about forcing North Carolina to provide transgender washrooms. Will North Carolina be looking for a little revenge in this probe? Perhaps, though that will never be made public.

The Federal Trade Commission in June told Facebook it had opened an antitrust investigation. For more on this, read the full Reuters report.