When Apple's CEO Tim Cook announced that Apple would miss its first fiscal Quarter of 2019, it triggered as series of lawsuits. The latest lawsuit has been filed by Nevada citizen Terrence Zehrer who has been a stockholder of Apple Inc.'s since August 19, 2014. Officially, Zehrer is suing certain of Apple's officers and directors for breach of fiduciary duty, waste of corporate assets, unjust enrichment, and indemnification and contribution, in connection with the Individual Defendants' responsibility for ensnaring Apple in an unlawful scheme. These wrongs resulted in billions of dollars in damages to Apple's reputation, goodwill, and standing in the business community.

In the bigger picture, the lawsuit isn't against Apple for just missing their Q1 2019 target. The lawsuit covers Apple and its fiduciaries making misleading statements concerning the iOS updates, the battery replacement program, macroeconomic issues in China, and the Company's future prospects, among other things. 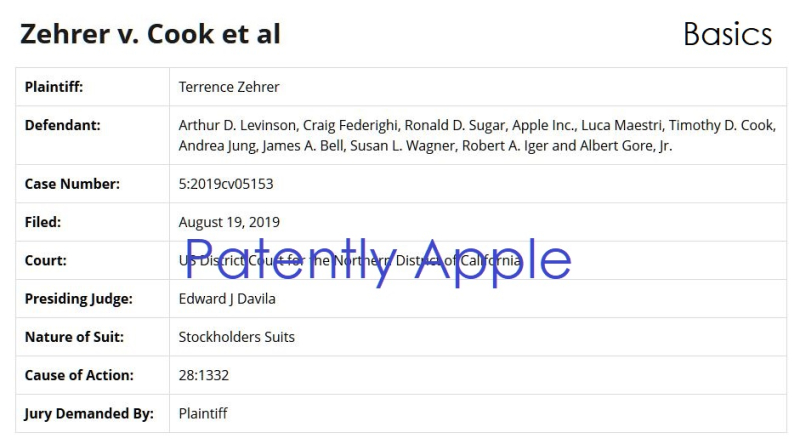 The Nature and Summary of the Action

The following is the full Summary as presented in the lawsuit filed in the Northern District of California, San Jose Division:

"This is a stockholder derivative action brought by plaintiff on behalf of nominal defendant Apple Inc. ("Apple" or the "Company") against certain of its officers and directors for breach of fiduciary duty, waste of corporate assets, unjust enrichment, and indemnification and contribution, in connection with the Individual Defendants' (as defined herein) responsibility for ensnaring Apple in an unlawful scheme. These wrongs resulted in billions of dollars in damages to Apple's reputation, goodwill, and standing in the business community. Moreover, these actions have exposed Apple to billions of dollars in potential liability for violations of state and federal law.

Apple is a multinational technology company that designs, develops, and sells consumer electronics. The iPhone smartphone is Apple's most popular product and by far the most profitable, generating nearly two-thirds of the Company's net sales in fiscal year 2017 and 2018. As a result of Apple's financial success depending upon the iPhone and due to the smartphone market's competitive nature, the Company typically releases a new iPhone model each year with more innovative features at increased prices. Apple also routinely publishes updates to the operating system utilized by the iPhone, known as iOS. Because most applications require the most recent version of iOS, updating iOS is effectively required for iPhone users. In some cases, iOS updates are even automatic.

In late 2016, older model iPhones began shutting down inexplicably and without warning. Unknown to consumers at the time, these shutdowns were not caused by the age of the iPhone itself, but rather the iPhone's aging battery—which delivered power unevenly and could not handle processing demands. Therefore, simply replacing the battery on these older model iPhones would have resolved the issue. Instead of alerting customers about this solution, beginning in January 2017, Apple published iOS updates that secretly "fixed" the shutdown issues by dramatically slowing the performance of older iPhone models without the owner's knowledge or consent. These updates silently introduced a trade-off between battery life and performance reduction without informing iPhone owners that a simple $79 replacement battery would restore both. This deceived older model iPhone owners into believing their devices could no longer perform at an adequate level, coercing them into upgrading to newer iPhone models on accelerated timetables.

In December 2017, independent investigations unearthed that Apple was deliberately causing these slowdowns in older iPhone models through iOS updates. The independent investigations also revealed, importantly, that the underlying cause was not device-related, but battery-related, and that therefore replacing the iPhone's battery would have resolved the issue. These reports heightened suspicion that Apple was using planned obsolescence to force users into buying new iPhones.

Faced with consumer outrage and confronted with the overwhelming evidence from these investigations, on December 20, 2017, Apple was forced to belatedly admit to intentionally slowing the performance of older model iPhones. This controversy came to be known as "Batterygate." On December 28, 2017, in response to the backlash, Apple announced that it would offer replacement iPhone batteries at a discount, charging $29 instead of $79.

As a direct result of this unlawful course of conduct, consumers from around the world began filing class action lawsuits against Apple in state and federal courts alleging violations of computer intrusion laws, consumer-protection laws, and the common law. Several of these actions were consolidated into a putative worldwide class action pending in the U.S. District Court for the Northern District of California under the caption In re: Apple Inc. Device Performance Litigation, No. 5:18-md02827-EJD (the "Worldwide Class Action"). The Worldwide Class Action asserts seventy-six causes of action arising under one federal statute, all fifty states' statutes, and the common law seeking enjoinment, actual and statutory damages (including punitive damages), as well as restitution. The plaintiffs generally allege that Apple intentionally and significantly reduced the performance of certain iPhone models through iOS updates without the users' knowledge or authorization.

On October 1, 2018, Judge Edward J. Davila granted in part and denied in part Apple's motion to dismiss several claims in the Worldwide Class Action's amended consolidated complaint Specifically, Judge Davila ruled that the following claims survived the motion to dismiss: (i) the federal Computer Fraud and Abuse Act ("CFAA") claim; (ii) the California Computer Data Access and Fraud Act claim ("CDAFA"); (iii) the trespass to chattels claim under California common law; and (iv) the California Unfair Competition Law ("UCL") claim. In upholding the claim under the CFAA, a federal criminal statute that authorizes civil actions, the court found the plaintiffs' "adequately pled that Apple [intentionally] caused damage to their iPhones without permission." The court further noted the allegations of slowed processor speeds caused by the iOS updates "readily fit" the definition of damages, and that "even though [p]laintiffs voluntarily installed the iOS updates, they never gave permission for Apple to cause damage to their iPhones." For similar reasons, the court also rejected Apple's motion to dismiss the CDAFA claim, the California state analogue to the federal CFAA codified in the California Penal Code. As to the trespass to chattels claim, the court found the plaintiffs sufficiently alleged that Apple "intentionally and without authorization interfered with plaintiffs possession of their iPhones … [through] iOS updates … designed to slow their iPhones' processing speed." The court further found the plaintiffs alleged an injury by pleading "that the iOS updates impaired the functioning of their iPhones by substantially slowing their processing speed (by as much as 50%)."

There is also a California state court consolidated class action pending in the Superior Court of the State of California for the County of San Francisco, captioned Apple OS Cases, JCCP No. 4976, asserting substantially similar claims under California law and based on facts nearly identical to the Worldwide Class Action. On June 20, 2019, Judge Anne-Christine Massullo overruled Apple's demurrer to the plaintiffs' UCL and trespass to chattels claims, granting the plaintiffs leave to amend certain claims that were sustained upon Apple's motion to demurrer.

Further yet, Apple is confronted with governmental scrutiny and federal regulatory proceedings due to these iOS updates. As reported by Bloomberg on January 30, 2018 and subsequently confirmed by Apple, both the U.S. Department of Justice ("DOJ") and the SEC are investigating Apple's disclosures concerning the software updates.

Scrutiny and reprimand of Apple's actions extends even beyond the United States. International governments have similarly commenced or are in the process of regulatory proceedings and investigations concerning Apple's conduct, including Canada, Israel, Italy, China, South Korea, France, Brazil, and Spain. Notably, on October 24, 2018, Italian regulators ordered Apple to pay €5 million, the maximum fine, finding that the Company had "implemented dishonest commercial practices" and that the iOS updates "caused serious malfunctions and significantly reduced performance, thus accelerating phones' substitution." Italy fined Apple an additional €5 million for failing to give customers clear information about essential characteristics of their batteries, including their average life expectancy and how to maintain or replace them.

The list of harm caused by Batterygate continues. Between August 1, 2017 and January 2, 2019, Apple made a series of improper statements concerning the Company's sales growth and future financial prospects in the Company's press releases, public filings with the SEC, and during earnings calls. In particular, the Individual Defendants routinely touted strong iPhone demand while concealing that this demand was driven by Apple's intentional and undisclosed throttling of iPhones and while downplaying the negative impact of the battery replacement program and macroeconomic issues in China.

On January 2, 2019, Apple revealed the truth about its declining iPhone sales. In a press release titled "Letter from Tim Cook to Apple Investors," the Company revealed that, due to plummeting iPhone sales, Apple would fail to achieve the revenue guidance established just eight weeks earlier. In the press release, Apple attributed blame for the lack of upgrades on the battery replacement program as well as economic issues in China, concerns that the Individual Defendants had previously renounced when raised by analysts during Apple's earnings conference calls.

As a direct result of these improper statements, Apple is now the subject of at least two federal securities class action lawsuits filed in the U.S. District Court for the Northern District of California on behalf of investors who purchased Apple's shares (the "Securities Class Actions"). The Securities Class Actions assert claims against Apple and defendants Timothy D. Cook ("Cook") and Luca Maestri ("Maestri") for violations of sections 10(b) and 20(a) of the Securities Exchange Act of 1934 (the "Exchange Act"). In particular, the Securities Class Action complaints allege that Apple and its fiduciaries made misleading statements concerning the iOS updates, the battery replacement program, macroeconomic issues in China, and the Company's future prospects, among other things.

Plaintiff brings this action against the Individual Defendants to repair the harm that they caused with their faithless actions."

Lawsuit based on Four Counts

Count 1: Against the Individual Defendants for Breach of Fiduciary Duty

Count 2: Against the Individual Defendants for Waste of Corporate Assets

Count 3: Against the Individual Defendants for Unjust Enrichment

Count 4: Against the Individual Defendants for Indemnification and Contribution

For more details in this legal case, review the full formal complaint filed with the court below, courtesy of Patently Apple.