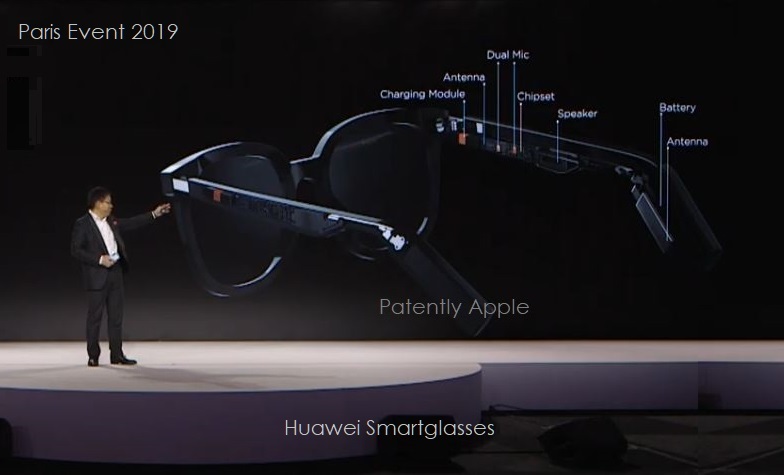 In late March Patently Apple posted a report titled "Huawei Launched new Smartphones in Paris Today and Announced Gentle Monster Smartglasses coming this Summer." Today news has surfaced in a Chinese report that Huawei along with one of South Korea’s trendiest eyewear companies will be launching a series of smartglasses in September.

The collaboration with fashion brand Gentle Monster, which is increasingly popular in China, includes two styles of sunglasses and three styles of optical glasses, all of which allow wearers to answer phone calls by tapping the part of the frame that covers the temple, according to Gentle Monster’s website.

More importantly, a staff member at Gentle Monster’s Beijing flagship store revealed that non-Huawei smartphone users can also enjoy at least some of the glasses’ functions. For example, Apple users can answer phone calls and play music on the devices.

Unfortunately the report didn't clarify if the smartglasses would work with Spotify and Apple Music.

The devices, which are charged wirelessly using a special glasses case, also play music and automatically pause tracks when they are taken off.

The products will retail at Gentle Monster outlets from September, although the company is now taking preorders. The glasses are priced from US$283 which will  be a price point that will put a lot of pressure on Huawei competitors.

Unfortunately due to Huawei being blacklisted in the U.S. only iPhone users outside of the U.S. will be able to take advantage of these new glasses.

It's definitely a way for Huawei to get at least Chinese iPhone users to use an Huawei accessory and build a relationship with Apple fans in that country.