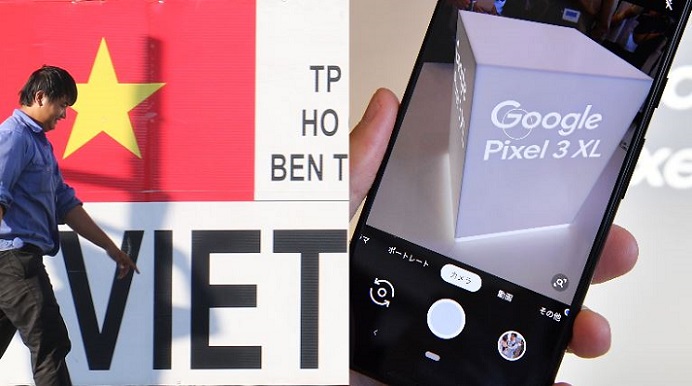 Google is moving aggressively to shift production of its Pixel smartphone from China to Vietnam as it seeks to build a low-cost supply chain in Southeast Asia that will serve as a springboard for its growing hardware ambitions, according to the Nikkei Asian Review. The report also claimed that Google has also been scooping up hardware engineers and supply chain specialists from Apple.

Working with a partner, Google started work this summer to convert an old Nokia factory in the northern Vietnamese province of Bac Ninh to handle production of Pixel phones, two people familiar with the company's plans said. This is the same province where Samsung developed its smartphone supply chain a decade ago, so Google will have access to an experienced workforce.

The push to develop a Vietnamese production base reflects the twin pressures of higher Chinese labor costs and the spiraling tariffs resulting from the trade war between Washington and Beijing. The U.S. internet giant intends to eventually move production of most of its American-bound hardware outside of China, including Pixel phones and its popular smart speaker, Google Home, according to the sources.

The Vietnam production lines will be a key part of Google's drive for growth in the smartphone market. Google aims to ship some 8 million to 10 million smartphones this year, double from a year ago, sources told the Nikkei Asian Review.

While Google's Pixel smartphone brand is still a minor player in the industry -- not even ranking in the global top 10, according to tech research firm Counterpoint -- it is growing rapidly.

The mid-priced Pixel, launched in April, helped Google become the fifth largest mobile brand in the U.S. for the second quarter of 2019, grabbing market share despite a wider industry slump.

Google's aggressive hardware campaign is expected to heap pressure on second-tier mobile makers such as LG Electronics and Sony, which are struggling as the industry faces its third consecutive year of decline.

By diversifying its production into Vietnam, Google hopes to ensure sustainable production of the Pixel range, a showcase for its Android operating system. Installed in 80% of the world's smartphones, Android is facing a challenge from Chinese rival Huawei Technologies, the world's second largest handset maker, which in August unveiled its own mobile platform, Harmony OS.

In 2018, Google shipped some 4.7 million smartphones, which only accounted for 0.3% of global market share, according to IDC. However it has already shipped 4.1 million units in the first half, according to IDC, thanks to the Pixel 3A, priced at $399.

Under current plans, Google will shift some production of the Pixel 3A phone from China to Vietnam before the end of this year, the people said.

Google is the latest to seek safety by diversifying its production as the trade war intensifies. HP and Dell have relocated their server production away from China to dodge Washington's punitive tariffs, while also shifting some notebook production to Taiwan and other Southeast Asian countries such as Vietnam, Thailand and the Philippines.

Apple also has started to evaluate how it might diversify its supply chain, though it remains heavily reliant on China with more than 90% of its hardware manufactured in the country. For more read the Nikkei report.

During the Q&A session of Apple's fiscal Q3 Conference Call, Wamsi Mohan, Bank of America Merrill Lynch asked Apple's CEO: "How are you thinking about the longer-term footprint for manufacturing, and can you talk about any potential alternatives that you've looked at and considered in moving parts of production potentially out of China.

In-part, Tim Cook's response was a bit mechanical by stating:  "Yeah. I know there's been a lot of speculation around the topic of different moves and so forth. I wouldn't put a lot of stock in those if I were you. The way that I view this, is the vast majority of our products are kind of made everywhere."

It was certainly a politically correct statement but everyone knows that Apple's key products like the iPhone are made in China or at least assembled in China (see the new chart at the end of this report).

On one hand Tim Cook nonchalantly dodged the issue of moving production out of China to dodge U.S. tariffs with Merrill Lynch while on the other hand whining or complaining to the U.S. President that tariffs will hurt sales against competitors.

For Apple, dramatically moving out of China would rock the boat violently and a backlash from Chinese consumers would be swift. Apple is, on the other hand, slowly building manufacturing in India that will take time to lessen their reliance on China.

If Google transitions their production out of China, then they'll avoid any current or future Tariff issues. Their current smartphone production levels are low enough where it makes sense to make the move now, if the Nikkei report actually pans out.

UPDATE: 4:08 P.M. PST: A new report by Reuters this afternoon shows just how dependent Apple is on China for manufacturing and assembly in a detailed graphic as illustrated below. 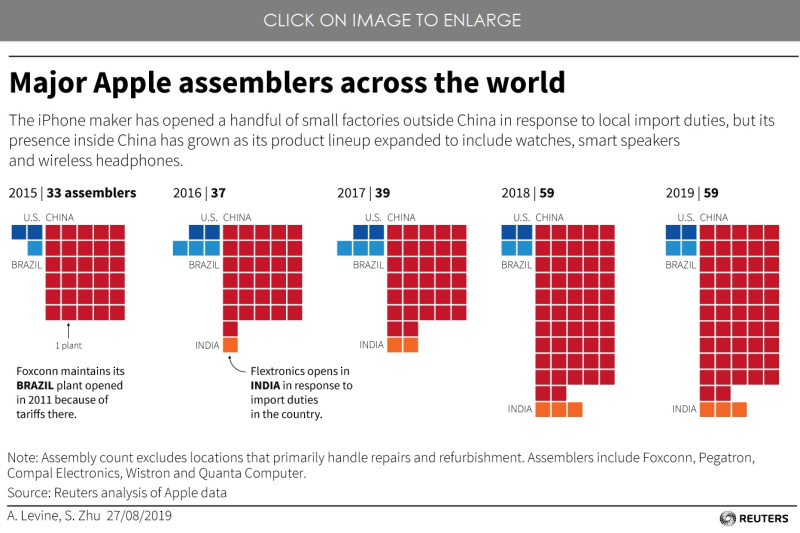