Home Archives Contact Us Subscribe Twitter MeWe Facebook Patently Mobile
Apple is spending more than ever on R&D to fulfill the 'Steve Jobs Doctrine'
Apple's CEO weighs in on the Tragic Shootings in the U.S. this past weekend by saying that it's time to stop Finger Pointing 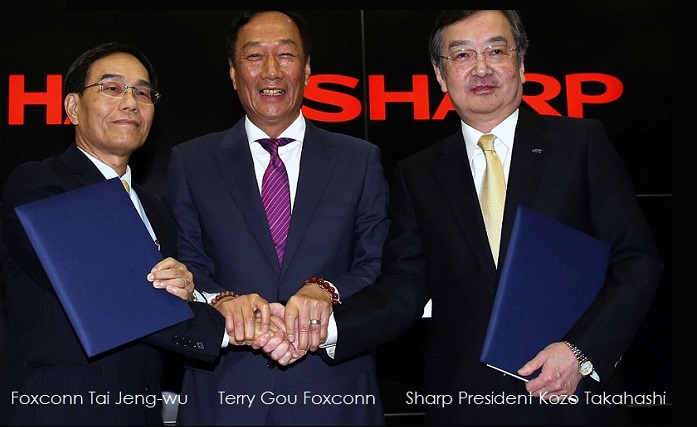 In the Spring of 2016 Foxconn aggressively acquired Sharp so that they could move into Apple's OLED display supply chain. In early 2017 it was rumored that Sharp planned to manufacture OLED displays in a plant that made iPhones. In early 2019 Digitimes and the Wall Street Journal reported that Apple was considering a major shift to OLED for their entire iDevice Line-up by 2020 and that Sharp could be a big winner in this plan followed by BOE.

On Friday Reuters reported that that Sharp announced that their new plant in Vietnam starting next year would make flat screens, electronic devices and air purifiers. While opening a plant in Vietnam, Sharp's mother company Foxconn was considering the sale of its new $8.8 Billion display plant. Even Foxconn's proposed U.S. plant plan is in limbo and likely to abandon display manufacturing.

While the Reuters report did list "flat displays," their was no clarification if that related to large OLED TV displays or OLED displays for smartphones.

For clarification we found a Business Korea report on Friday that may have cleared things up to a certain degree. Their report noted that "Japan’s Sharp will eventually withdraw from the business of manufacturing organic light-emitting diode (OLED) panels for smartphones. The company lost the competition with Korean and Chinese display makers.

Sharp shipped a total of 60,000 smartphone OLED panels in the second quarter, according to data released by IHS Markit at the end of July. However, Sharp has not been producing OLED panels for smartphones since July.

IHS Markets said, 'Sharp will no longer be producing OLED panels for smartphones as it has lost in technological and price competition with Korean and Chinese companies.'"

The Korean report added that "At the beginning of this year, industry analysts expected Sharp would strengthen its smartphone OLED panel business. As Sharp's parent company, Foxconn, is Apple's largest consignment manufacturer, Sharp was expected to develop OLED panels for the iPhone.

In the smartphone OLED panel market, Samsung Display ranks first with an 87.2 percent share, followed by BOE with 5.9 percent, Ever Display with 3.2 percent and Tianma with 1.3 percent and Visionox with 1.3 percent. The four followers are Chinese companies and are rising fast with support from the Chinese government.

LG Display currently has a market share of only 1.0 percent, but is looking to turn the tide by expanding its customer base, It will begin to supply display panels to Apple in the third quarter.

LG Display shipped only 1.38 million smartphone OLED panels in the second quarter, but is expected to ship 5.6 million units in the third quarter, boosting its market share to 2.4 percent."

While I wouldn't count Foxconn-Sharp out of the game just yet, Sharp reportedly chalked up a mere 0.1 percent market share in the second quarter which would make it very difficult for Sharp to fulfill Foxconn's dream.

Without landing a major deal with Apple that could turn their fortunes around in a nano-second, the writing on the wall currently says that Foxconn was just too late jumping into the OLED display race.