The U.S. Patent and Trademark Office granted Apple 54 newly granted patents today. Our final granted report of the day covers a fingerprint sensor patent that covers an under display application. Such a system would be welcomed and match Huawei's dual face and touch ID system on smartphones to give users a choice of biometrics. This has been pointed out before and now a rumor suggesting that we'll see such a combination on 2021 iPhones.

Other granted patents of interest today include those covering Memoji under "creative camera"; voice and touch Maps interaction on CarPlay; and a System for determining the quality of sleep acquired from Beddit. The CTO of Beddit, Joonas Paalasmaa who is listed as an inventor on this patent is now part of Apple's Health Technologies group.

As we do every week, we wrap up this week's granted patent report with our traditional listing of the remaining granted patents that were issued to Apple today.

Fingerprint Sensors beneath the Display

Another Touch ID related patent has been granted to Apple under number 10,372,962, and this one touches on the use of fingerprint sensors under the display. This is something being rumored to be ready for 2021 iPhones.

Apple's patent states that "The fingerprint sensor may operate to capacitively capture a series of images, or nodes. When taken together, these nodes may form a set of fingerprint image information. A collection of nodes may be referred to herein as a "mesh", "mosaic", "template", or other indicator of fingerprint information. The fingerprint sensor may be located in any suitable portion of the electronic device, such as beneath a display, under or along one or more walls of the device, beneath a button associated with the device, and so on. Such buttons may be physical or virtual.

Apple's patent FIG. 1 below shows a conceptual drawing of a fingerprint recognition sensor included in a portion of a device. 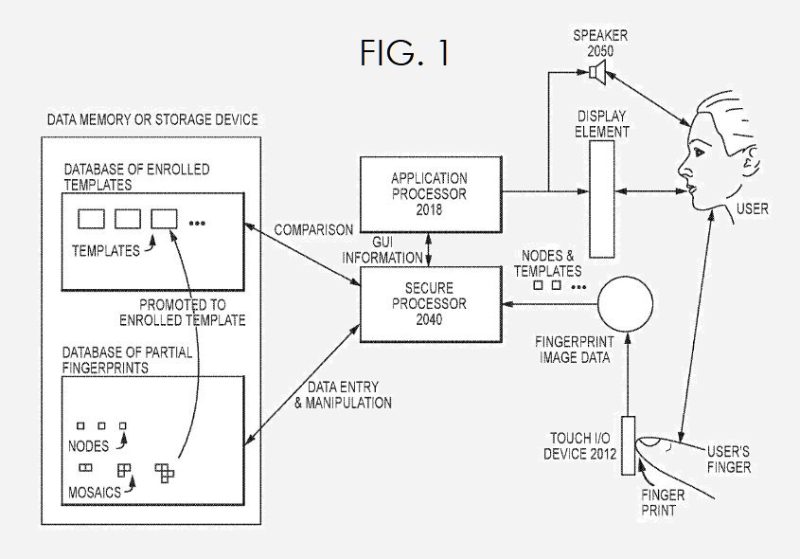