Apple was the king of tablets in Q1 and their streak continues into Q2 according to a new IDC report. Apple increased their market share Year-over-Year (YoY) from 34.1% to 38.1% more than doubling Samsung shipments. Samsung's new tablets may be presented at their Unpacked event tomorrow New York in an effort to stay ahead of Huawei which is in third position.

Apple's performance beat the overall tablet market that decllined 5% YoY. IDC noted that "Apple led the market and managed to increase its share compared to last year as the iPad maker gained 4 percentage points year over year. The launch of the detachable iPad Air in 2Q19 helped Apple to double its detachable tablet shipments. Meanwhile, slate iPads declined 7.5% year over year as the new iPads were unable to maintain the same momentum of upgrades as those launched in 2018." 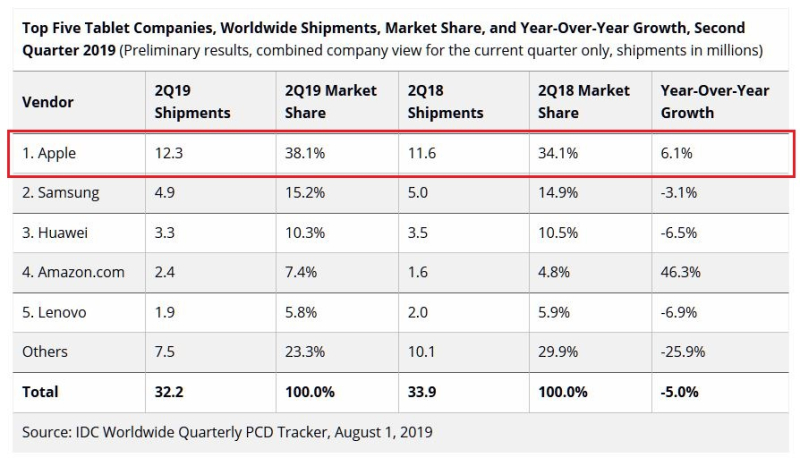 Samsung continued to hold the second position and managed to grow its share though this was simply because the market declined at a faster pace than Samsung's own tablet shipments. Although the company is the last bastion of premium Android tablets, the majority of its shipments were comprised of the lower-end E and A series.

Huawei managed to hold the third position and maintain its share despite the political headwinds. However, given the rising tensions between the U.S. and China, Huawei's future as a mainstay of the tablet market remains uncertain.