Apple AirPods Led in Hearables in Q2 2019, Crushing all for their Competitors Combined

During Apple's fiscal Q3 Financial Conference Call, Apple's CEO stated in his summary for the quarter that Apple continues "to see phenomenal demand for AirPods, and when you tally up the last four quarters, our wearables business is now bigger than 60% of the companies in the Fortune 500." A new wearables report published today on true wireless hearables shines a light on Apple's AirPods, the runaway leader in this category.

While all major regions, including the US, have shown high growth, China has more than doubled due to the success of its 618 online shopping festival and the acceleration of demand for true wireless hearables.

Apple, the top global brand, continued its leadership by expanding sales of the second-generation AirPods launched in late March with a commanding 53% as shown in their chart below. 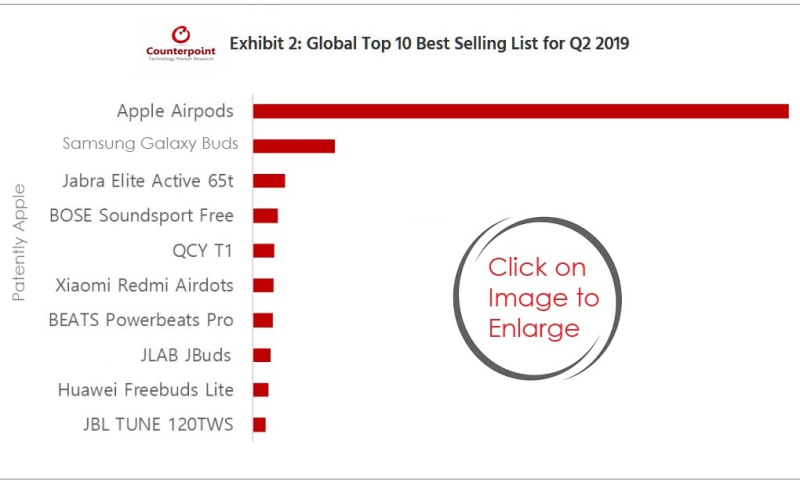 The AirPods lead is impressive because they're priced higher than the second place Galaxy Buds and aren't given away in promotions like Samsung consistently does to inflate their quarterly shipments.

While Counterpoint's report attempts to make Apple's AirPods 53% market share for Q2 appear as if it was a drop from Q1's 60% lead, they failed to provide a context for the slight drop. 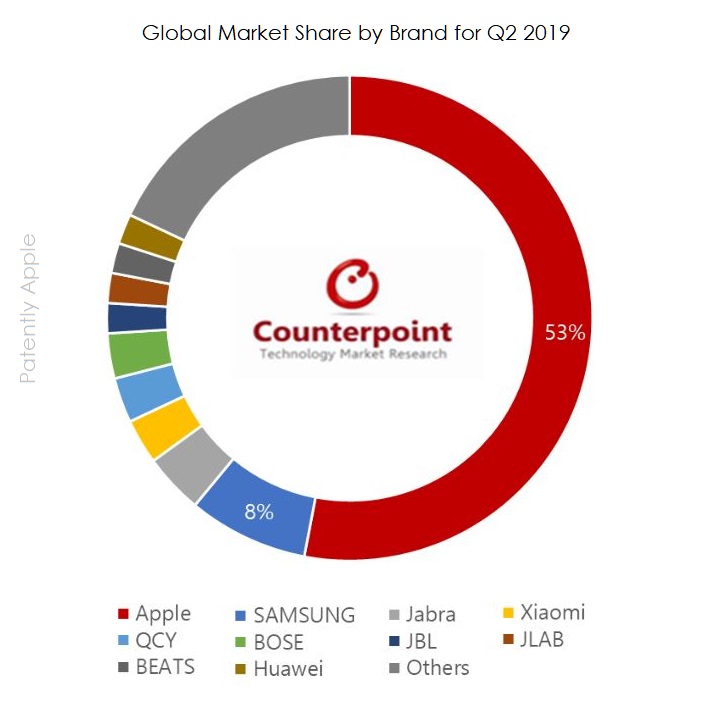 In reality, Apple owned Beats introduced their PowerBeats Pro in May. They have successfully settled in the premium market with good reviews of sound quality and design. In just half a quarter, they scored 7th position in Counterpoint's statistics. PowerBeats Pro sell for a higher price than AirPods which is impressive. If you combine PowerBeats Pro to AirPods stats, Apple likely came in at 60% or higher for the quarter.

Companies like Samsung and Huawei often give away their hearables and analytical research companies like Counterpoint never mention that this practice distorts their statistics. There is no penalty for give-aways except that it takes away from Apple's true lead which is likely higher than presented in the Counterpoint report.

The reviews for AirPods have been great. Toms Guide rated them 4 out of 5 stars in June and called them "Almost Magical." C/Net rated AirPods2 4 out of 5 stars. Engadget rated them 4 out of 5 (or 83%) and Mashable did the same. Of course there's always one that loves to go against the grain, like the Consumers Report. While I'm sure Android fans loved that review, with some Android sites naturally playing that up, it rings hollow in light of Counterpoint's statistics for Q2 2019. If the Galaxy Buds were that great, then they would have scored higher globally.