After Apple's Announcement of Investing more in America, Cook Dined with the President and First Lady on Friday 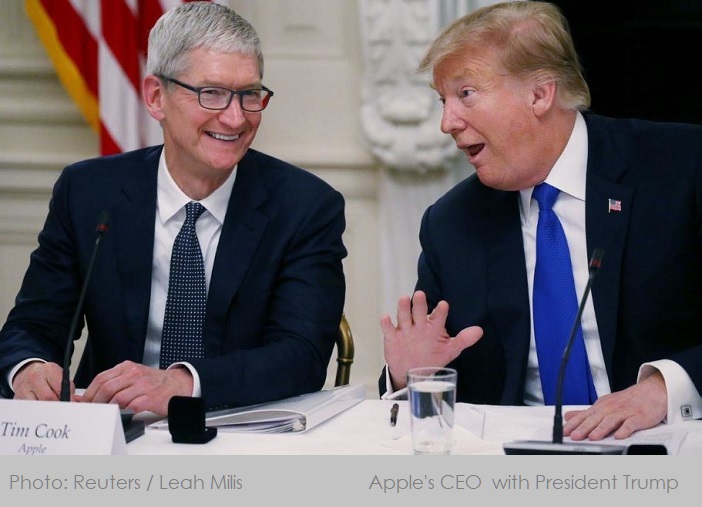 REPORT UPDATE 4:20 A.M. 8/19/2019: On Sunday President Trump revealed one of Tim Cook's Argument's on Tariffs made during Friday's Dinner meeting

Apple's CEO had dinner at the White House on Friday. President Trump announced it on his twitter site earlier that day. Cook has had several such dinners with the President this year, according to many sources.

Having dinner tonight with Tim Cook of Apple. They will be spending vast sums of money in the U.S. Great!

The President's tweet was in reference to Apple's revelations on Thursday that they're responsible for creating and supporting 2.4 million US jobs across all 50 States.

Reuters noted that "Another round of U.S. tariffs on Chinese imports had been due to take effect in Sept. 1, but the Trump administration this week delayed the tariffs on some products until Dec. 15. 'We’re doing this for Christmas season, just in case some of the tariffs would have an impact on U.S. customers,' Trump said on Tuesday after the announcement.

Levies on Apple’s MacBooks and iPhones were delayed until December, while tariffs on its AirPods, Apple Watch and HomePod will go into effect as scheduled next month.

Our cover photo from Reuters is one of the few that show Apple's CEO talking to the President with an honest natural smile. Most media outlets try to limit negative photos of Cook looking depressed and uptight (01, 02 & 03) when meeting with the President supporting a negative left wing bias and agenda. Thumbs up to Reuters for bucking this political slant and presenting an honest photo.

UPDATE AUG. 19, 4:14 A.M.: CNBC Sunday: "President Donald Trump said he talked to Tim Cook about tariffs and Apple’s South Korean competitor Samsung.Trump said Cook made a 'good case' that it would be difficult for Apple to pay tariffs, when Samsung does not face the same hurdle because much of its manufacturing is in South Korea."I thought he made a very compelling argument,'" Trump told reporters Sunday.