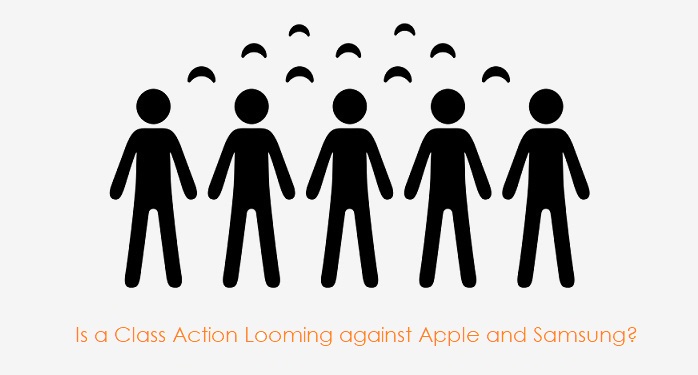 The topic of cell phones generating dangerous levels of radiation has been ongoing for a long time. One study in 2005 linked cellphones to brain tumors. Others studying this issue includes the American Cancer Society, the National Cancer Institute and the National Toxicology Program which used multiple iPhone images surrounding their article on the matter.

This week the Chicago Tribune posted their study findings of radiation levels found in  smartphones and suspiciously within 24 hours a law firm published a press release about a potential class action lawsuit. The law firm mentions in passing that they've filed previous cases against Apple. Apple is therefore the likely target of a future class action lawsuit from this law firm.

The Chicago Tribune's report states that "The Federal Communications Commission, which is responsible for regulating phones, states on its website that if a cellphone has been approved for sale, the device "will never exceed" the maximum allowable exposure limit.

A recent smartphone test which was paid for by the Chicago Tribune, conducted according to federal guidelines at an accredited lab, produced a surprising result. Radiofrequency radiation exposure from the iPhone 7 — one of the most popular smartphones ever sold — measured over the legal safety limit and more than double what Apple reported to federal regulators from its own testing, the Tribune reports."

The Tribune tested Apple iPhones including the iPhone 7, iPhone 8 and 8 Plus and finally the iPhone X. The Tribune also tested Samsung's Galaxy S8, S9 and J3. Also texted 3 Motorola phones and one from China's Vivo.

The Samsung Galaxy S8 scored the highest radiation of 8.22 according to the Federal exposure limit; One of Apple's Phone 7 models scrored the second highest at 7.15 at 2mm from a user's body.

The Tribune's report further noted that "Industry officials and manufacturers emphasize that before a new model can be brought to market, a sample phone must be tested and comply with an exposure standard for radiofrequency radiation. But manufacturers are allowed to select the testing lab — and only a single phone needs to pass in order for millions of others to be sold.

Companies testing a new phone for compliance with the safety limit also are permitted to position the phone up to 25 millimeters away from the body — nearly an inch — depending on how the device is used. That’s because the testing standards were adopted in the 1990s, when people frequently carried cellphones on belt clips.

In one phase of the Tribune testing, all phones were positioned at the same distance from the simulated body tissue that the manufacturers chose for their own tests — from 5 to 15 millimeters, depending on the model. Apple, for instance, tests at 5 millimeters.

After reviewing the lab reports from the Tribune’s tests, the FCC said it would take the rare step of conducting its own testing over the next couple of months."

agency spokesman Neil Grace stated: "We take seriously any claims on non-compliance with the RF (radiofrequency) exposure standards and will be obtaining and testing the subject phones for compliance with FCC rules."

When informed of the Tribune’s test results and provided with the laboratory’s 100-page lab report, Apple disputed the findings, saying they were not performed in a way that properly assesses iPhones.

The Tribune’s tests were conducted by RF Exposure Lab, a facility in San Marcos, Calif., that is recognized by the FCC as accredited to test for radiofrequency radiation from electronic devices. For 15 years, the lab has done radiation testing for wireless companies seeking government approval for new products.

Lab owner Jay Moulton said all the Tribune’s tests were done in accordance with detailed FCC rules and guidelines. Moulton further noted that "We’re not doing anything extraordinary or different here,” Moulton said. Any qualified lab "should be able to grab a phone off the shelf and test it to see if it meets requirements."

Apple, one of the world’s most iconic brands, would not say specifically what it thought was wrong with the Tribune’s tests or reveal how the company measures its phones for potential radiofrequency radiation exposure.

Still, based on Apple’s feedback, the Tribune retested the iPhones in the investigation as well as an additional iPhone 7, making a change aimed at activating sensors that would reduce power.

Once again, the iPhone 7s produced results over the safety limit, while an iPhone 8 that previously measured over the standard came in under.

When informed of the new results, Apple officials declined to be interviewed and requested the Tribune put its questions in writing. The newspaper did, submitting three dozen, but Apple did not answer any of them.

Apple then issued a statement, repeating that the Tribune test results for the iPhone 7s "were inaccurate due to the test setup not being in accordance with procedures necessary to properly assess the iPhone models."

The statement further noted that "All iPhone models, including iPhone 7, are fully certified by the FCC and in every other country where iPhone is sold. After careful review and subsequent validation of all iPhone models tested in the (Tribune) report, we confirmed we are in compliance and meet all applicable … exposure guidelines and limits."

Apple did not explain what it meant by "careful review and subsequent validation."

Lastly the Chicago Tribune's report states that "When Apple submitted its application to the FCC to market the iPhone 7, the company included a similarly worded radiation statement, suggesting users carry the device at least 5 millimeters from the body, records show. But iPhone 7s eventually sold to the public did not include that advice.

When the Tribune asked Apple in its written questions why that suggestion was not included, the company did not respond." This is a detailed report and to learn more about it, read the the Chicago Tribune report.

The timing of the Chicago Tribune report on radiation is interesting considering that its finding may be used  in a class action lawsuit being considered by Fegan Scott.

Beyond their tweet, the law firm of Fegan Scott published a press release wherein Beth Fegan, a managing partner, said that "this could be the Chernobyl of the cell phone industry, cover-up and all." Can they be any more dramatic?

Fegan further stated that "If we found that produce sold in grocery stores contained twice the levels of pesticides as the law allows, we would be up in arms, demanding the products be pulled from the shelf – this is no different. In this case, we know the cell phone radiation is dangerous, but the terrifying part is that we don’t know how dangerous, especially to kids’ brain development."

It took over a half century to  finally break the tobacco industry through repeated lawsuits and changing times. With smartphones being a mass market bringing in staggering profits for many top smartphone makers, a single class action is unlikely to make a dent on this issue in the short term while the industry is still sizzling hot.