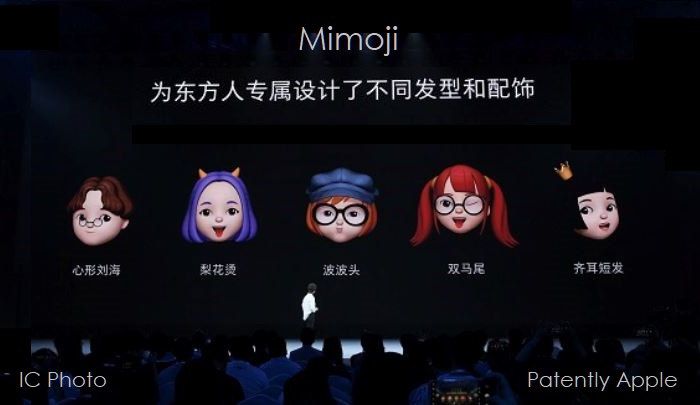 According to Xiaomi, their augmented-reality avatar set, Mimoji, is definitely not a clone of Apple’s Memoji — they just look very similar and happen to share identical-sounding names. What an ignorant statement. This is clearly a trademark infringement case that Apple's legal team could make if they so choose to.

On the flip side, Xiaomi could argue that they own the "Mi" trademark and therefore adding moji as a suffix for emojis doesn't infringe on Apple's trademark. We'll continue the trademark aspect of this report further below. We start our report with a story that came out of mainland China today.

A Chinese publication pointed out in a report today that ads for Apple’s Memoji and Apple Music had been embedded on Xiaomi’s product page for the Mi CC9 smartphone on e-commerce platforms JD.com and Suning, in lieu of original Xiaomi graphics, a Weibo user found (in Chinese) on Friday.

Xu Jieyun, Xiaomi’s general manager for public relations, responded in a Weibo comment that the e-commerce mix-up was caused by staff "uploading the wrong content."

The report further noted that Xiaomi "has faced skepticism after unveiling its Mi CC9 smartphone, which has the Mimoji feature built in. Social media users (Weibo, Chinese) and tech websites like Engadget have pointed out the striking resemblance between a new range of human Mimoji and Apple’s Memoji, which were introduced last year. Both functions allow smartphone users to create 3D characters that mirror their own facial expressions.

This isn’t the first time that Xiaomi has been accused of copying Apple. According to Vanity Fair, Apple’s head of design Jony Ive once called Xiaomi out at a conference saying: 'You spend seven or eight years working on something, and then it’s copied. . . . I think it’s theft, and it’s lazy.'"

Lastly, the Chinese report noted that "Whatever the origin of Mimoji is, it’s unlikely that the similarities between Xiaomi and Apple avatars will spark a legal dispute." Mainly because "Apple doesn’t own the concept of augmented reality avatars, which many companies have already dabbled in."

More importantly, the report pointed out that "the U.S. trademark for Memoji doesn't belong to Apple – that it was filed with patent authorities by a little-known tech company based in Atlanta, Georgia, in April 2016."

The Chinese report linked to an USPTO trademark page which you can't do without the link breaking. So we're providing the results of a search for 'Emoji' in the U.S. Patent and Trademark Office database and the results are as presented below. The first two numbers (88158604 and 87397135) are Apple trademark applications for the word Emoji.

The third entry shows that 'Emoji' was registered / granted under #5566242. Following the link led to the trademark registered to "SOCIAL TECHNOLOGIES LLC LIMITED LIABILITY COMPANY," out of Georgia.

More importantly is that Apple filed their two trademarks for Emoji under International Classes 09, 21, 26, 36 and 38 – the very same classes already approved by USPTO for the Georgian company.

I point that out because you can't have one trademark owned by various companies if the execution or products are generally for the same thing. You can have many companies using the same word oriented trademark as long as the applications and industries are different.

To make this clearer, a copy of one of the Suspension Notices from the U.S. Patent and Trademark Office to Apple regarding the suspension of its second application for Emoji is presented below. 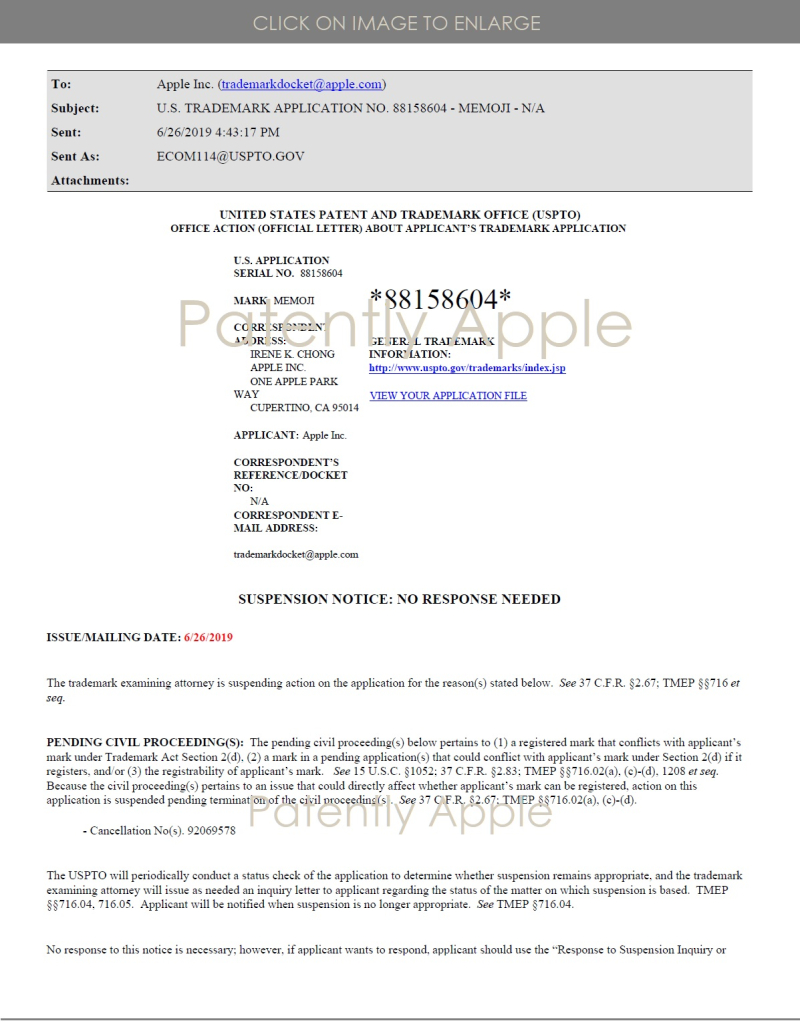 While Apple may appeal the two decisions made by USPTO's trademark examining attorney's on both December 26, 2018 (for application #87397135) and on June 26, 2019 (for application #88158604) to suspend / cancel Apple's Emoji trademark application, for now, Apple may have to begin thinking of another name for their Emoji or acquire it from the Georgian company for an obscene amount of money if the company decides to play hardball.

The end result is that Xiaomi of course will never be able to use "Mimoji" in the US market as well as it's far too close in spelling to the Memoji trademark and for a similar product type. With Xiaomi owning the "Mi" trademark, it could in some way complicate matters but that's down the road and not for this report.

Now it gets a little more complicated and interesting for the Emoji trademark in China. Xiaomi may not be aware that Apple actually owns the Memoji trademark in Hong Kong as noted in a partial graphic from the Hong Kong database below. 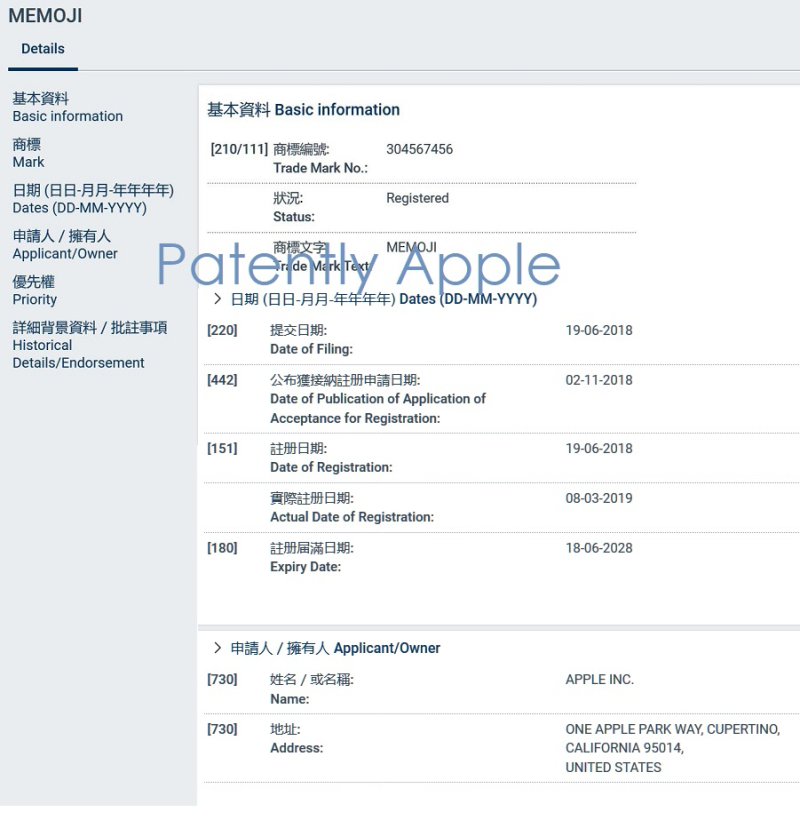 I'm sure Xiaomi sells smartphones in Hong Kong and Apple could make life difficult for them on the basis of the trademark alone. While a Xiaomi executive may have shrugged it off by saying that it's okay to have similar names for the same product, it's legally not that simple. It could easily be a case of trademark infringement or trademark dilution.

Apple's Jony Ive thought that Xiaomi was stealing from Apple years ago and clearly Xiaomi prides itself in being able to blatantly copy Apple and get away with it. If Apple ever thought it was a big enough infraction, Apple legal would pull the trigger – and it's far too early to make that call at present.

Stay tuned, as this story hasn't legally ended just yet either in the U.S. or Hong Kong on the matter of trademark infractions. The story could take many future twists and turns or simply die a quite death. Which way it finally sways is anyone's guess at this point in time.