The Launch Date of the Galaxy Note 10 may be delayed due to Japan's restrictions of key materials, unknown if iPhone is next 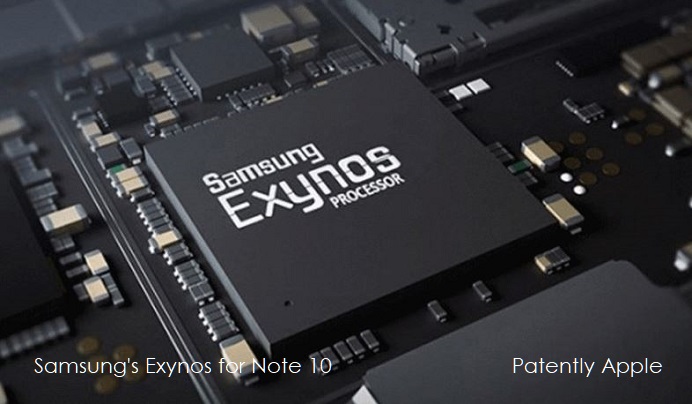 In late June Patently Apple posted a report titled "Apple's Display Partners Samsung & LG Caught up in Political Ruling with Japan that could disrupt the Smartphone Sector." More specifically, smartphone materials that Japan will be restricting sales to South Korea include fluorinated polyimide which is used in smartphone displays, and resist and high-purity hydrogen fluoride (HF), which is used as an etching gas in the making of semiconductors.

We further noted in the report that Samsung and LG had likely stockpiled the materials in question so as to keep production of iPhones and iPads and other products uninterrupted during the all-important Q4, the busiest quarter of the year.

While that may remain to be the case, Japan's is on the verge of actually expanding their export restriction against South Korea and tensions are rising at Samsung.

Samsung Electronics Vice Chairman Lee Jae-yong returned from his critical business trip to Japan late on Friday. Lee told the company’s device solutions and display divisions the very next day in an emergency weekend meeting that they had to work on a contingency plan with regard to Japan’s semiconductor and display material export restrictions.

A Samsung executive told a Korean publication that "The vice chairman succeeded in procuring some of the restricted materials – that is, photoresist, hydrogen fluoride, and fluorine polyimide, during his business trip to Japan." Reportedly inventory of the materials were procured via Japanese material suppliers’ production facilities outside Japan.

Obviously Samsung didn't procure enough of the restricted materials leading Lee to demand a contingency plan at the meeting. Lee stated at the meeting that Samsung Electronics’ products such as mobile phones and TVs as well as semiconductor components can be affected without exception once Japan’s export restrictions are expanded.

The reality of the situation was immediate. A second Korean report is reporting that the production of their next-gen Exynos designed for the upcoming Galaxy Note 10 will temporarily slow down which could affect Galaxy Note 10 production. This news came directly from a Samsung executive on a local TV broadcaster JTBC.

The hiccup in production for semiconductors may be short lived as Samsung may have decided to expand orders of Qualcomm's Snapdragon processors to replace any missing Exynos processors.

While Samsung said that their unpacked event scheduled in New York is still on, they may decline to reveal an official release date until they're able to get a realistic grasp of the situation as they begin receiving the needed materials from Chinese plants.

Lee Su-bin, an analyst from Daishin Securities, believes that the Japanese government will not go as far as imposing an outright ban on the materials as it could wreak havoc on the global chip and electronics industries.

Another Korean report posted today added that "It’s not known how much and how Samsung will get the three high-tech materials, but sources said it will be enough to prevent operational problems at its production facilities with existing inventories for a while."

Yet it must be said that while Samsung should be able to have the needed components in quantity to cover Apple's next-gen iPhones, none of the reports out of Korea have touched on supplies for foreign customers.

Though just as Samsung's Vice Chair demanded a contingency plan from his executives, Apple is likely doing likewise which could open the door for China's display maker BOE as we reported on July 9th. BOE is the supplier of OLED displays for Huawei and with Huawei smartphone sales to be affected this fall, BOE could be ready to fill any orders Apple requires if the requests are timely made.

A third Korean report is now claiming that Russia has made an open offer to supply Hydrogen Fluoride to South Korean Businesses.

A representative for South Korean Government “Russian Government stated that "When it comes to competitive edge of hydrogen fluoride, Russia is either equal or superior than Japan."

Korea's President Moon and 30 South Korean businesses held a meeting at the Blue House last Wednesday to discuss the need to work with Russia and Germany.

Spokesperson Ko Min-jung of the Blue House during her briefing after the meeting took place stated that "We absolutely need to put in an effort to reduce the dependence on a particular country and there is a need to expand partnerships with Russia and Germany that have an advantage in chemical industry especially."

The move, if ever taken, would represent a major shift. Some industry insiders predict that it won't be easy to change supply line. Korean businesses would need a certain measure of time to test performance of new suppliers and the materials. That would certainly reduce productivity. It is also unclear whether Russian products can completely replace Japanese products as well. But it's an open door for Russia to enter a new major market.

Lastly, Samsung and other Korean chip makers may be playing up the crisis at this time so that they can raise chip prices. Japan-based Nomura Securities Co. stated that “When a massive fire broke out at a SK Hynix production facility in China in the past, the price of Samsung Electronics shares showed a sharp increase." That scenario is likely to be repeated under the current trade battle with Japan.

It's unknown at this time if the Japan-Korea crisis could affect Apple's next-gen idevice schedules this fall and if memory price increases will be a factor. It was reported by Reuters last year that Apple was in talks to buy storage chips from China's Yangtze Memory Technologies – so we know that Apple could shift gears if need be on that front if Samsung overplays their hand.

There's about two months before next-gen iPhones are revealed and we may only know at that time what official delivery dates Apple will announce. That particular revelation will confirm if the iPhone is delayed or affect Apple's financials for fiscal Q1 2020.

If Samsung makes any formal announcements on component delays in the coming weeks that could affect iPhone shipments, we'll report on the matter immediately.