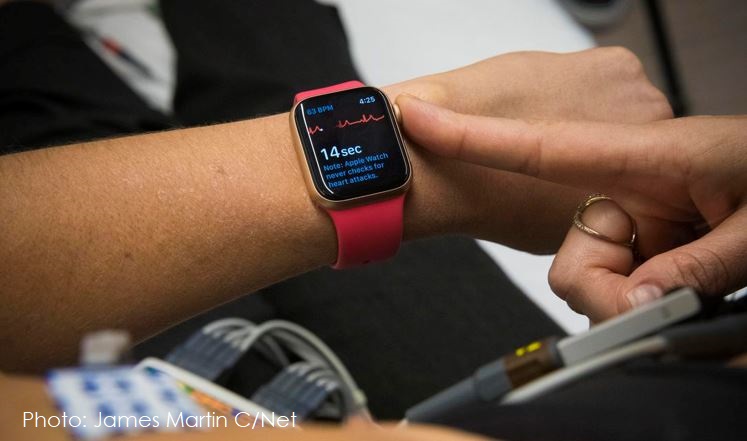 Patently Apple posted a report back in December 2018 titled "Doctor Warns Apple Watch 4 users to be Careful with the new ECG App not always being accurate." Orange County cardiologist Dr. Brian Kolski warned that in the first week of Apple Watch 4 with its electrocardiogram application he had received at least 20 calls and e-mails from panicked patients who thought they were having atrial fibrillation or irregular heartbeat. Almost all of those cases were false alarms or inconclusive, he said.

Fact: only approximately 2% of people younger than age 65 have AFib and it's estimated that only 1% of the population may have undiagnosed AFib. In the latter two groups, AFib episodes are often brief, cause no symptoms and may not require treatment.

Dr. Venkatesh Murthy, professor of preventive cardiology at the University of Michigan, estimates that 90% of irregular rhythm alerts in younger groups are false alarms.

As a result, experts worry that putting Apple's screening technology on the wrists of millions of people who are likely to be young and healthy could increase the risk of overtreatment. Especially when that technology is still so new and based on studies that haven't been published in peer-reviewed journals.

The report lightly criticized Apple's single titanium electrode saying that to "properly diagnose" when someone is in AFib, doctors use 12-lead ECG machines. They use electrodes placed on different parts of the body to evaluate the heart's electrical activity in three directions (right to left, up and down, and front to back), which provides a clearer picture of its movement through the heart's four chambers.

A woman recently wrote to Dr. Pearson, the cardiologist, asking whether the Apple Watch could help detect a future heart attack in her husband, who had already had one at age 36. "The answer is a resounding and unequivocal NO!" Pearson responded via his blog, The Skeptical Cardiologist. For more on this, check out the full C/NET report.