Home Archives Contact Us Subscribe Twitter Facebook Patently Mobile
The Trademark for Jony Ive's new Company Name was filed for in Jamaica in Late May
Bloomberg Plays it Safe, reports that Apple may be able to Sell as many iPhones as Last Year 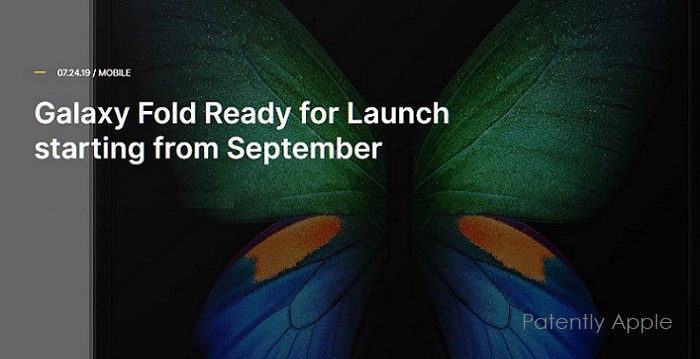 In mid-April Patently Apple posted a report titled "Samsung was hoping for a few days of Great Reviews for their Galaxy Fold when suddenly it all blew up in their Face," followed by a report a week later titled "Samsung Officially Delays the U.S. Launch of the Galaxy Fold for "weeks" until adjustments to the Hinge & Display are made." A "few weeks" has turned into five months when it's set to officially launch in the market. Samsung Global made the official announcement late yesterday. Best Buy and AT&T were wise to cancel pre-orders of the Galaxy Fold back in early June.

Late yesterday Samsung announced that it had taken the time to fully evaluate the product design, make necessary improvements and run rigorous tests to validate the changes we made. These design and construction improvements include:

The top protective layer of the Infinity Flex Display has been extended beyond the bezel, making it apparent that it is an integral part of the display structure and not meant to be removed.

The top and bottom of the hinge area have been strengthened with newly added protection caps.

Additional metal layers underneath the Infinity Flex Display have been included to reinforce the protection of the display.

The space between the hinge and body of Galaxy Fold has been reduced.

Along with these improvements, Samsung has also been continuously working to improve the overall Galaxy Fold user experience, including optimizing more apps and services for its unique foldable UX.

Samsung is conducting final product tests to make Galaxy Fold available to consumers starting from September in select markets. Availability details will be shared as we get closer to the launch.

Samsung's Galaxy Note 10 will be introduced at a New York event on August 7th. Samsung wanted to get the word out about the Galaxy Fold's re-launch time-frame prior to the event so as to not ruin the event with questions about the Fold taking away the focus on the Note 10.