Home Archives Contact Us Subscribe Twitter MeWe Facebook Patently Mobile
Google has removed near 60 apps from China's CooTek & Banned them on AdMob for engaging in malicious ad Practices
Apple may Open a new Office in Vancouver, B.C., Canada where the Apple TV+ Series 'See' is being Filmed

A new Korean tech report claims that Samsung Display is now in talks with South Korea's SKC over the supply of colorless polyimide (CPI) used for foldable smartphones – and the Galaxy Fold specifically. This represents the first time that Korean corporations collaborate to substitute local products for items that are under the Japanese government’s export control.

Samsung Display is on alert over CPI procurement. Industry experts say Samsung Display has two- to three-month CPI inventory. However, as Japan’s export restrictions are highly likely to be extended, there is the possibility of Samsung’s foldable phone production being disrupted by an unstable CPI supply.

However, Samsung Display reportedly contacted SKC to ask if it can supply CPI as the Japanese government’s export regulations that started on July 4 could disrupt its material procurement.

An SKC official stated for the report that "We have opened everything about CPI mass production to Samsung Display.  We are not yet in a product test stage, but we expect Samsung to reach a deal with SKC as Japan's regulations could be further strengthened." 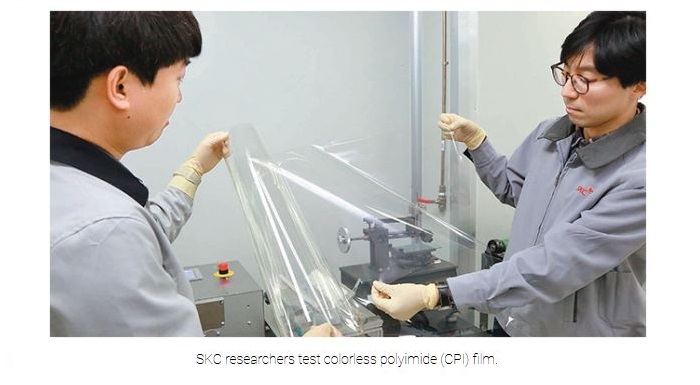 Samsung Display is trying to secure an alternative supply source through SKC, which is scheduled to start volume production of CPI in October.

It's unknown at this time if the Galaxy Fold delay in returning to market is caused by the uncertainty in having a constant supply of colorless polyimide film.

Earlier today Patently Apple posted a report titled "Apple, Amazon and Google Executives Visit Samsung to assess the Potential Crisis in Smartphone Supply Shortage." Beyond tech companies, the U.S. Assistant Secretary of State for East Asian and Pacific Affairs David Stilwell has stated that the U.S. government may have to intervene in the ongoing economic disputes between South Korea and Japan.