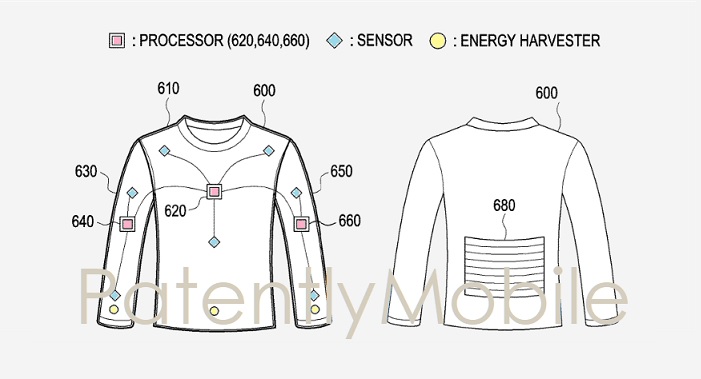 Earlier today Patently Apple posted a report about one of Apple's granted patents issued by the U.S. Patent Office about future smart apparel which could be one of the next products to emerge under the wearables category that Apple currently leads in with AirPods and Apple Watch. But Apple isn't alone on this front as Samsung's second patent application for smart clothing emerged back in Q2 2019. In Samsung's patent application, smartwear is specifically considered to be "Smart Clothes" wherein an item of clothing is combined with an electronic device as their patent graphic above proves out.

Considering that the focus of the patent is about harvesting energy to keep the electronics interweaved in the smart clothing active, Samsung only provides a sweeping view of what could be powered and nothing specifically.

Technically speaking, smart clothing could also simply act as a power source for accessories like smart glasses or even your smartphone. As an example, a simple hike or jog in the park could create enough power through the energy harvester to power a device like your smartphone.

Samsung's patent FIGS. 6A and 6B below cover clothing items such as a jersey that includes a plurality of energy harvesters, a plurality of processors (#620, 640 and #660), a plurality of sensors, and a battery (#680). The electronic device #600 (an item of smart clothing) may further include wires that interconnect the components. 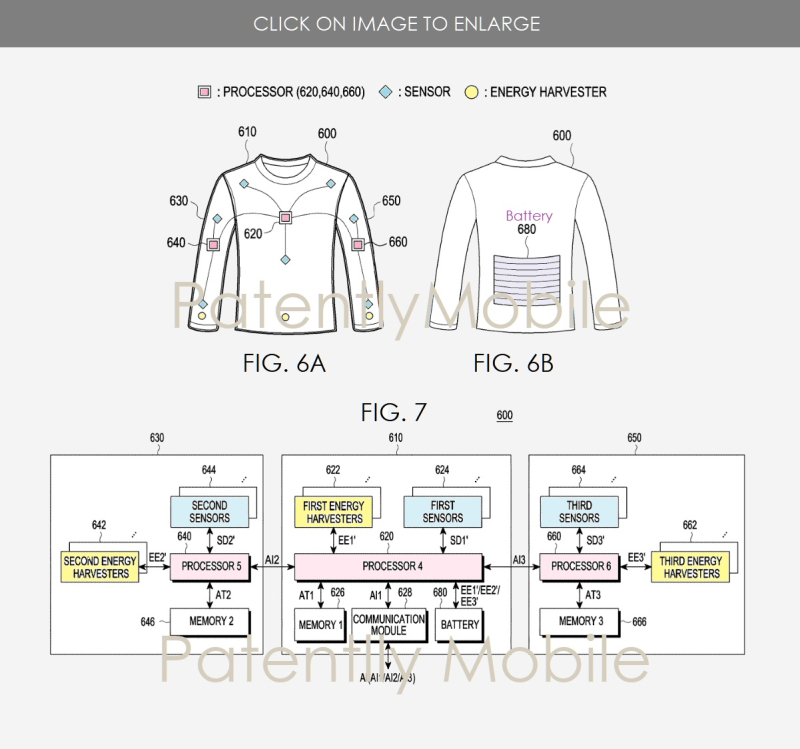 Samsung's patent FIG. 7 illustrates the electronic device (#600) which may include the first area 610, the second area 630, and the third area 650 as sub-divided above.

Samsung's Patent FIGS. 13a/b/c below illustrates data flows for a method of operating an electronic device. If a motion is made, the plurality of energy harvesters may generate electrical energy under the control of the first processor. 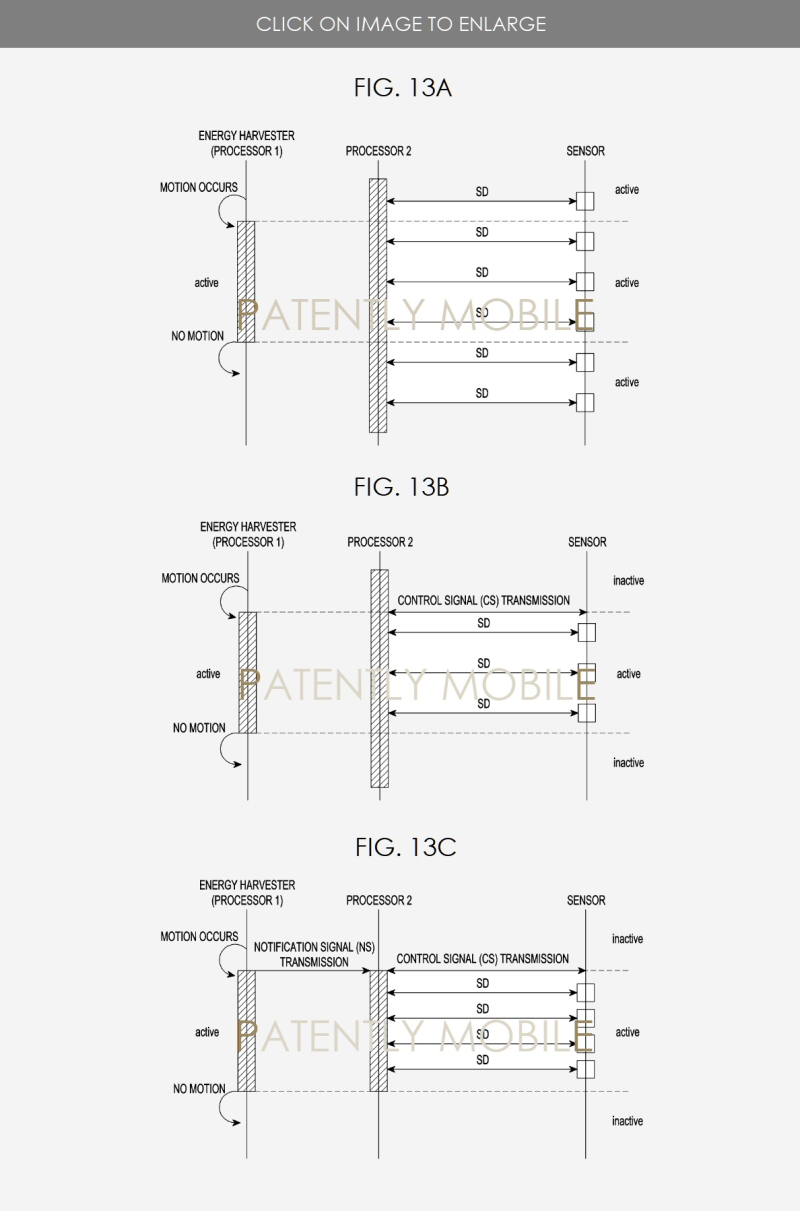 Where does the energy come from? It comes from a user's motion that equates to users performing activities. Samsung's patent FIGS. 11 and 12 below illustrate activity tables. The first activities may include the states of stationary, walking, and running and the second activities include sports, fitness and vehicle. 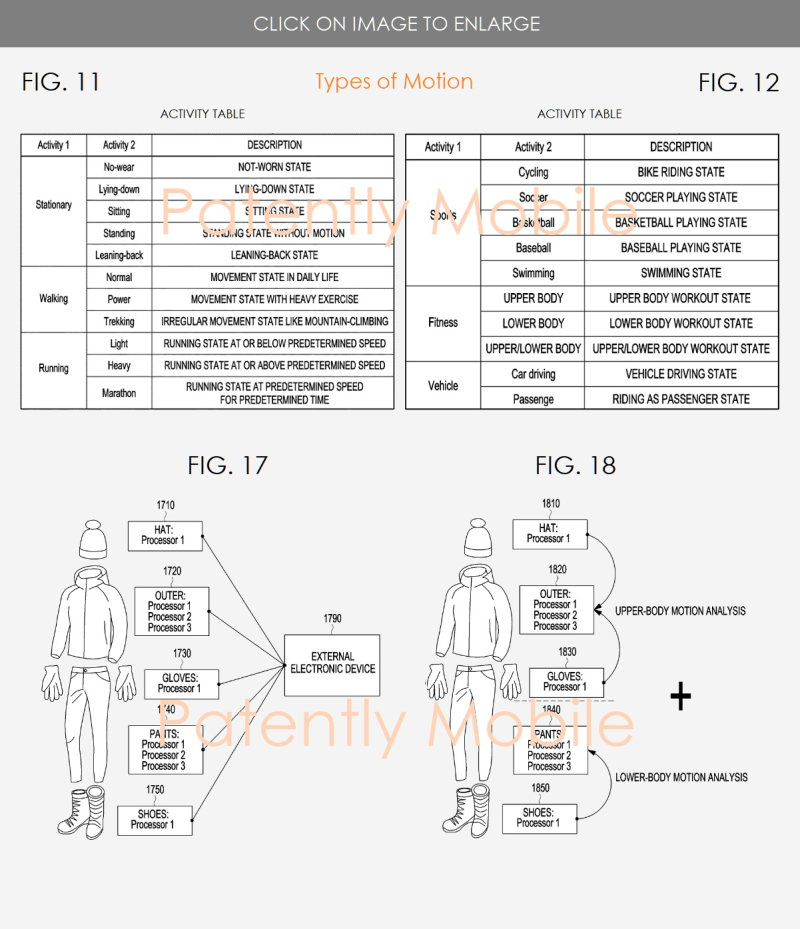 In Samsung's patent FIGS. 17 and 18 above we're able to see how a plurality of processors can control various parts of apparel such as hat, jacket or sweater, pants, gloves and shoes.