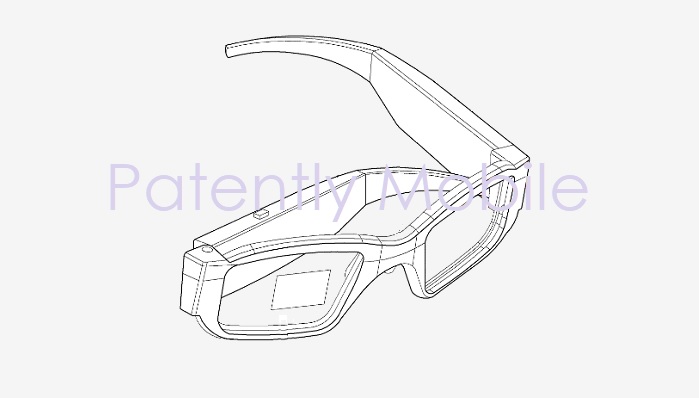 This month the US Patent & Trademark Office published a patent application from Samsung relating to their first attempt at AR smartglasses. Back in March, Huawei launched new smartphones in Paris and more importantly announced their first generation smartglasses were coming this summer. 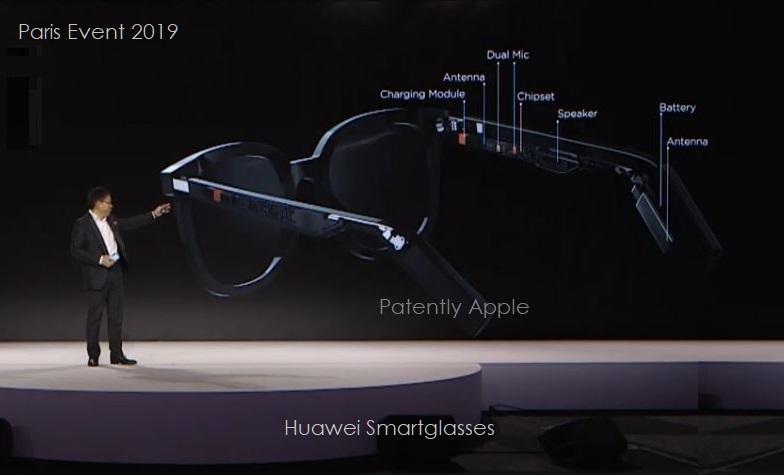 Samsung notes in their patent filing that one of their key chips used in their AR smartglasses is an ARM processor. If that's the case with Huawei, their smartglasses could be in jeopardy being that ARM has suspended all business with them back in May.

However, Huawei may be able to work around that problem considering that they've partnered with Gentle Monster in creating the glasses. If lucky, Gentle Monster may not be on the U.S. Blacklist of Huawei suppliers.

In describing their smartglasses invention, Samsung notes that one or more embodiments of the present invention relates to foldable smartglasses wherein the temple portion of the wearable device may include a projector and a prism, and the temple portion may be constructed to be foldable with respect to the frame of the device, thereby allowing the device to be easily being stored.

The folding-styled smartglasses are designed for easy repairs by being able to replace the temple portion of glasses.

Below you'll see Samsung's main patent figures illustrating the basic design of the smartglasses. Considering that it's not a design patent, the design could materially change when going to market. As a utility patent, Samsung is simply illustrating the key parts of the glasses. Samsung's patent FIG. 5 above illustrates the optical path of an optical signal emitted from the projector #150 may be changed primarily via the optical transferring member #152, and may be guided to be incident on the first optical reflection member #154.

Samsung's patent FIG. 6 above is a perspective view illustrating structures of a fixing device and a folding/unfolding recognition device.

Could Apple be in the AR Smartglasses Race?

The simple answer to that question is: certainly.

Since January Patently Apple has covered three AR Smartglasses (01, 02, 03) that primarily stemmed back to the original patent Apple acquired from Metaio in June 2015. The patents covered extensions/continuations made by Apple's engineers to the original Metaio patent.

Then in April their first original smartglasses patent surfaced that was written by Apple engineers for smartglasses with a biomedical twist. The invention covered both smartglasses and Head Mounted Display device.

Our archives show that Apple has more patents about a Mixed Reality headset than they do AR Smartglasses – so it's difficult to assess which of the two projects has priority with Apple's product roadmap.

With that said, DigiTimes officially posted a report today titled "Apple reportedly suspends development of AR/VR headsets." The link may only last a week and then disappear, so below is a graphic of where the link leads you to in-part.

As you know, Apple abandoned their AirPower wireless charging mat recently that all Apple news sites were led to believe was just around the corner. Apple even presented it in a keynote presentation. So it's not impossible for yet another project of Apple's to be cancelled.

Yet it must be said that DigiTimes only recently decided to put their big headline reports behind a paywall. In order to drum up business and interest to motivate readers to signup for a subscription, they have to create big knock-out story headlines to create demand. So on that basis, the headline noted above is suspect of being click bait.

Unfortunately many in the tech media jumped on this rumor with only a headline to go by.  Is that not Fake News at its finest? Reporting on a single byline as proof enough to make this rumor feasible?

There are a number of scenarios that could be spun, but for now Patently Apple won't go along with the DigiTimes rumor until more evidence is made available.

At the end of the day, Apple is still one of the top smartphone players looking at delivering a smartglasses product or accessory to market at some point in the future.