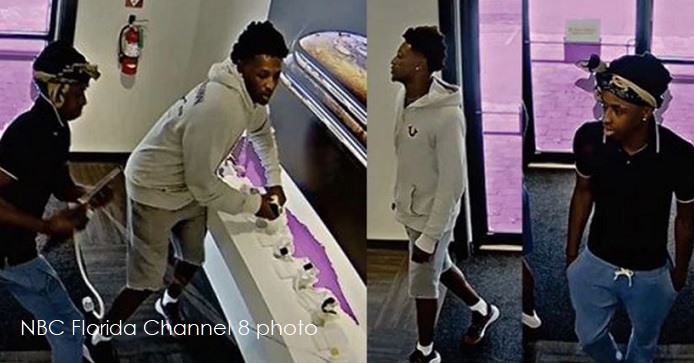 According to an NBC report from their Florida News Channel 8, deputies are hoping local viewership in the Tampa area will be able to recognize four suspects (in our cover graphic) who stole nearly a dozen Apple devices from a Sprint store. The robbery took place last Monday but was only made by the NBC station yesterday.

According to Hillsborough deputies, around 2 p.m. on Monday, four men entered a Sprint store located at 6708 Memorial Highway in Tampa. They removed the security devices from seven phones and two Apple smartwatches before leaving the store.

The report notes that "The suspects are described as black men in their 20s. One of the suspects was about 5 feet 9 inches tall, weighs 160 pounds and had long hair. He was seen wearing a gray hoodie and light-colored denim shorts."

If any Tampa resident knows who these suspects are to call the Hillsborough County Sheriff’s Office at 813-247-8200.