Back on May 1, The New York Times wrote an interest article titled "Huawei’s Communist Culture Limits its Global Ambitions." The report showed Huawei's deep roots in the communist party. In a book that Huawei's CEO Ren Zhengfei wrote he penned: "What’s wrong with striving? We learned this from the Communist Party. We’ll strive for the realization of communism until the end of our lives."

The ties that the CEO of Huawei has with the communist party concerns the U.S. in terms of Huawei communication equipment being able to assist Chinese hacker groups steal U.S. IP for the Chinese Government.

This  image is what Huawei's CEO is trying change with his many interviews with western media outlets. He likes praising Apple as his tool of choice at trying to pull on the heartstrings of U.S. consumers.

Huawei's CEO played up us his praise for Apple's co-founder Steve Jobs for creating the mobile internet era back in mid-April. He's now back in the press praising Apple's stance on user privacy as a means of trying to erase the image of his ties with communist party. What better way than to use protecting user data from the Chinese Government?

CNBC pointed out in a report today that in an interview with Financial Times, Huawei's CEO stated that Apple is his role model in a scenario where the Chinese government requests the company to unlock its devices which might go against the users' interests.

Zhengfei stressed that his company will not provide users' data to the Chinese government at any cost, the way Apple does not provide data that may compromise its users' privacy.

The US government has banned Huawei from operating in the U.S. in the interest of national security, claiming that Huawei is working hand in glove with the Chinese government.

Zhengfei, as always, argues that's not the case. CNBC quotes Zhengfei from the Financial Times report saying: "Data is owned by our customers, not us. Carriers have to track every user, otherwise no phone calls could be made. It's a carrier's duty to track user data. We, as an equipment provider, don't track any data." You could read more of the CNBC report here.

Huawei's CEO may like Apple but if you've spent time watching Huawei presentations, you know that they mock Apple at every turn possible. So throwing Apple a bone isn't anything that should impress anyone. The bigger issue with Huawei is far beyond Apple.

Earlier today the Financial Times (FT) dug a little deeper in a secondary report titled "Huawei CVs show close links with military, study says. The findings are fuel for the debate over whether Huawei's 5G networks pose a security risk."

FT notes in their secondary report that "a study of the employment information of thousands of Huawei staff has revealed deeper links with the Chinese military and intelligence apparatus than those previously acknowledged by China’s biggest telecom equipment maker.

The findings are likely to add fuel to the debate among governments around the world over whether to block Huawei’s gear from the rollout of 5G telecoms networks for security reasons.

The research was conducted by Christopher Balding, a professor at Fulbright University Vietnam, and researchers at the Henry Jackson Society, a UK think-tank. Trawling through a database of leaked Chinese CVs, they found Huawei employees who appeared to be simultaneously employed by institutions affiliated with the Chinese military, others who previously worked in areas related to hacking or telecom monitoring, and still more who described their work at Huawei as linked to the Ministry of State Security (MSS), an entity involved in cyber warfare and network penetration.

Prof Balding identified one Huawei employee who describes himself as a 'representative' of the MSS at Huawei and claims to have worked on 'building lawful interception capability into Huawei equipment.'

The researchers suggest that this employee could have been involved in the alleged installation of backdoors — clandestine access points that could allow eavesdropping on sensitive communications — in a Vodafone network in Italy a decade ago that was first reported earlier this year."

The report later noted that Vodafone and Huawei argued that any security issue that caused a security breach was fixed a long time ago.

The FT report added that "Elsa Kania, an expert on Chinese military innovation in emerging technologies and military-civil fusion in China — the practice in the country of close cooperation between the military and civilian entities on technology, called Mr Balding’s paper a very valuable contribution, though inconclusive in some respects.

The research is likely to further stir the debate over Huawei as US government officials wrangle with industry after Washington blacklisted Huawei earlier this year. Decisions are also looming in several EU member countries, including the UK, on how to mitigate the security risks in 5G networks.

Professor Balding went on to say that 'Huawei has gone to great lengths saying they have no links with the Chinese military and security institutions. The narrative they spin is false — military connections quite clearly run deep.'"

The Financial Times report is very interesting and you could read more of it here. 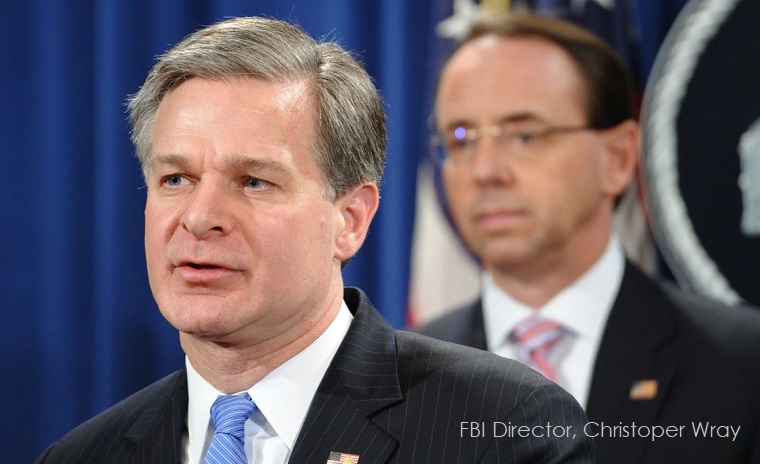 Back in late December, two Chinese men were charged in a massive, years-long hacking campaign that stole personal and proprietary information from companies around the world, the FBI and the Justice Department announced at a press conference in Washington, D.C.

The men, Zhu Hua and Zhang Shilong, are part of a group known as Advanced Persistent Threat 10, or APT 10, a hacking group associated with the Chinese government.

According to the indictment, from around 2006 to 2018, APT 10 conducted extensive hacking campaigns, stealing information from more than 45 victim organizations, including American companies. Hundreds of gigabytes of sensitive data were secretly taken from companies in a diverse range of industries, such as health care, biotechnology, finance, manufacturing, and oil and gas.

At the time, the FBI Director Christopher Wray described the list of companies, not named in the indictment, as a "Who’s Who" of the global economy. Even government agencies like NASA and the Department of Energy were among the victims. The hack was a part of China’s ongoing efforts to steal intellectual property from other countries.

Shortly afterwards Bloomberg reported on the FBI setting up a sting at CES 2019 and the target was Huawei. A series of events and evidence triggered the U.S. Governement's current blacklist of Huawei to be a part of the U.S. communications infrastructure.

Then on Jan. 28, federal prosecutors in Brooklyn charged the company and its chief financial officer, Meng Wanzhou, with multiple counts of fraud and conspiracy.

Backing up a bit, Wanzhou was arrested in Vancouver Canada on December 01, 2018. For Canada it was an extradition case. Yet for assisting the U.S. in this matter, the Chinese Government has been raising the pain on Canada by severely cutting back on importing products like canola seeds, beef and pork products, oil and more and it's really beginning to hurt the Canadian economy.

Why would China be that harsh against Canada for their small role in holding Huawei's executive unless there was more to this story that meets the eye. This story just continues to get larger over time and Huawei is at the center of it all.

At the end of the day and in context, Huawei's CEO praising Apple for their stance on privacy is really just a tool in the CEO's toolbox in an attempt to deny that his company is working with various security institutions in China.

Of course others will disagree simply because Huawei's CEO praised Apple's stance on privacy, even if it's a little short sighted. The debate over Huawei's connection to Chinese government hackers will continue for months and possibly years before it's resolved or if it ever gets resolved.

Although it's not a Huawei story, it's sill a story about China stealing U.S. IP technology. It was reported last week that a California Federal Court convicted UCLA professor Yi-Chi Shih for stealing and sending missile guidance chip technology to China.