Apple's iPhone XR was the best Selling Smartphone in the U.S. in Q2 with a Whopping 48% Market Share 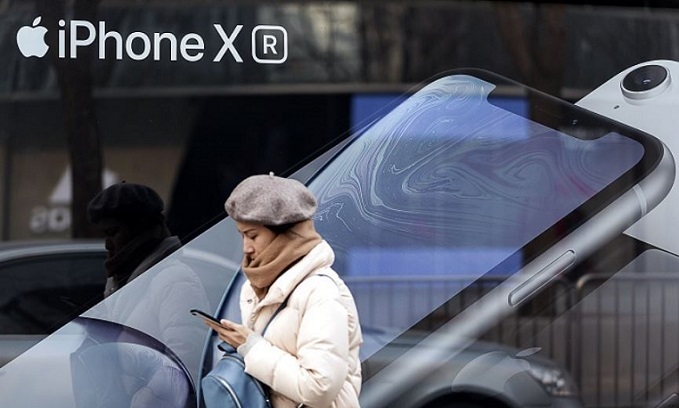 On July 19 Patently Apple posted a report titled "In Q2, Apple's Latest iPhones Dominated the top 3 Spots in the U.S. while gaining iOS market share in Urban China." The report provided a simple overview of the U.S. market. Today, Consumer Intelligence Research Partners, LLC (CIRP), released their analysis of the results from its research on Apple, Inc. for the fiscal quarter that ended June 29, 2019 in more detail. 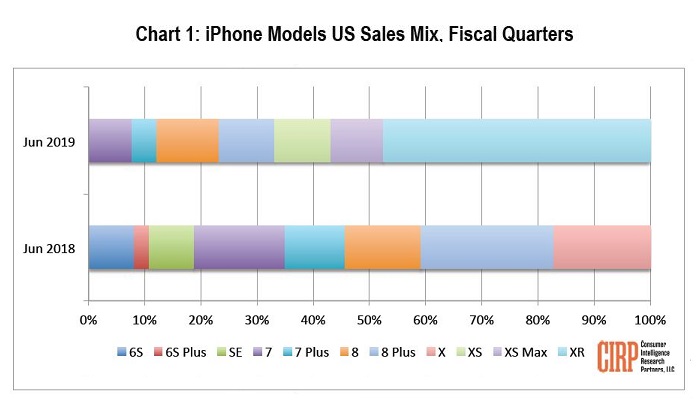 Josh Lowitz, CIRP Partner and Co-Founder: "iPhone XR has become the dominant iPhone model. Its 48% share of sales in the quarter is the highest we’ve seen for an individual model since the iPhone 6 in 2015, which shared top billing with the 6 Plus, but only had two outdated legacy models offered as alternatives.

Apple set out to create a competitive model, with current features like a large screen on a midsize handset, at a price that falls near the leading Android phones. It is an easy to choose the mid-point between the expensive XS and XS Max models, and the older 7 and 8 models."

Apple services penetration in the US market still varies considerably. Among US iPhone buyers in the quarter, 47% use paid iCloud storage, while 3-6% purchase an AppleCare warranty. 35% of iPhone buyers use the Apple Music streaming service, and 15-29% use the app-based Apple TV, Apple Podcasts, and Apple News (Chart 2). 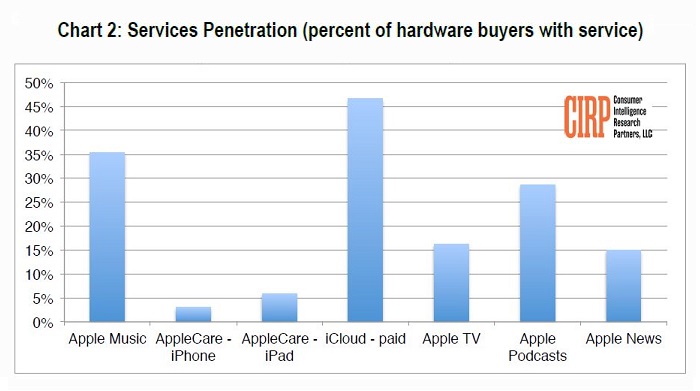 “Success in services has varied, depending on the competition and how much of a head-start Apple has,” said Mike Levin, CIRP Partner and Co-Founder. “For example, for a long time Apple had one of the only apps for podcasts, so its podcast app has the highest penetration for iPhone buyers. In contrast, Apple TV competes against Netflix and other streaming video services, and has lower penetration. Even though Apple has offered extended warranties for many years, mobile carriers and retailers like Best Buy offer their own and third-party warranties, so AppleCare has a much lower penetration. After Apple discontinued iTunes, Apple Music is its unified music service, yet its 35% share still puts it behind Spotify and Pandora.”