In and around 2012, Samsung introduced the Galaxy Beam smartphone that introduced a pico projector. While the idea was interesting, it never found applications and more importantly a market for the device. Samsung is now thinking of resurrecting the idea but as a mobile projector accessory for Galaxy smartphones and other computers.

Earlier in June the US Patent & Trademark Office published a granted patent from Samsung relating to a new kind of portable projector that could sit on a table, like our cover graphic illustrates, or be easily attached to a wall to show slides, pictures, videos or simply watch live TV. The projection system could be controlled by a smartphone or any other kind of computer such as a tablet, laptop, desktop, wearable device like a smartwatch or even a set-top-box.

Both our cover graphic which represents Samsung's FIG. 1A and the first images below in FIG. 1B are reference diagrams showing an exemplary electronic projection device. 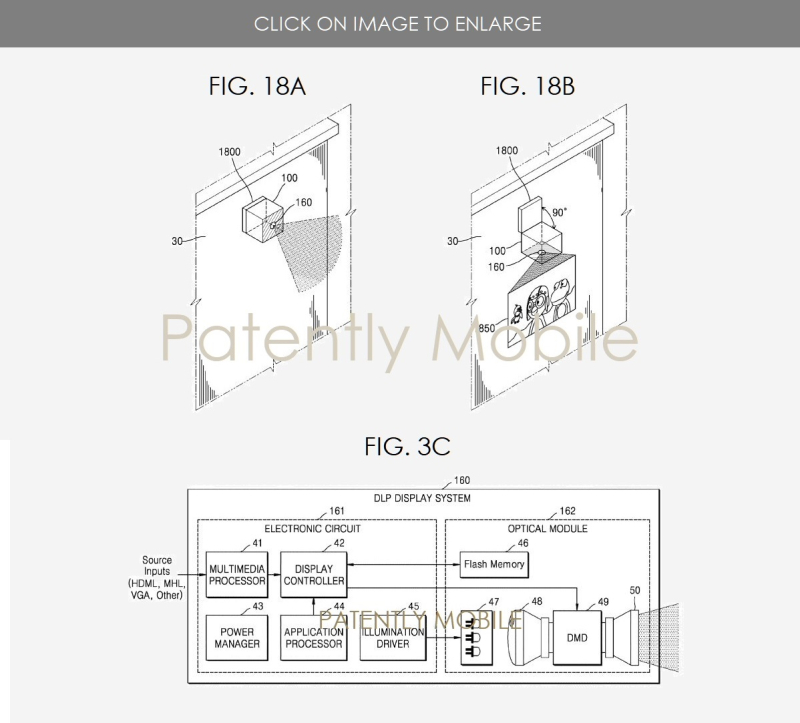 Samsung's patent FIGS. 18A and 18B re diagrams showing an exemplary relationship between an electronic device and an attachment member; FIG. 3C shows an exemplary projection module that utilizes a digital light processing (DLP) system.

For more on this, read the full Patently Mobile report here.