Prior to the Trump-Xi G20 Meeting on Trade, the U.S. Blacklists Five new Chinese companies on National Security Concerns 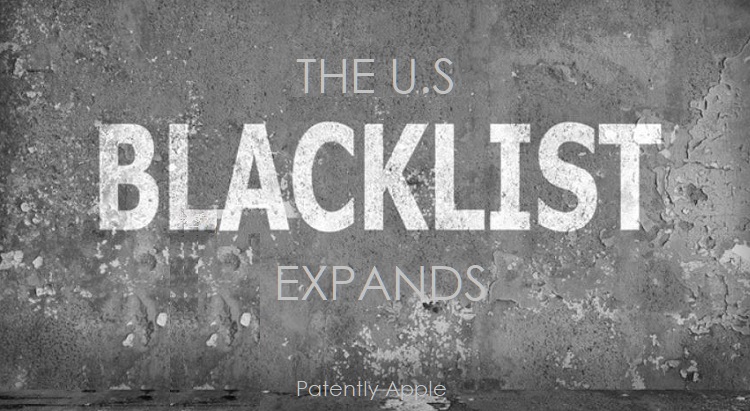 On Thursday Patently Apple posted a report that included Apple's full letter to U.S. Trade Representative the Honorable Robert Lighthizer wherein they noted their opposition to the possible next round of tariffs on China that would directly hit the technology sector and specifically Apple hardware including their next-gen iPhones that would have a huge impact of Apple's revenues.

Tensions are rising prior to the meeting between U.S. President Trump and China's President Xi at the G20 Osaka Summit starting next Friday June 28. The US and China were on the verge of a historic trade deal with China when they back-tracked from provisions protecting U.S. Intellectual Property into law. Protecting U.S. Intellectual Property is important to all U.S. companies in the long run, even though many U.S. companies are upset about possible new tariffs in the short run.

The U.S. hit China with the first round of tariffs and published a blacklist of 67 Huawei Affiliates banned from access to U.S. suppliers. Other developments against Huawei were covered in one of our recent reports titled "Ostracizing Huawei."

Prior to the G20 meeting next week between President Trump and President Xi on trade, you would think that the U.S. would want to stay relatively quiet to calm things down. Instead, the New York Times is reporting that the U.S. has expanded their blacklist with five more Chinese tech firms over national security concerns.

The NYTimes reports that "The Trump administration added five Chinese entities to a United States blacklist on Friday, further restricting China’s access to American technology and stoking already high tensions before a planned meeting between President Trump and President Xi Jinping of China in Japan next week.

The Commerce Department announced that it would add four Chinese companies and one Chinese institute to an "entity list," saying they posed risks to American national security or foreign policy interests. The move essentially bars them from buying American technology and components without a waiver from the United States government, which could all but cripple them because of their reliance on American chips and other technology to make advanced electronics.

These companies lead China’s development of high-performance computing, some of which is used in military applications like simulating nuclear explosions, the Commerce Department said.

In its current order, the Commerce Department highlights the next frontier in supercomputing: 'exascale' machines, which China, the United States and other nations are racing to build. They will be five times as fast as the fastest machine today — the Summit, which is housed at Oak Ridge and was built by IBM in a partnership with Nvidia.

In most cases, the computers rely on a mix of microchips from the American manufacturers Intel and Nvidia. By placing Sugon on the list, the Trump administration is effectively cutting it off from the tiny brains it needs to make the billions of calculations required to model weather patterns and support video apps and online shopping.

One of the blacklisted subsidiaries had formed a partnership with the American chip maker Advanced Micro Devices to create microchips that could satisfy security demands for Chinese government customers.

The restriction of additional companies could further complicate efforts to reach a trade deal. William Reinsch, a former United States trade official stated that "It’s ill timed. It clearly will be received negatively by the Chinese." For more on this, read the full New York Times report here.

In late May Patently Apple posted a report titled "China's Commerce Ministry Announces that it is set to Retaliate against the U.S. Huawei Affiliates Blacklist." Their list has yet to be made public – but could be triggered in the coming weeks if no progress is reached on trade by next weekend.

Tech firms and their respective CEO's will be glued to developments that could emerge from the trade talks next week in Osaka. If the trade tide turns negative and new tariffs are announced, Apple's next-gen iPhone pricing could be severely impacted. Apple has warned the U.S. administration that if Apple is affected by new tariffs, their $350 billion investment in the U.S. could be scaled back.