No Matter how Analysts Twist the Truth, Apple Remains the Indisputable King of Premium Smartphones 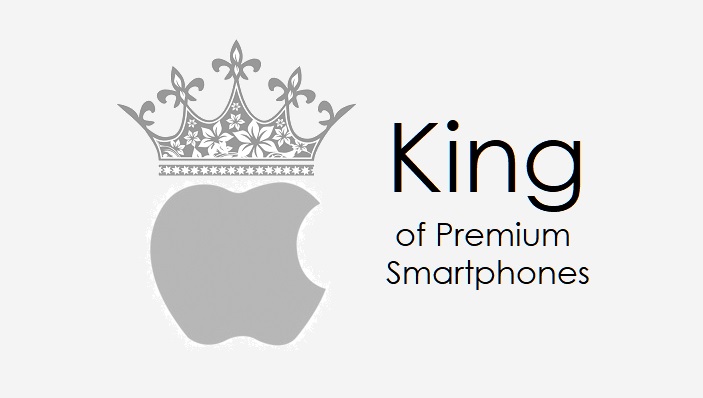 In a recent Counterpoint report they begin by noting that Huawei overtook apple as the second largest smartphone brand globally. Yet we know that such a title is absolutely meaningless to anyone other than a statistician focused on a single criteria of "shipments." In May we pointed out that Huawei rose to the number two spot because close to 50% of their business is now selling into the near-profitless under $200 phone market segment. So while on paper Huawei can pull the wool over the media's eyes by claiming that they're the second largest phone maker in the world, it's not based on profits, where Apple is number one, it's based solely on units shipped. By jamming their stats with quick and easy under $200 phone sales they magically earned to be praised at the number two smartphone player in the world overcoming Apple. It's an empty victory.

All of Apple's new smartphones easily sell for over the $800 mark. In this category, Apple crushes Huawei, even in China as the chart below indicates. While the U.S.-China trade war could change this over time, in Q1 2019 Apple was the absolute king of top tier premium phones in China. 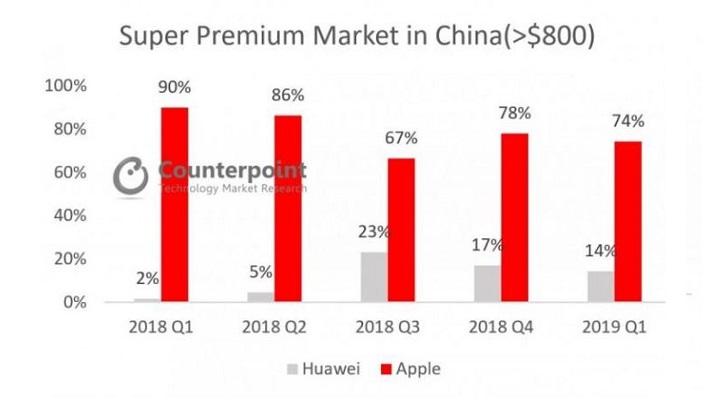 Where Huawei is reportedly making headway against Apple, beyond the rock bottom market of $200 phones,+ is in the mid-range market considered as phones in the $500-799 (according to Counterpoint's chart found in May's report linked to above). 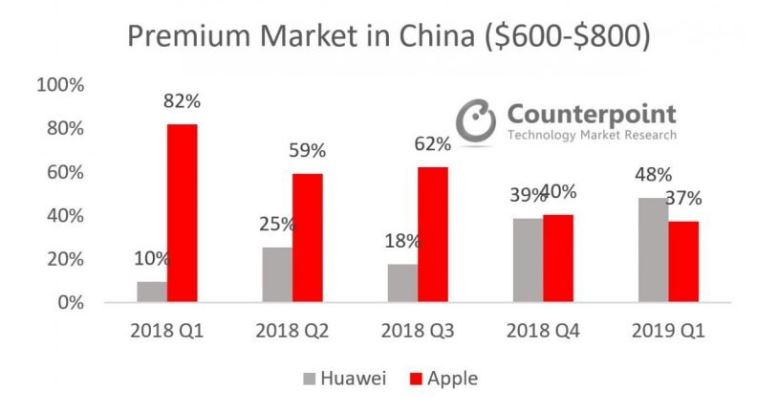 Another example of Counterpoint's bias against Apple was found in their June 17th report about "global premium smartphone shipments for Q1 2019." Although their report's chart showed that Apple was the clear leader in the premium space and clobbering Huawei 3 to 1, this is what the Counterpoint analyst stated about Huawei: "Huawei also captured a double-digit share in the highly concentrated premium market. Impeccable camera quality, AI technology, and superior build quality of its flagship mate and P series drove the growth for Huawei during the quarter.

Being that Apple's premium iPhone sales beat Samsung, Huawei and OnePlus combined, there was no mention of the iPhone's "superior build quality" or anything of the like. It was all negative news like "Apple’s declining shipments has pulled down the global smartphone premium segment." Isn't there anything good to say about the leading premium smartphone? According to Counterpoint, no.

No matter how Counterpoint tries to spin it, Apple is the premium smartphone leader. It's Counterpoint that decided to create a new category of "Super Premium" alongside just "Premium" to give Huawei an advantage in one premium segment. In reality their "Premium" status is really considered a "mid-market" category. By changing the category title to suit their reporting, they can push their propaganda by claiming that Huawei is now the new leader in the "Premium" space, finally edging out Apple as their chart was designed to fool the public with.

By using Counterpoint's own chart (below) found in our May 29th report, Huawei only held 10% of the >500 market. By maniacally over-emphasizing this tiny-tiny segment in a new chart, it looks like Huawei is the real winner in the "Premium" market which sounds powerful – when it's not. 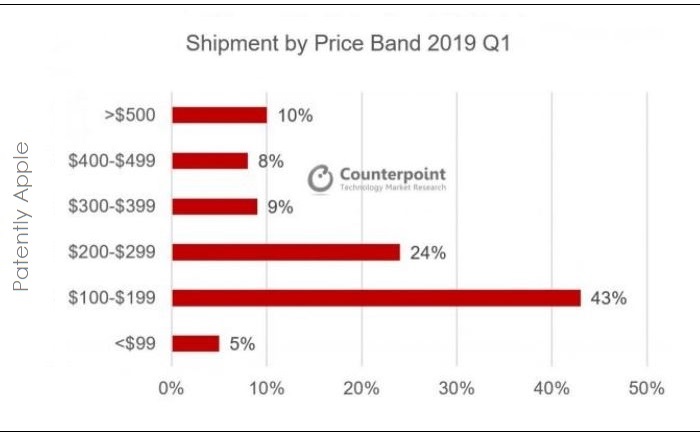 Counterpoint's self-created category is designed to fool consumers into believing that finally Huawei is the real premium smartphone market champ against Apple. To Counterpoint there is no mid market anymore. It's Premium and Super Premium. How convenient is that?

That's what Counterpoint's propaganda is about. Reinventing reality so as to produce the outcome that they've engineered to be able to claim indirectly that Apple is a falling star and Huawei is the new king of Premium smartphones. In reality, in the tiny mid-market, Huawei barely edged out Apple and didn't even come close to touching Apple in the real Premium smartphone space.

Some of Counterpoint's analysts are using spin and pure propaganda of late to feed their bias against Apple plain and simple. When they don't play with their statistics like we've shown that they've done in their recent report, Counterpoint charts are generally dependable for market overviews.