Earlier this month the US Patent & Trademark Office published a patent application from Microsoft that relates to a flexible hinge system designed for folding a large single flexible display very much like Samsung's Galaxy Fold.

Microsoft has a few patents on future folding devices, like this one, that described two display panels with a hinge in the center. Other designs, like the one today focuses on the more modern flexible display form factor like the ones from Huawei and Samsung.

One of the major problems with the Galaxy Fold, that they're still trying to iron out to this day, centers on the hinge area that allowed debris to enter the hinge area. Microsoft's patent covers a new design specifically created for a single large flexible display with a different take from the Samsung version. 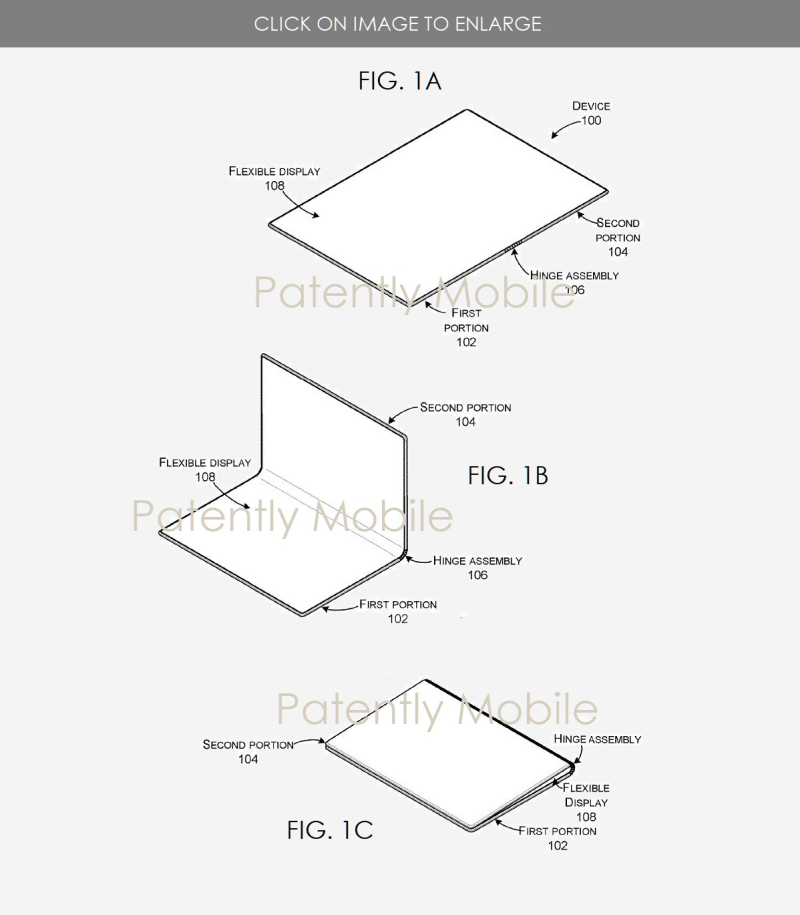 The deployed orientation of FIG. 1A can provide the user with a relatively large display area while the storage orientation can provide a smaller device footprint while protecting the flexible display from damage.

The device is shown in a manner to emphasize the flexible display and the hinge assembly. However, the device may include other components. For instance, in one case, the first and second portions can be manifest as housings. Electronic components, such as processors and/or storage, may be positioned on and/or in the housing and may be interconnected by conductors extending between the two portions and/or to the flexible display.

Microsoft's patent FIG. 2 below shows us the device in an open orientation with a region of the flexible display removed to reveal underlying components that are enlarged in FIG. 3A. 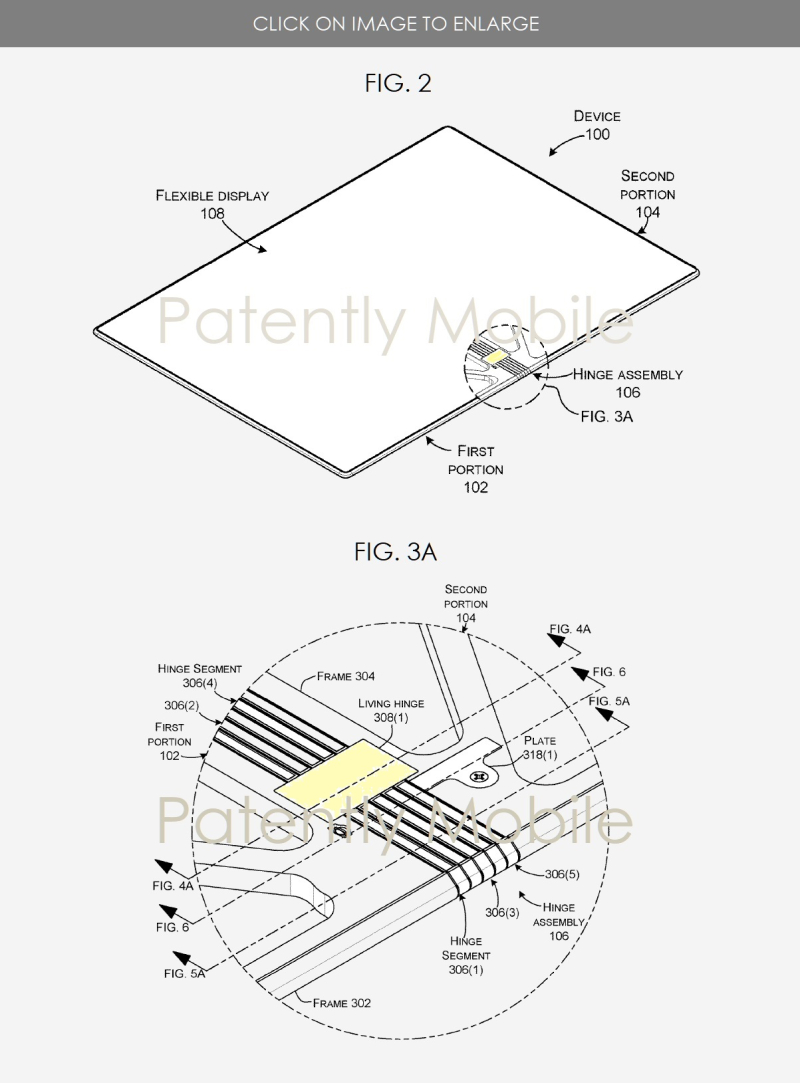 Microsoft's patent FIG. 7 below shows the hinge assembly in a 90-degree orientation. 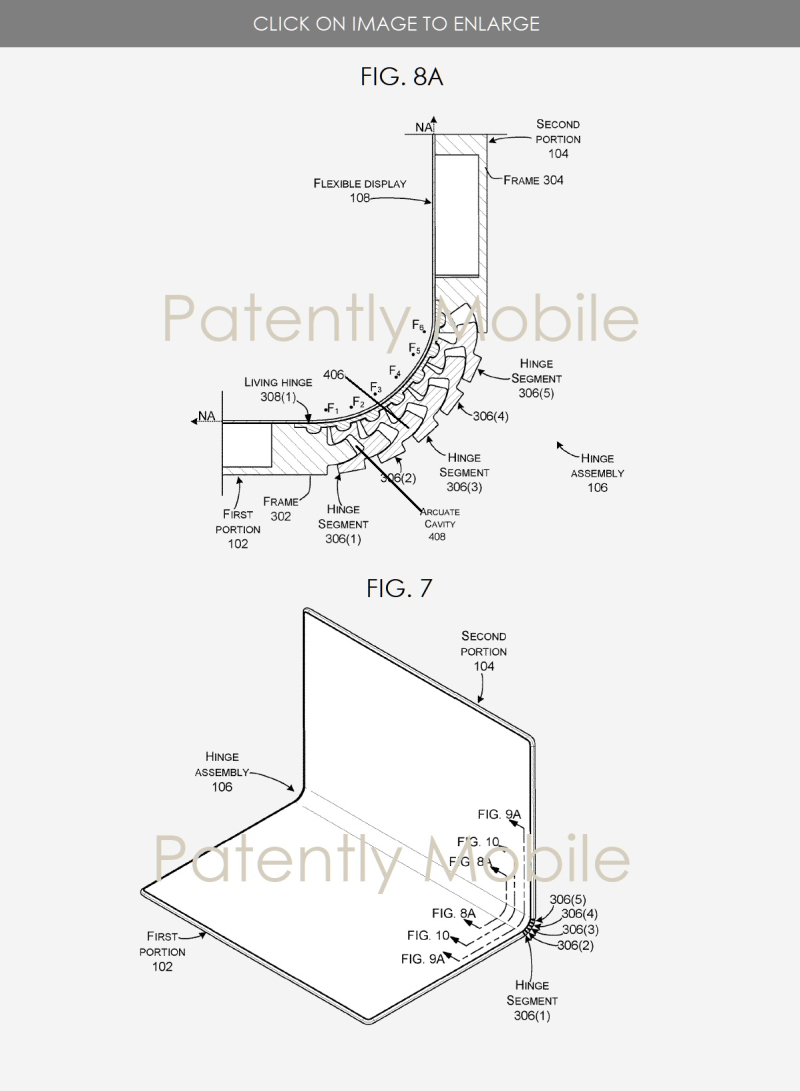 In Microsoft's detailed patent FIG. 8A the hinge segments (#306) are rotating relative to their foci (F.sub.1-F.sub.6). More specifically, arcuate tabs (#406) are traveling in adjacent arcuate cavities (#408).

Last Monday Bill Gates admitted that Microsoft's greatest mistake ever was allowing Android to beat them as the non-Apple Phone Platform. It's a mistake that Microsoft attempted to remedy over the years but never quite got their phone platform established, even after acquiring Nokia. It was a costly endeavor that failed miserably under Steve Ballmer.

Last year Microsoft's VP of Hardware Panos Panay made it clear in an interview with Lauren Goode, a reporter for Wired, that a 'Surface Phone' wasn't on their Roadmap.  Lauren Goode didn't buy it. Even in this recent Microsoft patent filing a smartphone is listed as one of the optional devices. Technically speaking, Microsoft could be designing a foldable device or devices that will be able to access the internet and yet not be considered a phone. Adding telephony could simply be an option for users.

Going full circle, it's an established fact that Intel is working on Project Athena that will begin to roll out in Q4 2019 and ramp up. This is all about foldable devices like the 2020 foldable that's getting a lot of buzz from Lenovo.  We also covered the possibility that Apple could eventually challenge the Lenovo device with a special edition foldable iPad Pro. It may be here where Microsoft actually makes an attempt to challenge the smartphone platform with a new kind of platform designed for large foldable devices that will need a powerful new OS that could support split screen applications for enterprise multitaskers while supporting the Xbox streaming service and more.

Microsoft and Intel have been working on this project for some time now and it sounds like Dell, HP, Lenovo, Asus and others will be onboard to push these next-gen foldable devices in volume. By quickly establishing a new platform and having traditional Wintel distributors onboard, the biggest mistake in Microsoft's history may be overturned if they can get ahead of Android in this new category.

At the end of the day, while it's only one of a few Microsoft patents on hinges for a foldable device, in the bigger picture it represents Microsoft's dream of having a winning mobile platform that has a chance of challenging iOS and Android.

A lot of Microsoft's patents like this latest one are registered to "Microsoft Technology Licensing.' So the patent-pending hinge could be used by Microsoft and/or licensed to any of Wintel's partners.

A Note for Tech Sites covering our Report: We ask tech sites covering our report to kindly limit the use of our graphics to one group of images. Thanking you in advance for your cooperation.