Jony Ive begins his Exit from Apple, with his new Venture 'LoveFrom' Officially Kicking off in 2020 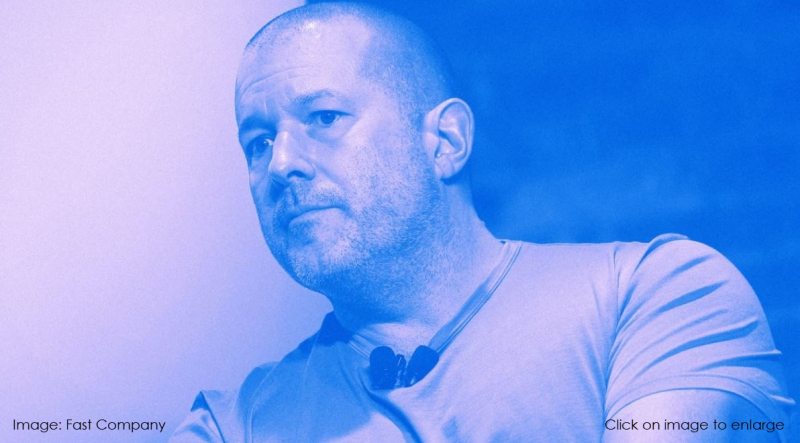 It is the end of an era at Apple. Jony Ive will leave the company later this year to start a new venture of his own, called LoveFrom — with Apple as his first client.

The transition will begin later this year, with LoveFrom launching fully in 2020. Ive told the Financial Times in an exclusive interview that "While I will not be an [Apple] employee, I will still be very involved — I hope for many, many years to come. "This just seems like a natural and gentle time to make this change."

While Ive is leaving, some of his comments continued to go full circle by stating that he would continue to work on wearable technology and healthcare, two of Apple’s strategic priorities, as well as various "personal passions."

Ive added that "There are products that we have been working on for a number of years. I’m beyond excited that I get to continue working on those, and there are some new projects as well that I’ll get to develop and contribute to."

What inspiration brought about choosing his new brand LoveFrom? Ive described it this way: "There was an employee meeting a number of years ago and Steve [Jobs] was talking . . . He [said] that one of the fundamental motivations was that when you make something with love and with care, even though you probably will never meet . . . the people that you're making it for, and you'll never shake their hand, by making something with care, you are expressing your gratitude to humanity, to the species.ew venture of his own, called LoveFrom — with Apple as his first client.

I so identified with that motivation and was moved by his description. So my new company is called 'LoveFrom.' It succinctly speaks to why I do what I do."

It's the end of an era marked by 20 years of Apple milestones as presented in the Bloomberg chart below. 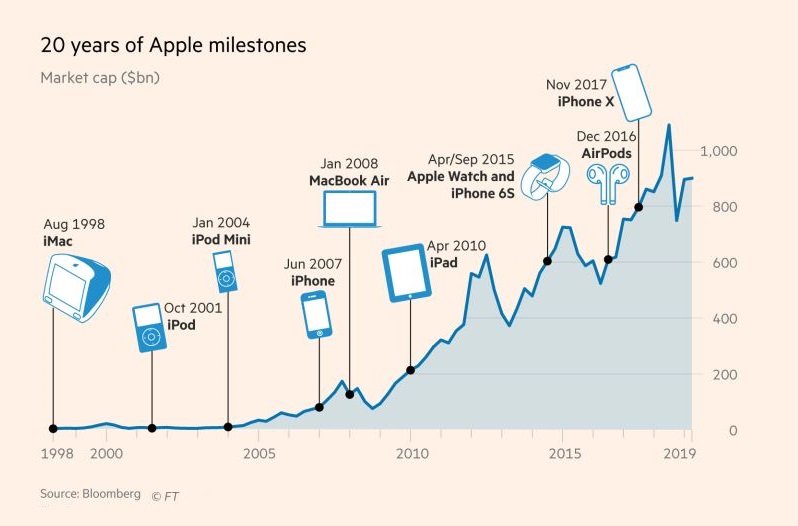 Last month, Apple held a garden party for its staff to mark the completion of the move to its new spaceship like headquarters. Ive had worked on that project for 15 years, starting back in 2004, before the iPhone was launched. The party was almost like the bow on this gift and likely Ive's true last project.

It was revealed in the Financial Time's report that Ive was to give a short speech at the garden party, only to be pulled away to and jet off to the U.K. because his father had just suffered a stroke. Most at the event were unaware of this incident.

I've later stated that "Apple Park was a really significant project that was unlike many of our others because it was for us. It also brought Apple's entire design team together for the first time into one purpose-built studio, with industrial designers sitting side  by side with font and interface designers.

With the completion of Apple Park, it also meant, in a way, that the vision for this quite extraordinary team was finally enabled. Part of the timing for LoveFrom is in some ways connected to having that very clear sense about the health and vitality of the design team." Tim Cook agreed by stating that "Perhaps the most important legacy that he leaves … is the team."

The Financial Times full report is broken down into six parts that are laid out in a side bar at the bottom left of the original report. The six reports that you can access as an FT member include:

Part One: Analysis: What Jony Ive's exit means for Apple

Part Two: Jony Ive's reasons for leaving Apple, in his own words

Part Three: The designer's greatest hits – and a few misses

Part Six: Lex: Hardware innovation is out, subscription services are in.

Part six kind of struck a chord. Those following Apple have recently seen veteran hardware and software engineers leaving Apple, including Apple's processor mastermind Gerard Williams III. Not to retire but to join new start-ups and young companies. What does that say about Apple and its future direction?

Surely it can't all be about subscriptions, as we know that Apple is working on an all-new category of products related to smartglasses and possibly a Mixed Reality headset. Apple's Project Titan continues to acquire companies and file patents. Apple's patents, while certainly slowing down, still point to some ambitious products in the works.

Though to be honest, it really wasn't a surprise to hear that Jonathan Ive is leaving Apple. Apple's MacBook and iMac haven't changed much and while the new Mac Pro is going to do well with elites and pro's, it didn't do anything for the millions of fans hoping for some fresh designs to emerge and get excited about.

Over the last two years we've seen Ive in interview after interview and yet never once did he grace the stage at a keynote event. It felt like the end was nigh and today we know it is. My only hope is that Ive's move wasn't brought on by internal politics.

At the end of the day, the Financial Times report is extensive and covers Ive's career in detail. I enjoyed the read.

I will genuinely miss Ive's pleasant English accent describing new Apple devices at keynote events – especially his European twist in saying aluminum. It was part of the Apple magic that made many events so memorable.

The Magic Man is going. If you have something that you'd like to say about Sir Jonathan Ive, please send in your comments below.