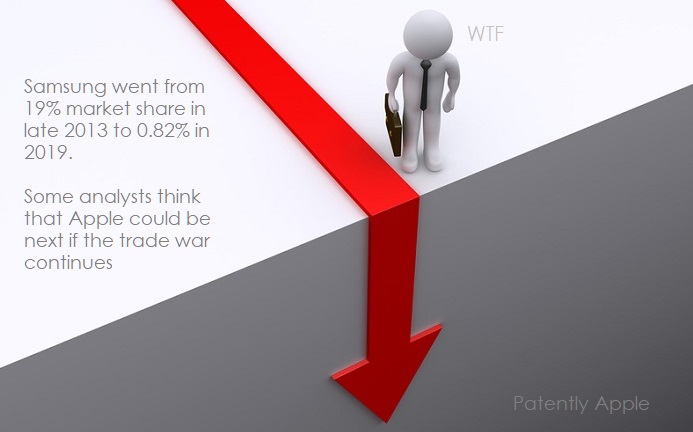 Going back to Q4 2013, Samsung was the leading smartphone brand in China by holding a commanding lead with 19% market share. At the same time Apple held 7% market share. Today the Samsung brand has been reduced to rubble, holding a mere 0.8% market share. While Apple is holding on to 8.2% of the Chinese market, according to a Korean tech report published today, some wonder if Apple can stay in the race as one of the top five for much longer. 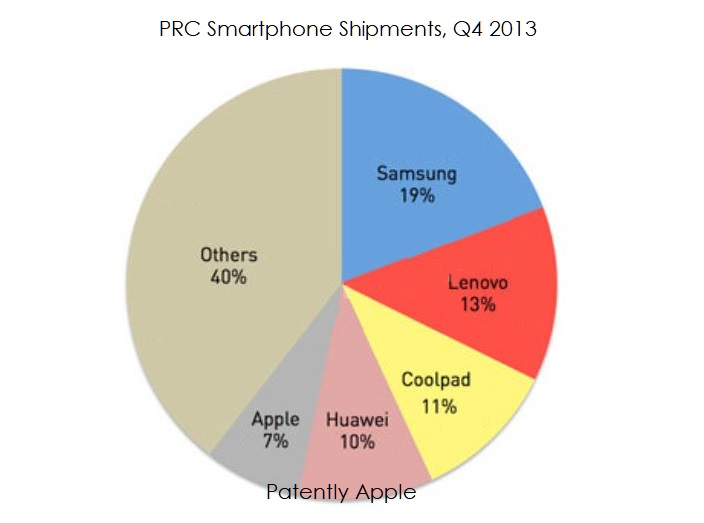 While Samsung's market share slowly eroded over the years as China's homegrown OEM's took command of their market, there was one blow in 2016 that really damaged Samsung in China. Samsung has never recovered.

CNBC reported back in September 2016 that China's state broadcaster CCTV had written a damning opinion piece on its website against Samsung stating that "Samsung acted with 'arrogance' and 'double standards' in the handling of its Galaxy Note 7 recall.

The Chinese broadcaster further railed that "Samsung made it look like they are fixing their mistakes, but in fact they are hold double standards on the recall of its products. With a less than 200 words statement, Samsung excluded China from the markets where Note 7 would be recalled and replaced. Samsung’s discriminative policies have caused significant dissatisfaction among Chinese consumers."

CNBC later added in its report that "CCTV’s condemnation is likely to hinder Samsung as it looks to continue momentum in its smartphone division in China." The campaign against Samsung finally eroded Samsung's shipments into China to a crushing 0.8% market share.

In that light, it should come as no surprise that Samsung closed one smartphone plant last year and is now in the process of shutting down its second plant.

It was reported earlier today by China's Caixin Global that "Samsung, the world’s largest smartphone producer, is cutting jobs at its last phone manufacturing facility in China, reflecting slowing sales and heating competition in the No.1 smartphone market.

The layoffs at Samsung’s plant in Huizhou, Guangdong province, are being carried out on a voluntary basis. Employees agreeing to leave with compensation will need to sign up by June 14, according to a company document seen by Caixin. It is unclear how many people will be affected by the job cuts."

The plant hired more than 6,000 workers to manufacture about 17 percent of Samsung’s global production in 2017

A Korea Herald report published today added to the story by noting that "Samsung’s headquarters in Seoul said its China entity has been restructuring the mobile set business due to declining sales over the years.

A Samsung official told the Herald that 'As part of improving efficiency in management of the China business, it is a natural step to reduce the workforce at the remaining production facility. The latest figures of employees and production capacity have been decreased, and the layoff size is not being confirmed.'

Samsung ran two smartphone plants in China. But it shut down one in Tianjin late last year due to falling profitability.

The latest downsizing of the production workforce in Huizhou raises speculations that the company could close the remaining plant and pull out from the world’s biggest phone market.

The company took a 0.8 percent share of the Chinese smartphone market, shipping 3.4 million units in 2018, which dropped the Korean firm out of the top 10, according to data from Strategic Analytics. Samsung’s US archrival Apple was the fifth-biggest player in China with an 8.2 percent share."

At the 8:48 mark of the CBS interview video with Apple's CEO, Tim Cook spoke about the trade war with China: "The Chinese have not targeted Apple, at all, and I don't anticipate that happening, to be honest."

On the topic of Huawei retaliating against Apple at some point, Cook stated: "We've had a company in China for a long time, so there is, I believe, a healthy level of respect for both sides. I don't anticipate that happening. I'm not promising it will not but I don't anticipate it."

In late December Patently Apple posted a report titled "The Tide of Support for Huawei against Apple is growing as the Communist Party Pushes for Huawei Subsidies." Eight days later Apple issued a gloomy preannouncement that they would miss the Fiscal Q1 target.

Is Tim Cook's view that Chinese are not targeting Apple in this trade war wishful thinking? Are some media outlets and financial institutions and/or analysts playing up the "informal Apple boycott" issue?

In late May, Business Insider reported that analysts have warned that the number of iPhones sold in China could halve if customers in the country continue an informal 'Apple boycott' and switch to Chinese smartphones. 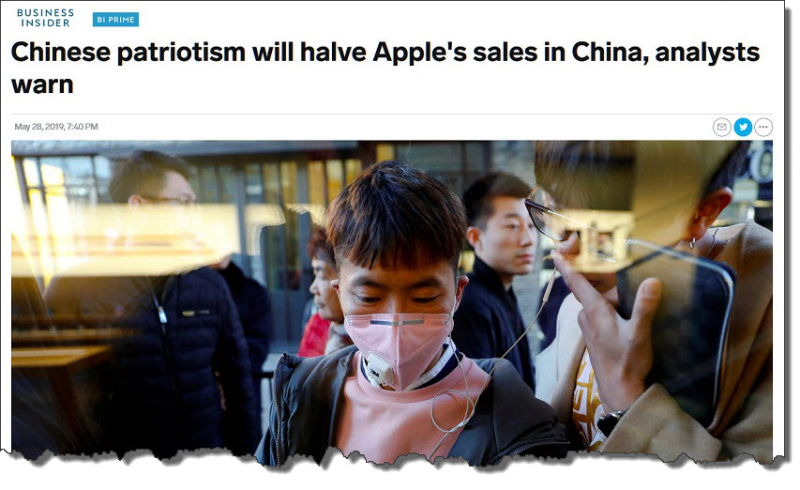 A note recently sent to customers by Citi analysts said: 'Our independent due diligence now shows a less favorable brand image desire for iPhone and this has very recently deteriorated.'"

This is a subject that's on the minds of others in media and financial circles. One example would be a Wired article that was posted on May 30th titled "If China Really Wants to Retaliate, It Will Target Apple."

During Apple's last Conference Call in April, Tim Cook stated in part: "Our year over year revenue performance in Greater China improved relative to the December quarter and we've seen very positive customer response to the pricing actions we've taken in that market, our trade-in and financing programs in our retail stores, the effects of government measures to stimulate the economy, and improved trade dialogue between the United States and China."

With the US-China trade war escalating and a possible informal boycott in play, we'll just have to wait for Apple's fiscal Q3 financials to be made public in July along with Tim Cook's commentary to see if these factors are playing any part of a down turn in sales. To a certain degree, it's Apple's financial numbers that will tell the real story.

A large part of Samsung's fall was due to the fact that their smartphones run on Android. Chinese consumers had many alternative local brands running on Android to choose from and they did just that.

On the flip side, Apple's iPhone is based on iOS with an immensely strong ecosystem that makes it much harder for fans to switch.

So while it's easy to find a few hundred patriotic Chinese fans or a thousand loyal communists in a sea of 1.4 billion people to rail against Apple in the face of media cameras for show, Apple should be able to whether a slowing Chinese market overall.

Apple knows what's at stake in China and will do whatever they have to in order to stay in the race. Yet with that said, Apple has no control over the political side of the ledger. Any surprise that could possibly hurt Apple would directly come from rising tensions in this trade war. On that point, no one can predict what's to come.

Here's to hoping that Apple has a major iPhone upgrade in September that will be able to change the subject away from the escalating trade war.