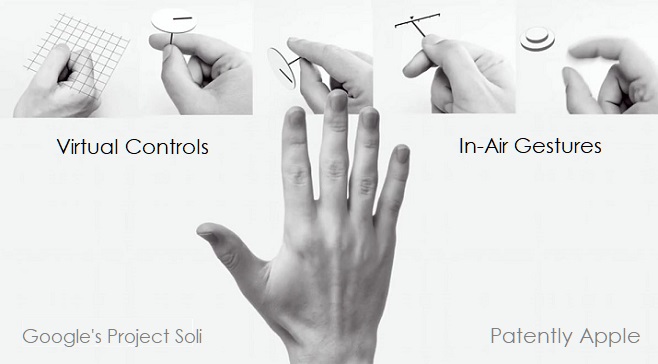 Back in January Patently Apple posted a report titled "Google won a Major Patent for an In-Air Gesturing System last Month and now the FCC has just approved its use." Our Patently Mobile IP blog has covered a couple of Google patents relating to a future in-air gesture system based on radar (01 & 02) with one dating back to 2016. In March we posted a report titled "Apple Patent Covers In-Air Gesturing for Macs & iDevices as Google, Samsung and Microsoft race to bring this to Market."

Another report on the matter was posted back on March 3, 2018 wherein Apple supplier Finisar pointed to next-gen trends with "gesture recognition" being one of them. The video in our report just disappeared as it did on YouTube. Was Finisar's VP-GM Curtis Barratt not to make that feature for Apple public knowledge? Below, under our bottom banner, you'll see the original YouTube code for that video that was pulled.

Other than that Finisar video being mysteriously pulled, there have been no leaks or hints that gesture recognition will be making its way to 2019 iPhones unless it's to be a complete surprise.

On the flip side, rumors are now beginning to emerge that Google's long-standing 'Project Soli' may finally launch with their next-gen Pixel 4 smartphone later this year.

Yesterday, 9to5Google's Stephen Hall reported that he's heard that the Soli radar chip is likely to be integrated in the next-gen Pixel 4 smartphone from Google to be used for in-air gesture based controls. Other applications rumored for the Soli Chip is their smart speaker 'Google Home' along with a Google smartwatch which has been demonstrated at past Google I/O events.

Yesterday Canada's Vlogger from 'Unboxed Therapy' was talking about the case plates for the upcoming Pixel 4 which showed an ugly camera blotch on the rear for 3 cameras and flash, similar to the rumored iPhone design.

Report Update: 12:25 p.m.: Google posted Pixel 4 images with the ugly camera blotch on Twitter this afternoon as shown below.

Well, since there seems to be some interest, here you go! Wait 'til you see what it can do. #Pixel4 pic.twitter.com/RnpTNZXEI1

In that video Lewis Hilsenteger talked about the Pixel 4 offering 5 camera components for facial recognition to compete with the iPhone Face ID feature. Yet this kind of camera setup could easily support gesture controls because gesture controls require a 3D depth camera system in order to accurately interpret in-air gestures in realtime. In turn, this supports the rumor that the Pixel 4 phone will include the new Soli chip for gesture recognition functionality later this year.

The XDA Developers blog posted a report yesterday titled "Google is working on new gestures that require an “Aware” sensor, possibly for the Pixel 4."

The report noted that "in summary, Google is working on a pair of new gestures in Android Q. The two new gestures are called 'Skip' and 'Silence' and they’re likely controls for media playback, although the gestures are far from complete so there’s no way to activate them to test for ourselves.

XDA presented a number of lines of Google code referring to 'aware' and 'silent' which is interesting. They believe the gestures are to control music functionality.

As we noted back in March, the race to introduce gesture controls on smartphones and other devices from Apple, Google, Samsung and Microsoft is on. The drum beating the loudest for this feature is coming from the Google camp.

Will Google's implementation of gesture controls rumored for the Pixel 4 be a yawner or will it strike a chord with consumers? Will Apple's 2019 iPhone challenge Google's Soli with its TrueDepth camera and A13 Bionic chip advances? Only time will tell.

A head-to-head battle on this front this year would be a lot of fun for both fan bases who love to mock each other at every opportunity.

Knowing that this class of technology is now getting a lot of attention due to Google's Soli chip, I spent 4 hours earlier today setting up a new patent category that you can find on our blog's left sidebar titled "In-Air Gestures, Gestures" that covers patents dating back to as far as 2014. This will help Patently Apple fans and visitors to keep on top of Apple's patents in this area of technology.

The latest patent on this technology was posted in a granted report posted yesterday titled "Apple Wins a Major Hover Control Patent that extends to Apple Pencil on iPad Pro and In-Air Gestures."

In total there are 34 patents in this new category which covers a lot of work on the technology being applied to future Macs, with the iPhone and Apple TV. A few general gesture patents are included that don't relate to the in-air class.

The majority of the research and patents on record for Apple derive from the PrimeSense Israeli team that Apple acquired back in late 2013. Microsoft's Kinect was based on PrimeSense technology, so they've certainly proved to have a solid track record of delivering depth camera technology commercially that Apple could one day take advantage of.

Video pulled: The original YouTube video code covering Finisar talking about future trends and mentioning "gesture recognition" as being one of them was pulled after our report.