Patently Apple was first to discover a European patent filing by Apple on the subject of 8K Foveated Micro-Displays for a future video headset in February 2018. We followed up with more reports on foveated displays in March and August 2018. Last week we posted a new report titled "Apple continues to Work on Future AR/VR Headsets that could use Displays as high as 8K." Today, the U.S. Patent & Trademark Office published yet another patent application on Apple's future 8K foveated display technology.

Every new foveated display patent that we discover introduces a new aspect to this project. In today's patent filing, Apple points out that an electronic device may have a display and a gaze tracking system.

The gaze location may be updated in real time based on information from the gaze tracking system.

Apple's patent FIG. 1 below is a diagram of an illustrative electronic device having a display; FIG. 2 is a diagram showing regions on a display with image data of different resolutions. 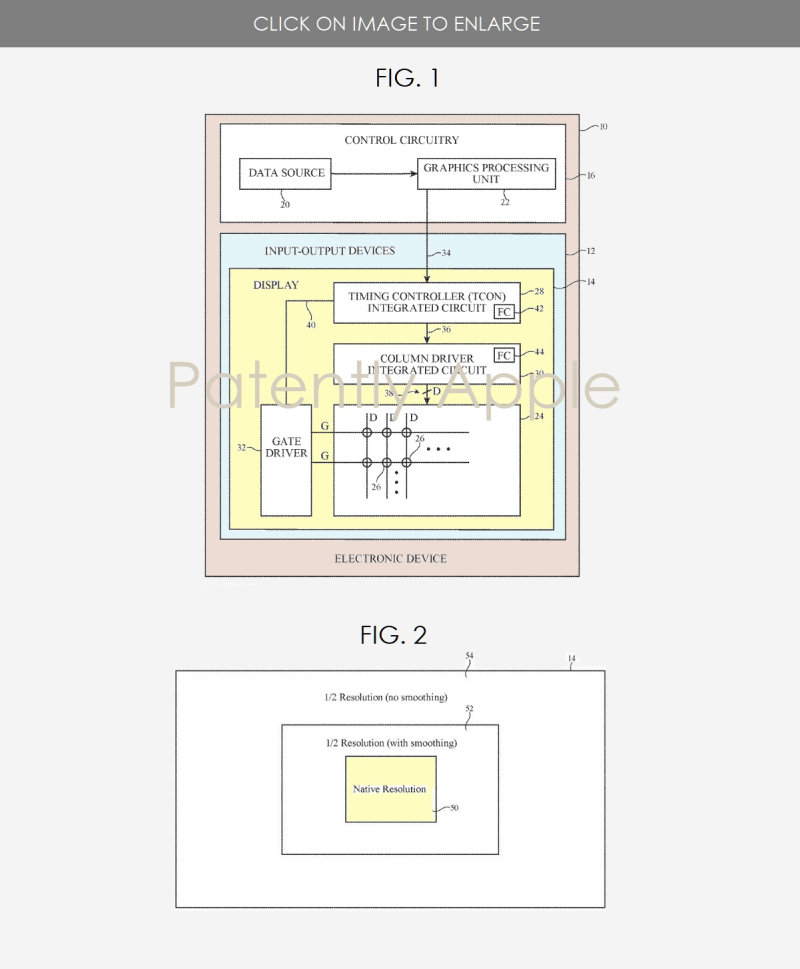 Input-output devices may include one or more displays such as display #14. The display may mounted in a housing for a computer, cellular telephone or other device, may be mounted within a head-mounted display chassis (e.g., device #10 may be configured to be worn on the head of a user), may be mounted on a wall or on a stand, may be a projector, or may be any other suitable type of display.

Control circuitry #16 may be used to run software on the device such as operating system code and applications. During operation of the device the software running on the control circuitry may display images on the display. For example, data source #20 may supply graphics processing unit #22 with information on three-dimensional images to be displayed on the display. Data source may, for example, be part of a computer game or other application running on control circuitry that supplies output to graphics processing unit in the form of three-dimensional coordinates.

The Graphics processing unit may perform rendering operations that map the three-dimensional coordinates from data source #20 onto a two-dimensional plane for presentation as two-dimensional images on display. Other types of image content may be display, if desired. 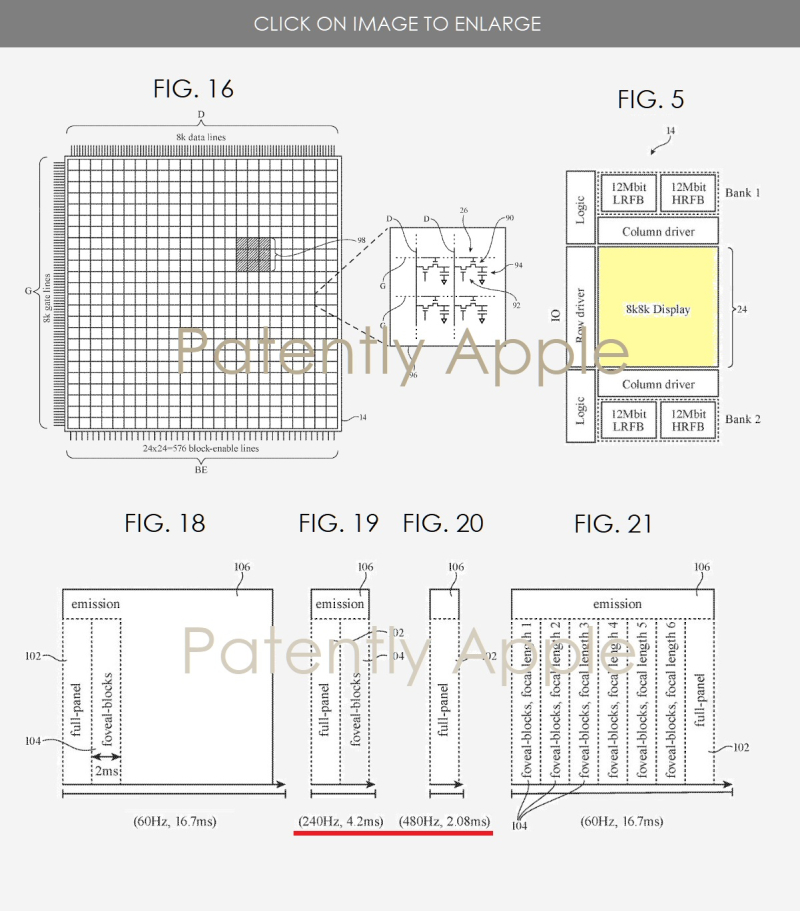 Apple's patent FIGS. 18, 19, 20, and 21 above are illustrative data loading techniques for supplying a display with data.

Being a little more specific in respect to Apple's patent FIG. 16 above, Apple notes that in the example of FIG. 16, a 3X3 set of blocks (block group #98) is being provided with high resolution data based on eye tracking information (e.g., based on the measured location of a user's gaze, which is overlapped by group #98).  During high resolution data loading, the block enable transistors of the blocks in group #98 may be turned on to allow high resolution data to follow into the pixels of group #98.

Apple's patent application 20190180672 that was published today by the U.S. Patent Office was originally filed back in Q1 2019 but shows a history going back to 2016. Considering that this is a patent application, the timing of such a product to market is unknown at this time.

Considering Apple's foveated display technology could likely debut on a future Apple headset, it was interesting that earlier today we posted another patent report on Apple inventing a way to create smoother CGI scenes for VR headsets that could eliminate Eye Strain and/or Nausea.

Here's to hoping that Apple's ongoing headset patent activity will turn into to a cool product in the not-too-distant future (as in 1 to 3 years).